British Airways has re-opened its airport lounge in Johannesburg with a new look.

In May we announced that the British Airways lounges at Johannesburg were closing for complete refurbishment. It is one of the first international lounges to get the new lounge concept BA first revealed in 2018 and which, in all fairness, is really very classy.

The refurbishment follows the same vein as the recent re-fits in Aberdeen, Rome and San Francisco. It’s best not to mention the sterile new JFK lounges which re-opened over the Summer and, unfortunately, do not follow the same design concept.

The Johannesburg lounge covers 880 square meters, making it a little larger than the recently re-opened San Francisco lounge. There is space for 247 passengers in a range of ‘zoned areas’. It features the now-standard bar that is in all of the new lounges: 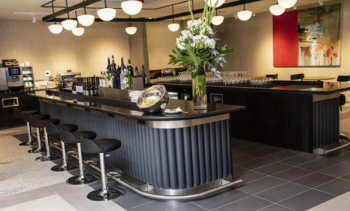 British Airways flies two A380s to Johannesburg every day, with each one carrying up to 111 Club World and First passengers with lounge entitlement before you factor in those travelling with BA Gold or Silver status, or oneworld equivalent, in other classes. Luckily the flights are offset by two hours so hopefully it is not too crowded unless one flight is delayed! 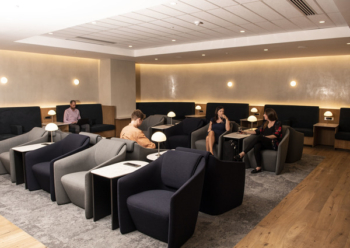 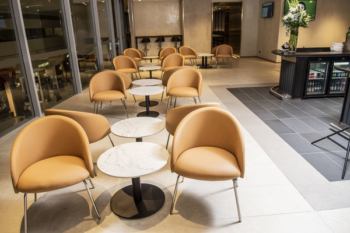 Instead of having separate First and Club lounges, British Airways appears to be moving to a single-lounge concept in which facilities are shared with the exception of a ’boutique dining area’ that is exclusively for those travelling in First. Gold card holders do not get access. 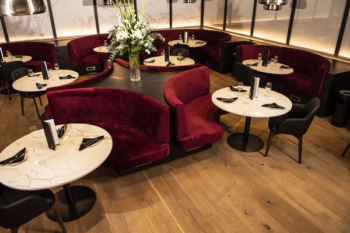 This is probably not a bad idea given the size of the First cabins, although it depends on the execution. If the lounge as a whole is more first than business it is clearly an upgrade. If it is more business than first then it is clearly a downgrade for Gold card holders.

Those not travelling in First get access to the usual buffet: 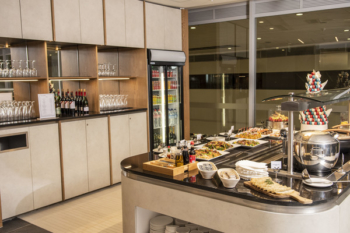 This is (I think) the first time the press office has released an image of the bathrooms in a new lounge, which look good: 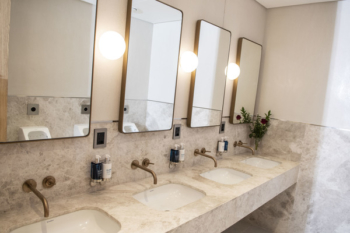 The photos make it hard to get a sense of the space – it feels like the lounge is several quite separate ‘rooms’ that all connect. If so, this may have the effect of breaking up the space and giving it a cosier feel.

Regardless, the new lounge concept is very good and often a genuine step up from what was offered before.  Johannesburg is lucky to be one of the first to see it.

The next lounge to have a makeover will be Geneva which is scheduled to re-open before year end. I expect we will see more lounges undergo refurbishment in 2020, although it is not clear if and when the Heathrow Terminal 5 facilities will feature the new concept.