British Airways has been fitting its planes with wifi since 2017, and is gradually making progress in rolling it out across its fleet. We thought it was worth revisiting the subject to see which British Airways flights now let you browse the web (for a chunky fee) in 2020.

Availability and pricing varies depending on the aircraft and whether it is part of the long haul or short haul fleet. You can see which aircraft type is operating your flight by going to ‘Manage My Booking‘ at ba.com and clicking on the detailed flight information.  Alternatively, do a dummy booking for your flight at ba.com and click on the flight number on the flight selection page.  This will bring up a pop-up box which includes the aircraft type scheduled to operate your flight.

Does British Airways have free wi-fi?

Unfortunately not.  You don’t even get the free short trial which many other airlines offer.

British Airways does not offer free wifi to its customers, although it is currently trialling free wifi packages for those travelling in First Class.  If you are flying in First all you need to do is enter your seat number and surname, or booking reference, and you will be automatically connected.  Not all aircraft with a First Class cabin are wifi enabled, of course.

If you reading this article months after its original publication, this detailed thread on Flyertalk provides the most up-to-date information.

The ‘official’ ba.com wi-fi information page is here.  It is out of date, however, as it says “By 2019 we expect to have 90% of our aircraft connected” which as you will see is far from accurate.

What does British Airways charge for long-haul wi-fi?

British Airways has two wi-fi packages available for purchase if you are on a long haul flight.  This is a basic ‘Browse’ package as well as a faster ‘Stream’ option. The pricing is as follows:

It is not ‘gate to gate’ wi-fi.  It only kicks in when the aircraft is at altitude, and will not work when passing through the airspace of certain countries.  The good news is that – because British Airaways was late to wi-fi – it has 2nd generation technology which should offer decent speeds even when there are many concurrent users.

A318 – This is the aircraft that operates the all-business flight from London City to New York via Shannon (review here!). It does not currently have wifi installed and it is not clear whether British Airways will be installing it.  Let’s be frank – this aircraft doesn’t even have IFE (passengers are given a pre-loaded iPad instead) so wi-fi may be a step too far!

A350-1000 – British Airways had its first A350 delivered in 2019 and they are getting wi-fi factory-fitted.  This means that 100% of BA’s A350 fleet will have wifi, although the pricing varies from the rest of the long haul fleet.  Rather than charging per hour, the wifi on the A350 is limited by usage:

A380 – All A380s currently in service offer wifi, and British Airways is in the process of upgrading the final aircraft.  I recently tested the wifi on BA’s A380 and it worked quite well.

Boeing 747 – British Airways is one of the last airlines to have a significant fleet of 747s and is planning to phase them out completely by 2025.  Currently around half the fleet is wifi enabled.  It is unlikely that the remaining aircraft, due to leave the leave the fleet in the next 12-24 months, will be upgraded.

Boeing 777 – British Airways has two variants of the 777. Frustratingly, they do not differentiate between the two in ‘Manage My Booking’. Whilst the vast majority of the 777 fleet is fitted with wifi, there are a handful of stragglers (777-200) that do not currently have it and will not get it due to imminent retirement.

Boeing 787-8 – Bad news here, as unfortunately the 787-8 fleet will be the last aircraft type to be upgraded with wifi. Currently, no aircraft of this type have in-flight connectivity.

Boeing 787-9 – Unlike its smaller brother, the 787-9 fleet is currently undergoing wifi installation.  Just over half of the fleet currently have connectivity.  If you are on a Boeing 787 and it has First Class, it is the 787-9 variant.  If it does not have First Class, you are on the 787-8 and out of luck. 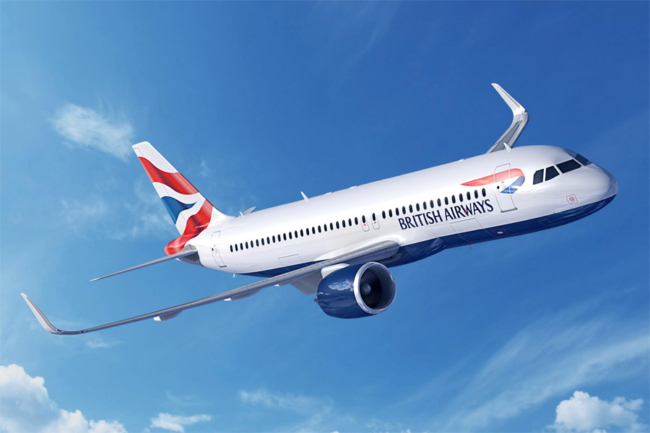 What does British Airways charge for short-haul wifi?

There are two options to purchase wifi on short haul routes. The first is a messaging-only functionality, which lets you use iMessage, Whatsapp and other messaging services (although don’t expect images to load). The other is ‘Browse and Stream’, which theoretically lets you surf the web and load images and videos. The pricing is as follows:

It is very hit and miss with short-haul, unfortunately.  To be fair to British Airways, it has been very low key about the addition of wifi to its fleet and is not planning to aggressively promote it until the majority of customers can receive it.

A319 – only four of this aircraft currently have wifi, and the rest will not be upgraded since the plan is to retire these in the short term. Bad luck!

A320 (including the new Neo variant) – just over half currently have connectivity with the remaining aircraft yet to receive it.

A321 (including the new Neo variant) – about one third of this aircraft type currently have wifi.

As you can see, your chances of being on a wifi-enabled flight vary drastically depending on which aircraft type you are on.  In general, the long haul fleet is better equipped and will continue to improve as older aircraft are retired and newer ones replace them.  When the service is more widely available, it would be good to see a range of subscription or ‘pay with Avios’ packages available.

PS.  If you missed it, take a look at our recent article on the top 10 reasons to get the FREE British Airways American Express credit card.