This is our review of the new Courtyard by Marriott Inverness Airport hotel.

In our article yesterday, we looked at why Inverness Airport has become an attractive starting point for people looking to save on Air Passenger Duty.  As airports in the Scottish Highlands are exempt from APD, you can save up to £173 per person by starting a long haul BA flight here with a connection in Heathrow.  Even better was the fact that British Airways had been running a series of especially good flight deals, with savings far beyond the APD differential, from Inverness.

One reason we don’t discuss these much is that it was inconvenient unless you were doing a back-to-back, returing immediately on the same BA aircraft from Heathrow.  For everyone else, in order to guarantee that you didn’t miss your flight from Inverness – which would be the first part of your long-haul ticket – you needed to stay overnight.  The airport lacked a hotel and accommodation in Inverness itself had poor feedback for quality and value.

The situation has now changed.  There is a brand new Courtyard by Marriott hotel directly outside the front door of Inverness airport.  I thought we should take a look.  HFP paid for its own room and the hotel did not know we were reviewing it.

The official hotel website is here if you want to find out more.

What is Courtyard by Marriott?

My experience of the Courtyard brand is slim.  There was once quite a few in the UK but the brand virtually disappeared, with many becoming Holiday Inn hotels.  It is now having a bit of a renaissance, with a Courtyard by Marriott Luton Airport opening last March (website here, we haven’t reviewed it yet).

None of these would have been deal breakers if they were not there, but together they made a noticeable difference.

Where is Courtyard by Marriott Inverness Airport?

I’m always suspicious when people say ‘you can’t miss it’ but, as the hotel is the only building in the area, it is true in this case.

Walk out of the door, look left and there it is: 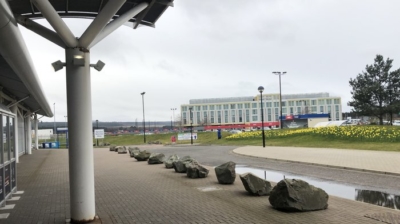 You can cut through the car park or there is a slightly longer footpath around the edge of the airport which would be easier with luggage.

Here is the exterior.  This is a PR photo as it was too cloudy when I arrived to really catch it well! 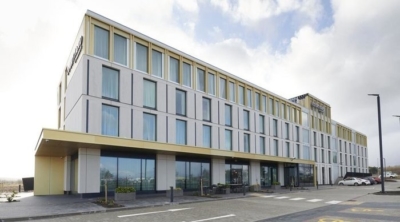 Check-in was friendly and efficient although with no mention of my Marriott Bonvoy Titanium privileges.

Here’s the thing.  As a Titanium member, I should be offered 500 Bonvoy points or a $10 food and beverage credit as my welcome gift.  If I am not offered it during the check-in process, the hotel has to pay me $50 cash.  No excuses allowed.  (The compensation goes as high as $100 at some Bonvoy brands.)

And yet …. the hotel had only been open a week.  The woman who checked me in was very young and potentially in her first job.  The hotel seemed to have around 10 guests and I doubt it is getting busier in a hurry.

I didn’t feel right whacking them for $50 cash (not room credit, the rules say cash).  To be totally honest, I also didn’t fancy the 20 minute conversation with the manager which would have been required to trigger the guarantee, as it must be claimed whilst you are on the premises.  I wasn’t even sure it was a good use of my time, so I let it slide.

My room at Courtyard Inverness Airport

I was given what is probably the best room they have, given the lack of suite upgrade options!  It was on the top floor, on the side overlooking the airport.  This gave me a decent view of the aircraft, terminal and hills beyond: 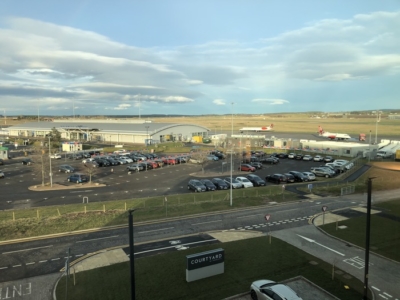 You can just see two Loganair aircraft in the image above.  Here is the room itself: 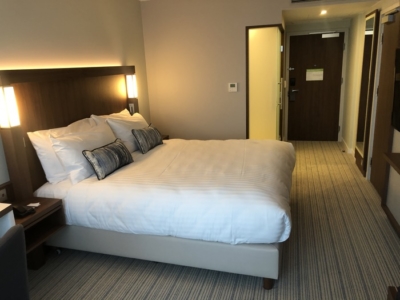 and (note the proper wardrobe, kettle and the empty fridge and safe in a cupboard under it): 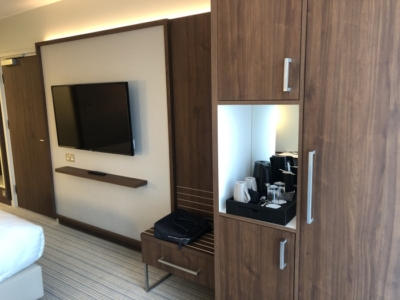 Whilst I didn’t try it, the TV system allows you to cast content from your phone or PC onto the screen.

There was a decent desk, with a socket under it and two additional sockets, plus 2 x USB sockets, next to the bed: 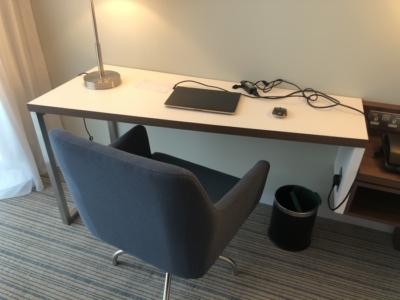 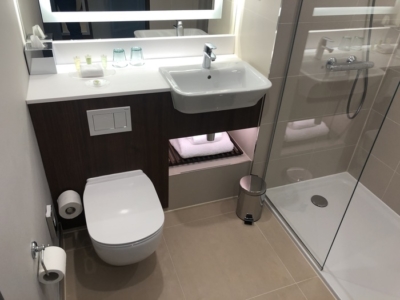 All in all, I was impressed.  My only gripe was the heating, which eventually worked OK but is confusing to understand.  The control panel has eight separate buttons on it …..

Here is a picture of the ground floor fitness room.  There are a few weights as well, plus disposable headphones: 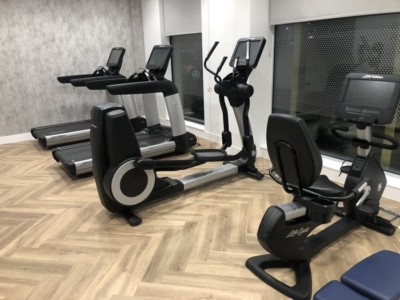 The lobby area at Courtyard Inverness

Next to the lifts is the little mini market.  I liked this – you could buy a microwavable snack, toiletries, wine and beer and ice cream: 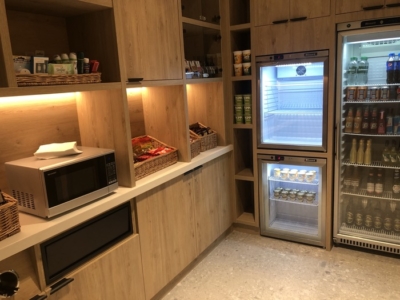 And it was well stocked with ….. 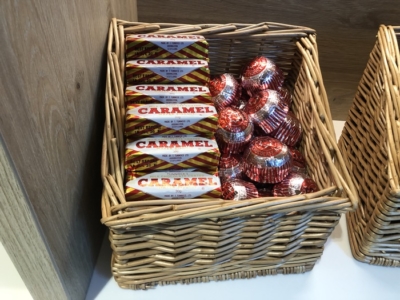 The rest of the lobby is open plan.  In the picture below, you have the bar to the left and the reception area in front of it: 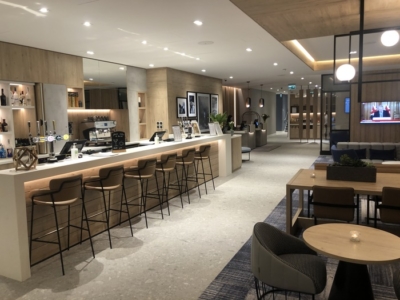 and this open plan seating area: 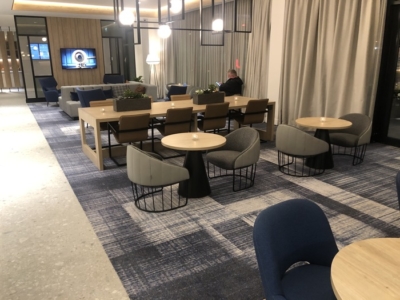 I liked it – there were a few guidebooks scattered around and it was fairly homely, although some more tourist leaflets etc wouldn’t go amiss.

At the back is a small working area, although as the rooms have decent desks I think you would only need to use this if you had any printing requirements: 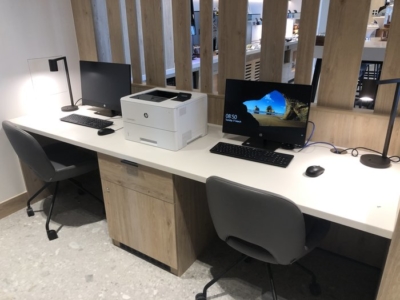 In the evening, I had a chicken burger and a can of Brewdog Punk IPA.  The good news is that the burger was very good with two large slabs of chicken breast. 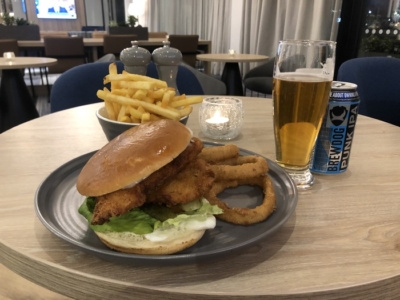 The downside was the price – £21 for the burger and the beer.  You can just about, at a push, get away with this in West London but possibly not in Inverness.  I had only paid £66 for my room.

To be fair, I had the option of microwaving something from the mini market.  You can also do the 90 second walk back into the terminal, although the restaurant shuts when the last aircraft departs, which was 7pm on the day I was there.

The next day, breakfast was served from a long table at the back of the lobby area: 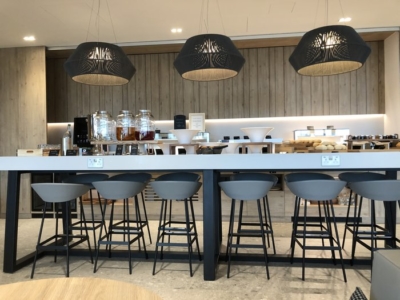 It was a decent selection of cereals, fruit, pastries and hot items (sausages, beans, scrambled eggs etc).  There was no printed menu available but I was told the kitchen would also cook any other egg dishes I wanted. 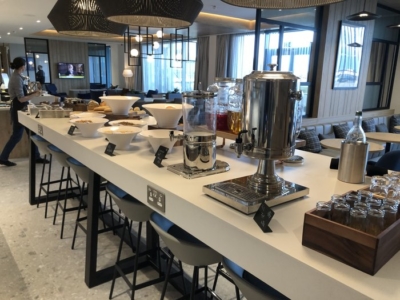 Breakfast is not free at Courtyard hotels even for elite members.  That said, I was not charged – the hotel had decided to drop its buffet for a few weeks and was moving purely to ‘cooked to order’ the next day whilst guest numbers were low, and they were encouraging all the current guests to eat up their stocks!

How was the Courtyard by Marriott Inverness Airport?

I liked it, and I recommend it.

Inverness Airport desperately needed a hotel like this.   Apart from the slightly utilitarian room decor, everything else met or exceeded my expectations.

Given the, ahem, broad spread of accommodation found in tourist areas like Inverness, I also think it will pick up business from people who aren’t actually flying anywhere.  It is a great option for anyone looking for a good value, clean and professionally run place to stay.

This is a Category 3 hotel with Marriott Bonvoy.  Rooms cost between 15,000 and 20,000 Bonvoy points per night depending on whether it is off-peak, standard or peak.  Given my 0.5p valuation for a Marriott Bonvoy point, redemptions could be good value when rooms go over £100 as I imagine they will in Summer.

The Courtyard by Marriott Inverness Airport website is here if you want to find out more.

PS.  If you missed it, here is our recent article on 10 good reasons to get the Marriott Bonvoy American Express credit card.