You certainly can’t file this one under hot news, because it took place immediately after New Year.  It happened totally under my radar, which is additionally embarrassing because I walk down Piccadilly on a regular basis and we often have HfP client meetings on Dover Street which backs on to the hotel.

It appears that the Holiday Inn London Mayfair closed on 2nd January.

This isn’t totally surprising.  The hotel was not in great shape internally and it isn’t a hugely attractive building either, although I think the shell may be staying. 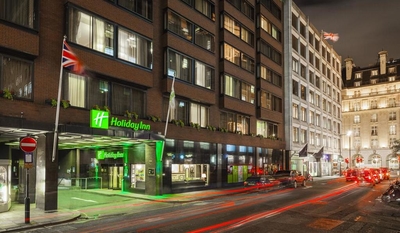 It was because the hotel was such an anachronism that I recommended it.  I always included it on my list of ‘best IHG Rewards Club redemptions in London‘.  You could stay in the heart of Mayfair, virtually opposite the Ritz, for peanuts, relatively speaking.  A few seconds away in the other direction was The May Fair hotel, run by Radisson, which is also very high end.

If you look at the photograph of the hotel above, you see a small part of the Ritz on the right.

The Holiday Inn Mayfair had big rooms – probably bigger than standard rooms at the Ritz! – and a family could often pick up a room with two double beds for a standard reward redemption.  In 2017 I booked a couple of nights during a promotion when it was £35 per night and used it for hot desking space, just for the novelty value.