If you’ve been reading the Head for Points comments section, you will know that many readers have been discussing how ‘Section 75’ can help get them refunds from airlines or hotel groups which are not rushing to return their money.

‘Section 75’ is industry shorthand for part of the Consumer Credit Act 1974 that makes your credit card provider jointly and severally liable for any breach of contract or misrepresentation by a retailer.

It allows you to make a claim against your credit card company to get your money back if a retailer does not honour their side of the purchase, whatever that may entail.  This includes failure to perfom due to bankruptcy.

Under the Consumer Credit Act 1974, the credit card company is jointly liable with the retailer for anything you buy as long as you spend over £100 and under £30,000.  You can charge as little as £1 to a credit card to get the coverage, but the total purchase must be over £100.  You can claim up to six years after the original purchase.

(There is a quirk to the rules which will apply to flight transactions.  If your total spend for your family was over £100 but each individual airline ticket cost under £100, Section 75 will not apply.  The same applies if you bought four shirts for £30 each from a clothes shop.)

This is one of the most consumer friendly pieces of legislation around.  I’m never sure if the credit card companies are pleased it exists, but it is a great advertisement for using a credit card instead of cash or a debit card for major purchases. 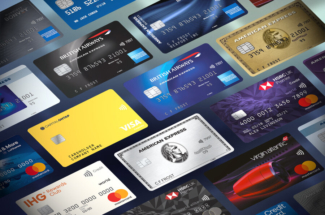 Does Section 75 only apply to credit cards?

American Express charge cards are not covered – including the The Platinum Card.  However, Amex chooses to voluntarily match Section 75 protection although it is not legally obliged to.

Section 75 only applies if you paid directly.  If you used an intermediary such as PayPal or Curve then you cannot claim under Section 75 although both companies have similar, but not as legally strong, remediation schemes.

What happens if I paid with a debit card?

There is a separate mechanism called ‘chargeback’ which can be used if you made a payment with a debit card or if your credit card payment was for less than £100 per ticket.

A chargeback allows your card issuer to reverse your payment.  You receive a refund and the money is taken back from the airline, hotel etc involved.

Visa, Mastercard and American Express have signed up the chargeback process.  However, you need to understand that this is a voluntary scheme and you have no legal right to receive a refund.

How do you make a Section 75 claim against American Express?

Given current events we thought it would be helpful to have an article about the process of initiating a claim on an American Express card, as many people are unfamiliar with the process.

Unfortunately nobody on the HFP team has ever needed to process a chargeback on Amex, so we asked regular commenter Dean to help us out.  Over to Dean:

“Firstly, decide whether you have a valid basis for the refund, i.e. did British Airways cancel your flight and so under EC 261/2004 make you legally entitled to a cash refund?  Has the retailer promised a refund but they’re saying you’ll have to wait six months?  If so, it might be time to raise a dispute.

Note that with American Express, the dispute raising process is the same for both credit cards and charge cards.  However, credit cards have legal force under Section 75 of the Consumer Credit Act (1974), whilst charge cards only have Amex’s own voluntary process.

To raise a dispute you need to login to the Amex website on a desktop computer and not the app.  Navigate across the top menu to ‘Statement’ and then to ‘Your Card Activity’ (click to enlarge):

Click into the transaction and then click on the text at the bottom, ‘Have a question about this charge?’. 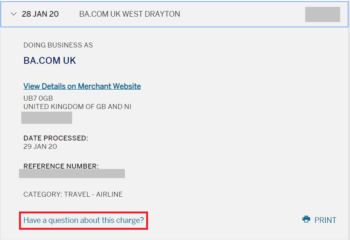 You’ll then need to answer a number of questions related to the dispute.

If Amex asks for it, you will need to upload any evidence you have, e.g. any correspondence with the retailer, notes from any calls, any refund promised etc. 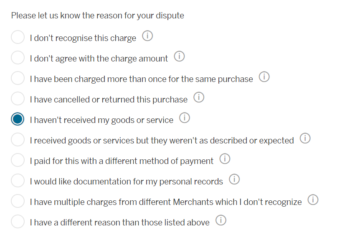 The dispute you’ve raised appears on the ‘Your Card Activity’ page. Clicking on ‘Dispute Activity’, on ‘Open’ and then the dispute itself displays details related to the dispute along with an expected resolution date.

I created a dispute for a Qatar Airways flight on 6 April and a ‘Credit for Disputed Charge’ amount hit my Amex statement three days later. I still have to wait potentially until 29 May for Amex to investigate with the retailer and to receive a final decision on the dispute.  American Express will reclaim the money from my account if they refuse my claim.

Amex appear to have a risk based approach to such disputes.  For smaller disputed amounts I have found that the case was closed straight away with no investigation. You will receive a letter in the post once the dispute is closed.

You could of course call American Express or use the chat function to open a case, but the self-service option I outline above is likely to be much quicker these days.”

Please remember, before initiating a Section 75 claim, that it creates a lot of work for both American Express and the airline or hotel company involved.  Virgin Atlantic, for example, is quoting 100 days at present to refund money from cancelled tickets.  If you are in immediate need of the money then you can raise a Section 75 case and you will receive it more quickly, but if you can sit it out then you are doing everyone a favour.  Your money is not risk at the end of the day – if a company which owes you a refund does fail, you are still entitled to your money under Section 75.