What is international flying like now that airports and airlines are reopening?

Since the Government eased restrictions on international travel last week airlines have been relaunching an increasing number of routes. Like everyone else, I was curious to find out what had changed as part of the travel experience. Would it be virtually the same as before or are we entering a whole new world?

BA CityFlyer, London City Airport and the Ibiza Tourism Board had the same idea and invited me to experience how airports, airlines and hotels are adapting.  There will be another article in a few days looking at the hotel I stayed at, and a chat with Robert Sinclair, CEO of London City Airport.

Getting to and through London City Airport

If you’ve been on public transport in recent weeks you’ll know how eerily quiet it is. Even at rush hour tube carriages are virtually empty, which makes social distancing easy. Getting to London City is as easy as it ever is, which for me involves hopping on the Northern Line and changing at Bank to take the DLR all the way east. 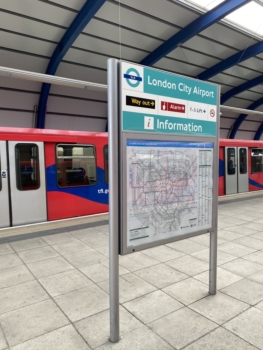 London City Airport station is much like a ghost town at the moment. I was one of only a handful of people to get off – it’s clear that travel is still at the very beginning of rebooting.

City Airport has introduced a number of measures to ensure that travelling is as safe as it possibly can be. There is a one-way system to enter the terminal building, which also includes a discreet temperature monitoring station. I wouldn’t have noticed this if the woman in front hadn’t been asked to go through again as she was wearing a hat! 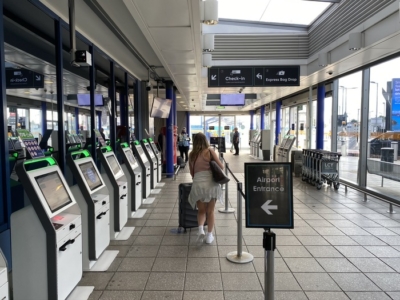 The terminal itself is very quiet. I was surprised how few people were actually travelling. Whilst a handful of flights had already departed that morning there were only two scheduled mid-morning departures. 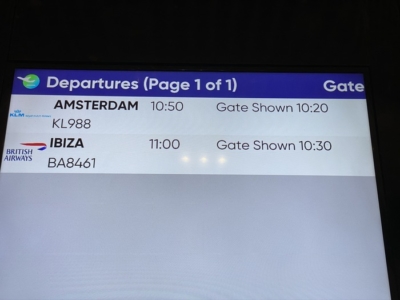 Security was a breeze, with no queue at all. Perspex screens have been fitted: 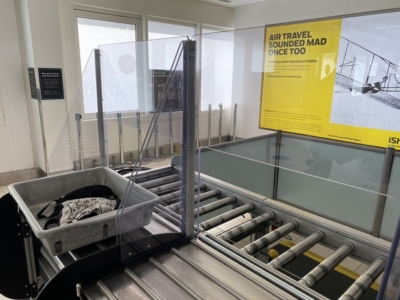 …although admittedly I was somewhat out of practice with the security process, almost forgetting to empty my pockets and take off my belt!

Whilst London City does have some duty free shops, these were virtually all closed: 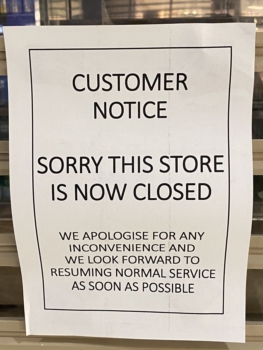 Only WH Smith, Boots and a Caffe Nero were open, although it looks like the duty free boutiques are preparing to re-open as the lights were on and staff were busy. 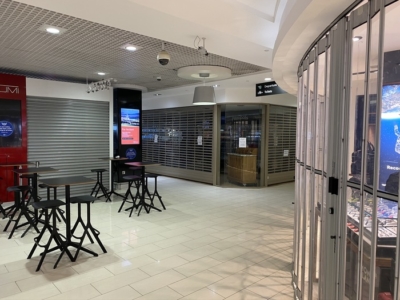 Whilst waiting, I had a chance to chat with Robert Sinclair, CEO of London City Airport.  I will cover this in a separate article in a day or so.

Boarding commenced by row number. Again there were perspex screens when scanning boarding passes as well as a couple of security guards ensuring that everyone is wearing a mask. I was told that on a previous flight one passenger had refused to wear one and was not permitted to board, so at least it is being enforced on board. 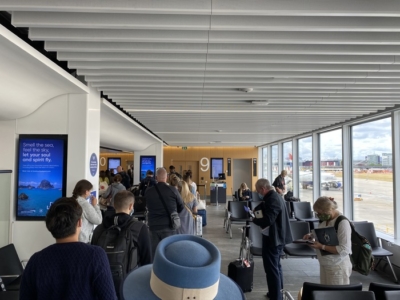 BA CityFlyer is an interesting operation, running autonomously inside the main airline.  It is based in Didsbury near Manchester and also has a base in Edinburgh, currently scheduled for closure as part of the British Airways coronavirus-related cuts.

BA CityFlyer operates a fleet of Embraer aircraft, primarily Embraer 190s.  These have 2 x 2 seating throughout.

It also means that Club Europe is of less value from London City Airport, since there is no British Airways lounge and you do not benefit from an empty middle seat.  The only upsides are better meals (the food from London City is generally seen as better than the Heathrow meals), seats towards the front of the aircraft and additional Avios and Executive Club tier points.

Inside the aircraft everything was fairly normal. Whilst inflight magazines have been removed, safety cards were still available and looked brand new. 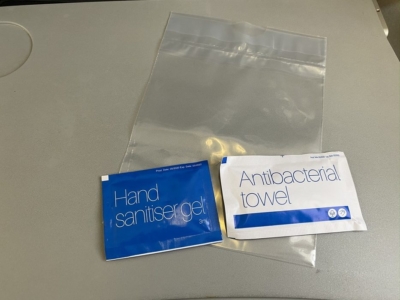 Oddly, this wasn’t available at the seat but was handed out after take-off, which is less helpful if you want to use the wipes to wipe down your seat and tray table. Some readers on Instagram have said that these packs are available on boarding from Heathrow, so this may be a specific BA CityFlyer policy.

The crew also announced a reduced food service, which consisted of a snack and some water in economy. The cabin crew came round filling out these paper bags at your seat: 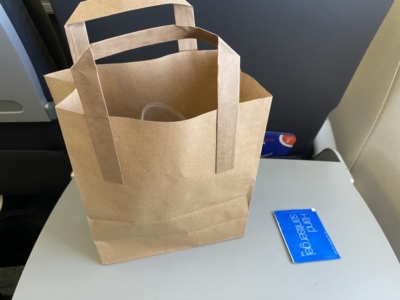 To be honest, I’m slightly confused what the paper bag is for since they are not pre-packed and the crew make up your meal kit there and then! It doesn’t reduce the touchpoints on the meal service (crew wear gloves, anyway) and simply appears to increase waste. 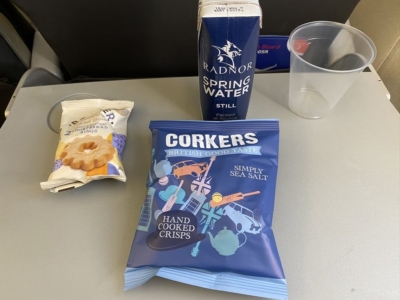 It is worth remembering that BA CityFlyer has NEVER introduced ‘buy on board’ catering.  The current service is little different to what went before, unlike on British Airways flights from Heathrow where the return of free snacks is a novelty.

Whilst the meal service is pretty basic, it does allow you the excuse to remove your mask. What freedom! After wearing a mask for almost 2.5 hours being able to take it off felt like an indulgence! Whilst masks are obviously a necessary part of travel at the moment, I can’t wait for the moment when we’ll be able to travel without one. For now, my advice is to pack one you are comfortable wearing for long periods on your journey.

Beyond this, the rest of the flight was just as you would expect.  Cabin crew encouraged us not to queue for the toilets in the aisle, and disembarkation was processed in rows, which avoided the usual mad rush of people trying to get their luggage out of the overhead bins. 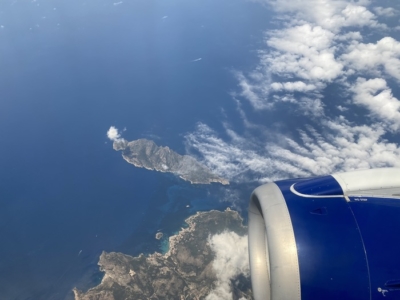 All things considered, flying isn’t ‘normal’ at the moment but it certainly isn’t as strange as I thought it might be. The biggest change is the requirement to wear masks – beyond that, aircraft continue to take-off and land in the same manner as ever before, albeit at far reduced rates (for now….)

In the next few weeks BA CityFlyer will add more destinations from London City Airport.  The current schedule for July, subject to change, is:

Thanks to London City Airport and BA CityFlyer for inviting us.

Next up: tales from Ibiza …… 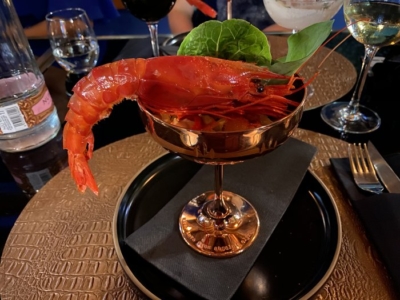