This is our review of the new Middleton Lounge at Teesside International Airport (formerly Durham Tees Valley Airport).

It is one of two lounges, the second of which is yet to open, which will replace the previous SKYLIFE Lounge.  This was, itself, a short-lived replacement for the Premium Lounge.

This article is part of our series of reviews of airport lounges across the UK.  You can see all of the reviews here. 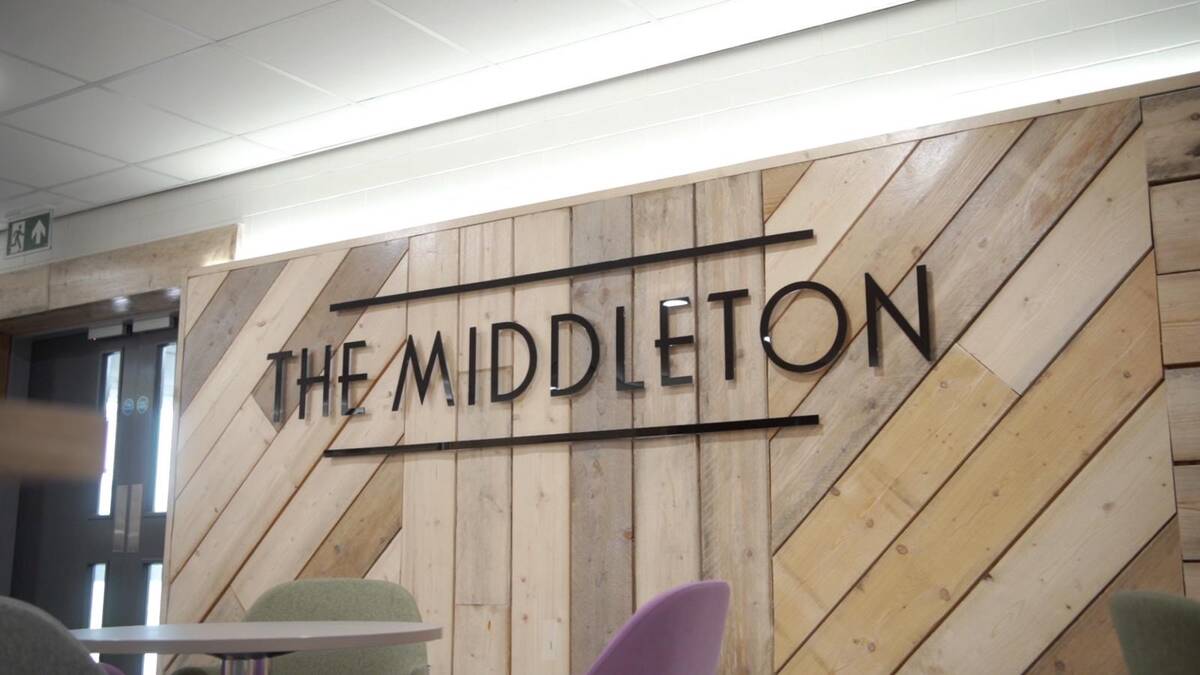 Reader Michael visited the Middleton lounge recently and sent us this review.  Over to Michael:

“Since the last Head for Points lounge review of Teesside International Airport nearly 2 years ago, a lot has changed.

The mayor of Tees Valley based his first campaign on buying the airport and making a success of it once again after years of neglect.  After his win he did just that, funding a massive refurbishment of the airport and landing multiple new routes.

The airport now has two new lounges which replace the old SKYLIFE lounge.   The Rockliffe Lounge which will be ‘adult only’ when it opens.  The Middleton Lounge, which I am reviewing here, is open to all.

We arrived around 16.30 for our 18.45 flight down to London Heathrow with Loganair. We were the only people in the lounge for the whole duration despite three other flights on the departure board to Humberside, Aberdeen and Alicante. 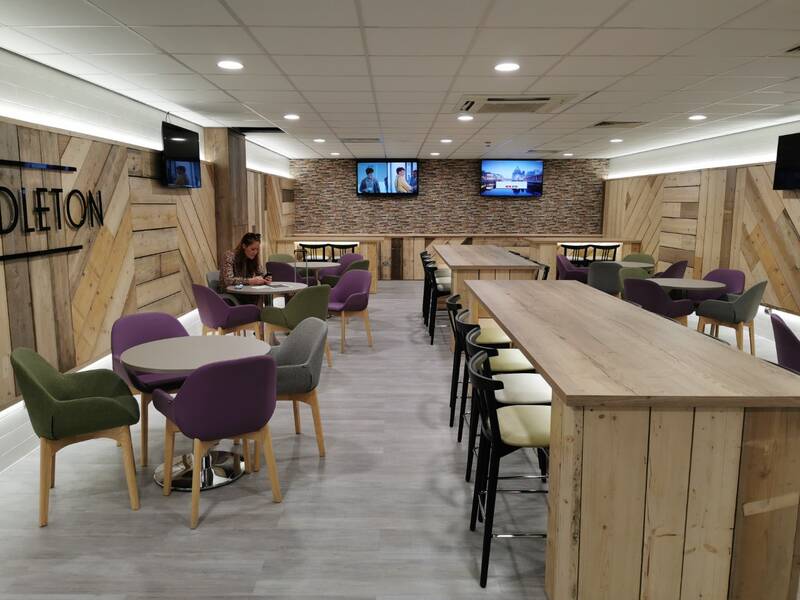 The lounge opening times stated on the airport’s website are 04.00 – 18.30.  After speaking to a member of staff who assumed we were on a later 19.40 flight she told me that they would remain open until the last flight of the day had left.

We were escorted to our seats.  The member of staff put the TV with a music playlist on for us, told us to help ourselves to drinks and gave us a menu and asked if we would like any food.

We both ordered the chicken tikka masala and a side of cheese, onion and bacon loaded fries. It seemed there was only one kitchen at the airport so the food came from elsewhere outside the lounge – nevertheless it was hot and tasted delicious.

The lounge is away from any windows and has no natural light, but with plenty of lighting and a light colour scheme it never felt dark and uncomfortable.  There are plenty of sockets with USBs on a mix of high stooled tables and lower table and chairs.

Toilets were a short walk outside of the lounge – this is only a small airport and nothing is too far away. 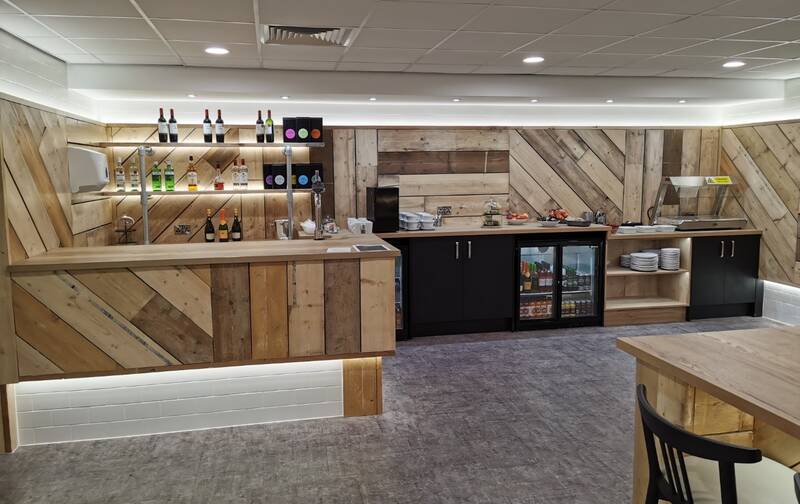 A good selection of drinks were on offer red, white and rose wines, bucks fizz and prosecco as well as three types of largers, beer and soft drinks. Spirits were Barcadi rum, Bells whisky, Gordons gin and Smirnoff vodka.  There was also a selection of pre packages cakes above the drinks cabinet.

No newspaper or magazines were on offer when we visited but this may be a covid measure which changes in the future.

There was a screen showing departures when we arrived but this was later turned off.

We were truly left to ourselves!  The staff member stayed on the desk outside and occasionally popping in to clear the table and checking we were okay.

We were extremely satisfied with our experience in this modern and spacious lounge, especially the high quality and wide range of food.

With some new shops at the airport including a small duty free, flawless entry to departures through security (with a new scanner so liquids don’t need to be removed from baggage) and no queues we wouldn’t hesitate to come back.   Choosing Teesside over other local airports is now made even easier with the Loganair BA codesharing now in place.” 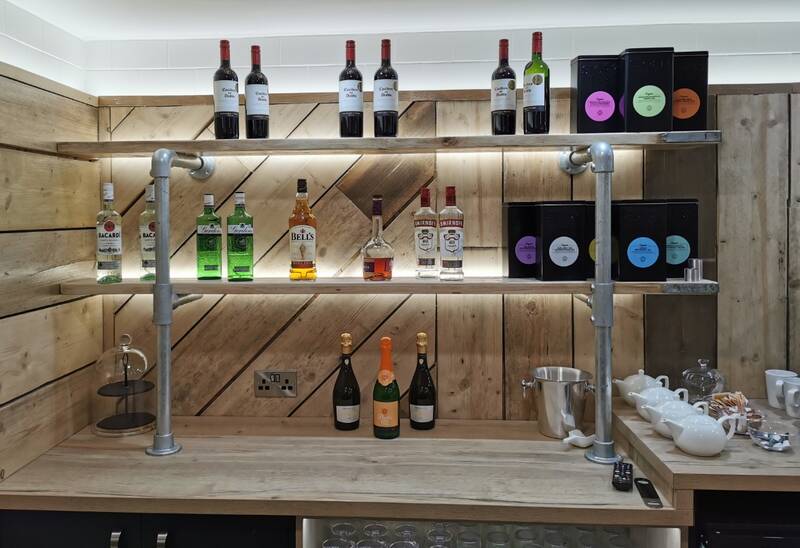 How to enter the Middleton Lounge at Teesside International Airport

Whilst the current situation may be different, historically KLM has used the lounge at Teesside International Airport for its business passengers as well as those with Gold or Platinum Flying Blue status. Eligible guests from Eastern Airways can also use the lounge.

You can read more about the Middleton Lounge on the airport website here and also book entry for cash, currently £25.