A couple of weeks ago I abandoned my wife and children and headed down to the Cote d’Azur with a friend for a night.  (And why not?!)

This is not a trip report post, but I do want to flag up what I learned about the hotel options.

We both stayed at the InterContinental Carlton in Cannes which is directly on La Croissette, the road facing the beach and where all of the ‘grand’ hotels in Cannes sit.  A quick look at the rates for cash (Euro 580, room only, for the cheapest room – welcome to August in the south of France) made it clear that this was going to be a great time to use 50,000 Priority Club points from my stash!

What was fascinating was the way that the hotel classifies its rooms.  Most hotels put their smallest rooms in the bottom category and work up from there.  The Carlton does not do that.  It assumes that its guests want a sea-view above everything, irrespective of room size.  This is reflected in the room rates, where the premium between a sea-view and non-sea view room is about 50%.

My Royal Ambassador friend was upgraded to a 30 sq m ‘deluxe’ sea view room.  This was, at best, average sized but did have a perfect view over the sea.  It also gave him a perfect position at 2am to listen to people racing their Lamborghini’s up and down La Croisette.

Me, just a lowly Ambassador, received a 40 sq m ‘executive’ city view room.  I have posted a photo below which (rare for this blog!) is one I actually took myself (all the other photos in this post are stock photos).  You can see how spacious it is.  Frankly, I couldn’t have cared less about not having a sea view, given that we were out all day and, indeed, had been staring at the sea all day anyway! 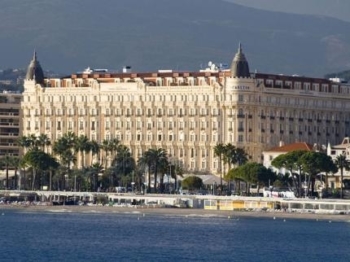 The Carlton is in serious need of a refurbishment, and will be closing from September 2013 to early 2015 for a monster renovation and extension.  As well as totally rejuvenating the original hotel, it will see the addition of 80 new rooms, 70 apartments, a conference centre and an outdoor pool in a space behind the hotel which is currently a car park.

I usually try to avoid hotels in need of refurbishment, for obvious reasons.  However, I really loved the Carlton.   As befits its age, it has amazingly wide corridors and a number of lovely spiral staircases running through it.  My room, whilst clearly old in places, was well decorated, very well maintained, had a modern TV and was a very good size.

The Carlton also has huge public areas, where you can sit around and watch the world go by (in particular, watching bikini-clad guests go by!).  I was also impressed to find that wi-fi was free in the bar and lobby, and was free for 30 minutes in the room.  The few downsides were their refusal to honour my friends Royal Ambassador free mini-bar benefit as it was a reward stay (which they can technically do, although many hotels still allow it) and the Euro 39 cost of breakfast.  The Lux cafe around the corner offered coffee, orange juice, 2 excellent croissants, butter and jam for Euro 7, so that was where we headed!

If you don’t have any Priority Club points, there are two other options for redemptions.  The JW Marriott is a rather scary 1970’s building near the InterContinental which I did not go in and cannot comment on.  Where we DID go, though, was the Radisson Blu 1835 Hotel and Spa.

The Radisson sits apart from the other Cannes luxury hotels, on a corner spot near the harbour.  This gives it water views in two directions and, perhaps importantly, it is directly opposite the main public beach in Cannes.  The beach opposite the IC and the other Croisette hotels is mainly private and dominated by sun loungers, with little space to yourself.

The Radisson has clearly had a massive refurbishment in the last couple of years.  The interior decoration is very modern and very attractive – don’t be fooled by the ugly exterior.  It also has a fantastic rooftop restaurant and bar where we spent a couple of very pleasant hours in the afternoon, and where it seems they have a DJ in the evenings.  If the Carlton looks too formal for you, I would recommend blowing 50,000 Club Carlson points here.

Whilst we didn’t go in a bedroom, the photos look good.  Be wary of the size, though – at 17 sq metres, they are going to be very cosy indeed.  However, if you’re going to spend your time at the rooftop bar then that won’t be a problem. 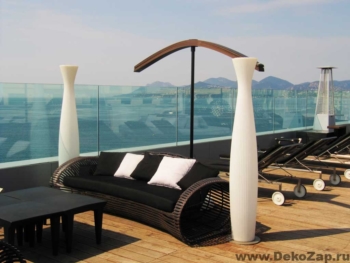