This is my review of the InterContinental Boston hotel.

It is 25 years since I first came to Boston. If you’ve never been to the US, it is a good first place to visit. It feels very British, being the oldest US city, and has a British-style layout (no city block layout here). There is also a large student population from Harvard and MIT as well as two world class museums in the Museum of Fine Arts and the Isabella Stewart Gardener museum.

My various stays here over 25 years took in all stages of the ‘Big Dig‘. The last time I was here, the new tunnels were open but the old expressway had yet to be pulled down. The InterContinental would not exist without the ‘Big Dig’ – no-one would build such a hotel overlooking a noisy elevated road. Today, 95% of the $25 taxi ride from Logan Airport to the hotel takes place in tunnels!

The InterContinental Boston sits on the harbour, with parkland in front where the elevated highway used to run. It is marginally out of the way, on the edge of the Financial District, but Boston is small and walkable. You are unlikely to regret staying here on grounds of location. Whilst Boston Common is 12-15 minutes walk, Quincy Market (the Covent Garden of Boston) is very close, as is the Aquarium.  Library photo of the hotel below: 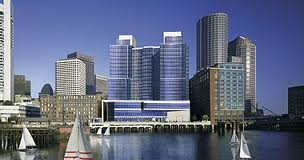 I booked a room using IHG Rewards Club points at 45,000 per night.  I am an Ambassador member (I wrote about Ambassador here) which gives you a guaranteed upgrade on paid stays.  Most IC’s also respect this on reward stays – New York also upgraded me, as you will see in a few days.

My standard room in Boston was – I was delighted to find – upgraded to this beautiful junior suite-sized corner room overlooking the water: 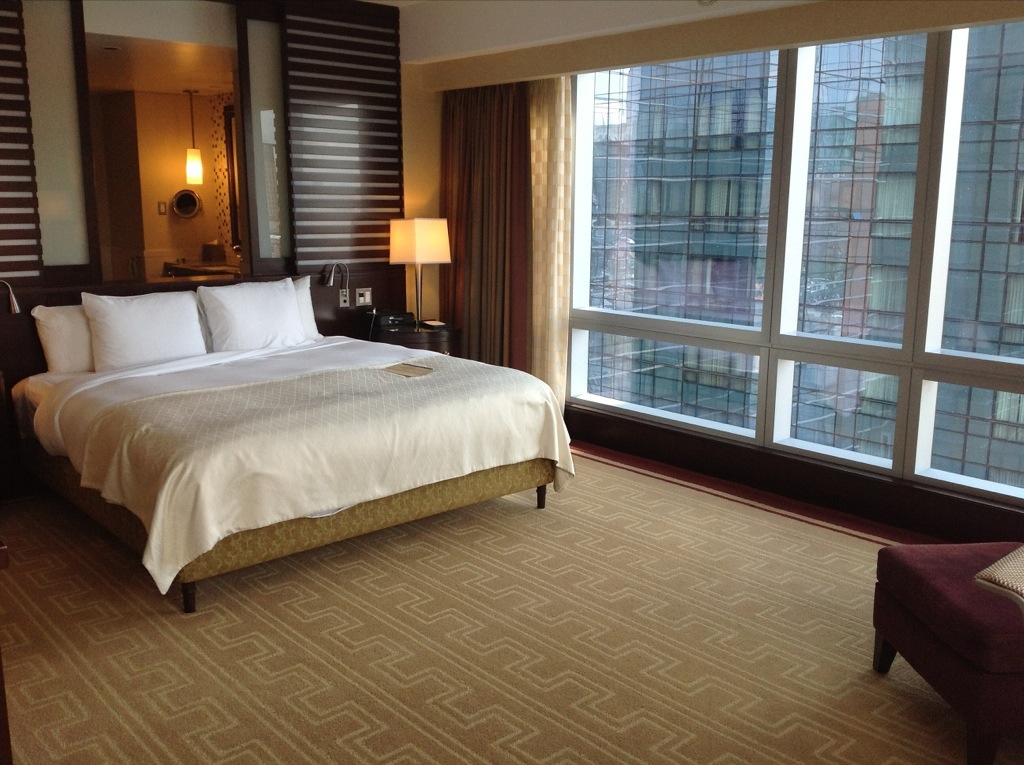 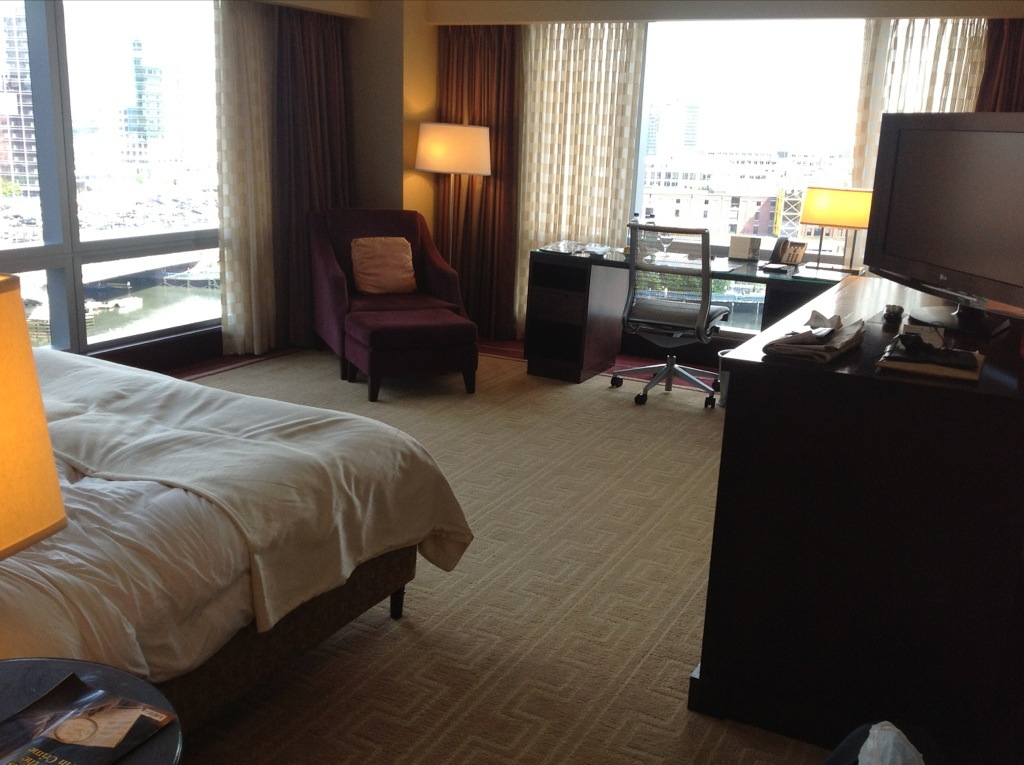 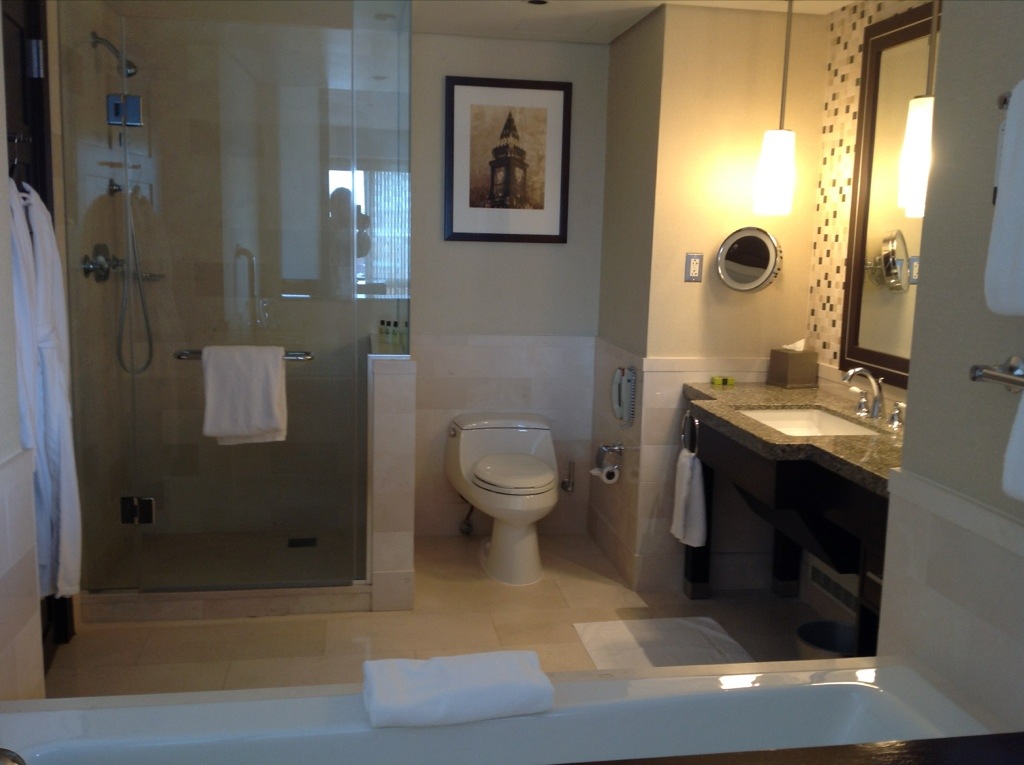 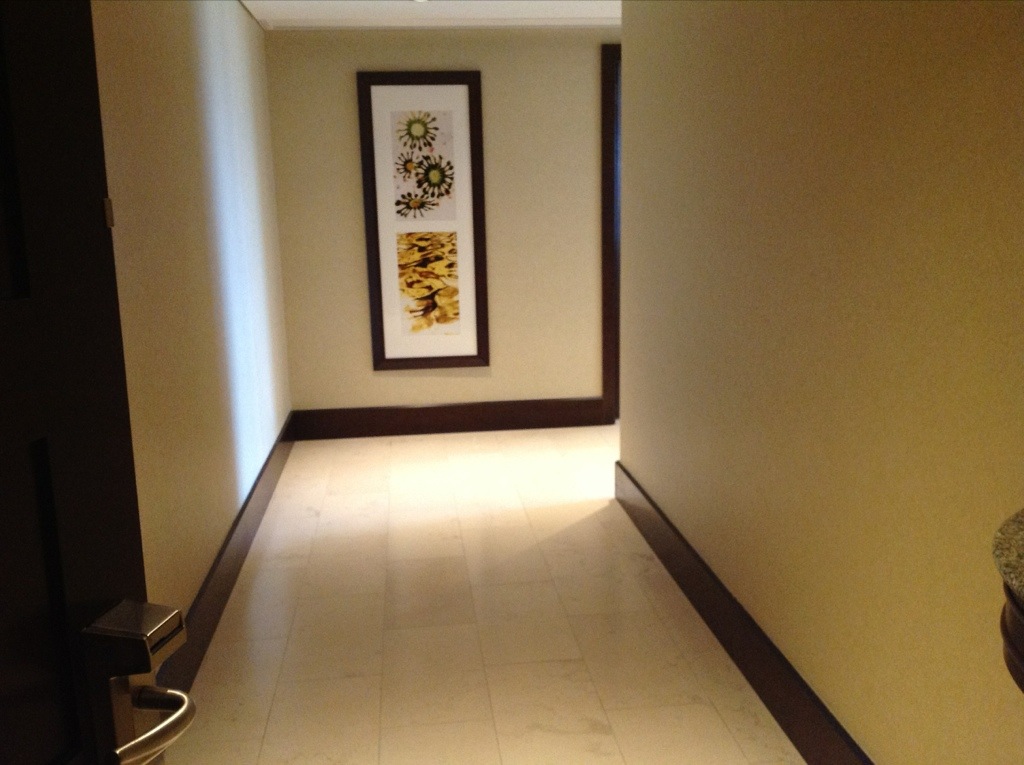 Nice, isn’t it?! In particular, the bathroom was huge, with a full sized bath and a separate shower. As you can see, there was huge amounts of space in the room. I also received the usual Ambassador free mineral water and free fruit plate.

I also received free internet as an Elite IHG Rewards Club member, and this was NOT a slowed down version. (IC Dusseldorf restricts you to 512MB download speed.) I could stream video on my ipad with no problems.

What I also liked about the hotel was that it has a large lobby, with a lot of public space. Too many new hotels are cutting back on lobby space, in my view – the IC has plenty of space to circulate.   Here is a stock photo of the lobby: 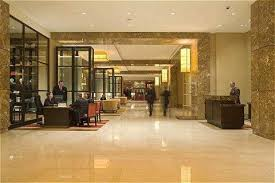 I had a good couple of days at the InterContinental Boston and even the time spent in the hotel was a pleasure when you have such a large space and such great views.  I never ate in the hotel restaurant, so unfortunately I can’t offer a view on the food.  Even if the hotel is not to your taste, though, there are plenty of other options on the harbourside.

After two nights, though, it was time to head back to Logan Airport for something I can’t remember ever doing before – taking an American Airlines domestic flight!

You can find out more about the InterContinental Boston, and book, on the IHG website here.