There are a number of good reasons NOT to start your long-haul premium cabin British Airways flight in the UK!

The first is Air Passenger Duty, levied by the UK Government.  This is now getting pretty steep – a business class flight to Thailand would cost £166 for example.

You can avoid this by flying outside the UK, flying back and then leaving the UK on your longhaul flight within 24 hours.  (The longhaul flight must be on the same ticket as your Europe to UK flight.)

If you live in the South East it is pretty easy – the day before your holiday, you quickly fly to somewhere in Europe or the Channel Islands, fly back, go home and then next day head off to Heathrow as normal.

For cash flights, the savings are even higher than for redemption flights.  On an Avios ticket, all you save is the Air Passenger Duty – and that is offset by the cost of the Europe flight.

Cash flights come with a double benefit, though.  British Airways prices flights which start in Europe far lower than those which start in the UK, because it needs to win over passengers from local carriers.

Whilst this is obviously an extreme example, it works on more mundane routings too.  It is especially interesting when BA has an ex-Europe sale.

Doing a back-to-back connection is not always straightforward, though.

You want to come back on the same plane you arrived on, to ensure you get back OK.  (The next flight could be cancelled, delayed etc.)

You need to use an airport where you are not forced into a lengthy customs and passport control check in order to get back to the plane.  If you arrive late, you could fail to get back to the boarding gate in time, especially if the airport stops you going through security if the plane is near its departure time.

You want to use an airport where you will NOT be bussed to and from the plane.  Adding in a bus increases the risk of not getting back on the plane, because the bus boarding area may be closed before you have a chance to get to it.

Amsterdam has a reputation for being a great airport for a back-to-back flight.  However, I had never done this myself at Schiphol.  As Amsterdam was available for £1 in the recent Reward Flight Saver sale, I booked myself a return flight, coming back on the same plane, to test it out.

It was astonishingly easy.  So easy, in fact, that it is almost too boring to write about!

You land at a D gate like this one.  As you can see, you exit directly into the boarding area.  You simply walk off the plane, sit in the boarding area (there is a café whilst you wait) and then reboard.  100% trouble free.

The only thing to remember is to have your return boarding pass with you, as there are no boarding pass machines at the gate.  Even if they were, they would probably refuse to issue your boarding pass so close to departure. 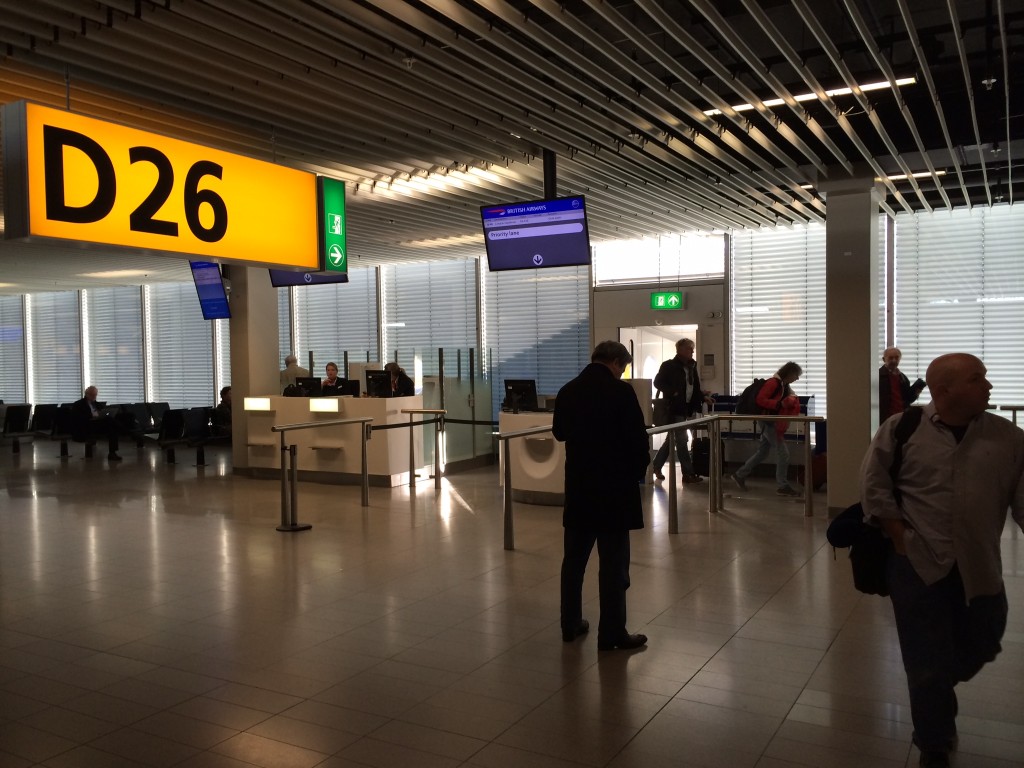 The security gates, as you can see below, are behind you.  There is therefore no reason to clear security again. 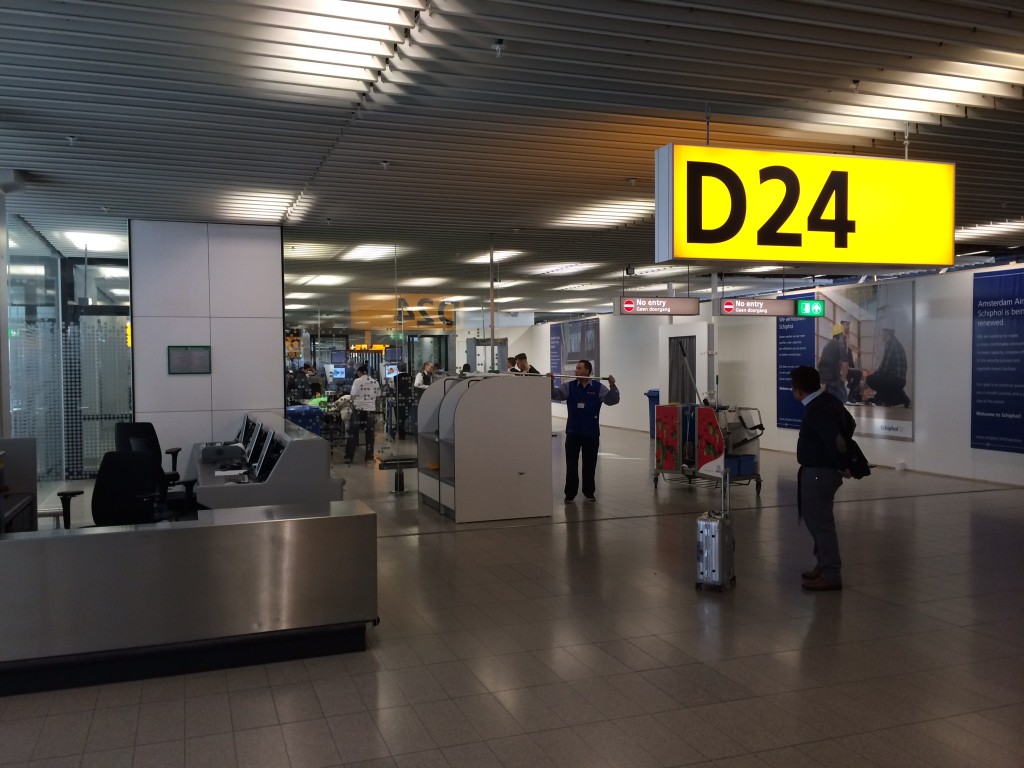 The only downside is that you cannot access the British Airways lounge.  It is quite a walk from the gate and would require you to reclear security.  That defeats the object of doing a risk-free turnaround.

It is worth noting from the Flyertalk thread how good Amsterdam is.  At Brussels, for instance, it recommends you give yourself 30 minutes from leaving the plane to getting back to the boarding gate, which may be too tight.

If you do book a flight Amsterdam – London – XXXXXX – London – Amsterdam, here is one vital tip.  Book the last leg of your flight (London to Amsterdam) from Gatwick.

I am assuming that you will not want to take that last flight.  If you book it to depart from Gatwick, it is impossible for your luggage to be checked through and it must be returned to you at Heathrow – which is exactly what you want!