British Airways is moving into ‘slow TV’ according to an announcement on Monday.

Impressed by the high viewing figures for the ‘moving map’, the airline has bought the rights to a seven hour TV programme filmed from a Norwegian cross-country train travelling from Bergen to Oslo.  It is a commentary-free seven hours of moving Norwegian countryside which was a surprising success when shown on Norwegian TV. 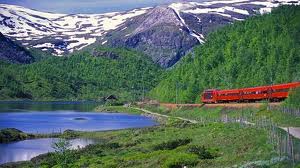 If the video proves popular, BA may commission further films on knitting, walking in parks or bird feeding – apparently.

“It fits perfectly with the wallpaper-style footage people find mesmerising,” BA on-board entertainment manager Richard D’Cruze said after securing the first airline rights to the rail film. “There’s a hypnotic, calming and entertaining quality to Slow TV that is perfect for in-flight entertainment.”