After a 14 year gap, British Airways announced yesterday that it is resuming flights to Kuala Lumpur.

The service will begin on May 27th 2015.  It will be operated by a four class Boeing 777 which will include First Class.  BA has stated that it intends to prioritise the route for a Boeing 787 aircraft later in 2015.

The flight times are both overnight.  The outbound will depart at 20.15, arriving at 16.00 the following day.  The plane will then sit on the ground for seven hours (an expensive option when dealing with $200m aircraft) to depart at 23.05.  It lands back in London at 05.25.

Given that Malaysia Airlines joined the oneworld alliance last year, this is a slightly surprising move.  Malaysia Airlines is operating TWO A380’s from London to Kuala Lumpur each day, each of which will have substantially more capacity than a 777, and which features Malaysia’s latest seating.  You can earn Avios and British Airways Executive Club tier points on either service.

Let’s look at the redemption opportunities.

Here is a screenshot looking for 2 Club World seats: 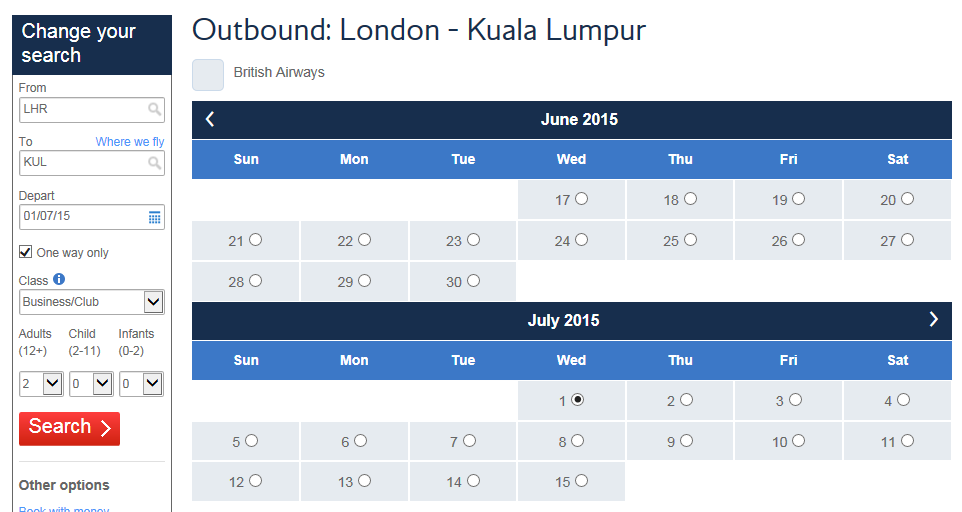 As you can see, there are two seats every day for this period.  In fact, from what I could see there are – in general – seats in EVERY class on EVERY day at the moment.  Club World tends to have 4 seats available, First Class has two.

Kuala Lumpur is, of course, very close to Singapore and it is easy to connect between the two by numerous modes of transport.  This offers an additional opportunity for anyone looking to connect to the British Airways Singapore to Sydney service down to Australia.

(What I don’t know is if you could use a BA Amex 2-4-1 voucher to fly London-Kuala Lumpur and then Singapore-Sydney.  My gut feeling is no.)

Malaysia Airlines also runs a number of routes to Australia and New Zealand from Kuala Lumpur.  These include (subject to change at the moment) Adelaide, Brisbane, Darwin, Melbourne, Perth, Sydney and Auckland.  You could therefore use your 2-4-1 voucher to fly to Kuala Lumpur on British Airways and then book a second Avios redemption, at full price, for a connection on Malaysia.

If you are simply looking to fly to Kuala Lumpur and do NOT have a 2-4-1 voucher, I would give British Airways a miss.  The taxes on a Club World return ticket from London to KL will be £558 plus 140,000 Avios.

If you take the Malaysian Airlines service (on an A380 remember, with flat beds) in business class, from Heathrow, you will pay just £442 in tax – saving £116.

For an even bigger saving, head over to Amsterdam or Frankfurt or Paris (Paris is an A380 city).

Note that some of these routes are at risk in the current Malaysia Airlines restructuring, now that the airline has been renationalised.  You may, though, come out on top if that happens as you may be able to get rerouted from London without needing to pay additional taxes or Avios!