Over a four week period recently I flew Qatar Airways, Emirates and British Airways in business class on a flight which included a main meal.

I thought it would be a bit of fun to compare the three meals.  Did British Airways have the best business class food or not?

(You cannot use this exercise to draw serious conclusions about the food quality on any of the airlines, especially as my food choices are biased towards fish and poultry.  Certain themes do seem to come through though.)

This is a clear win for Qatar Airways as neither Emirates or British Airways served one.  Here is the Qatar Airways amuse bouche of Indian spiced lobster: 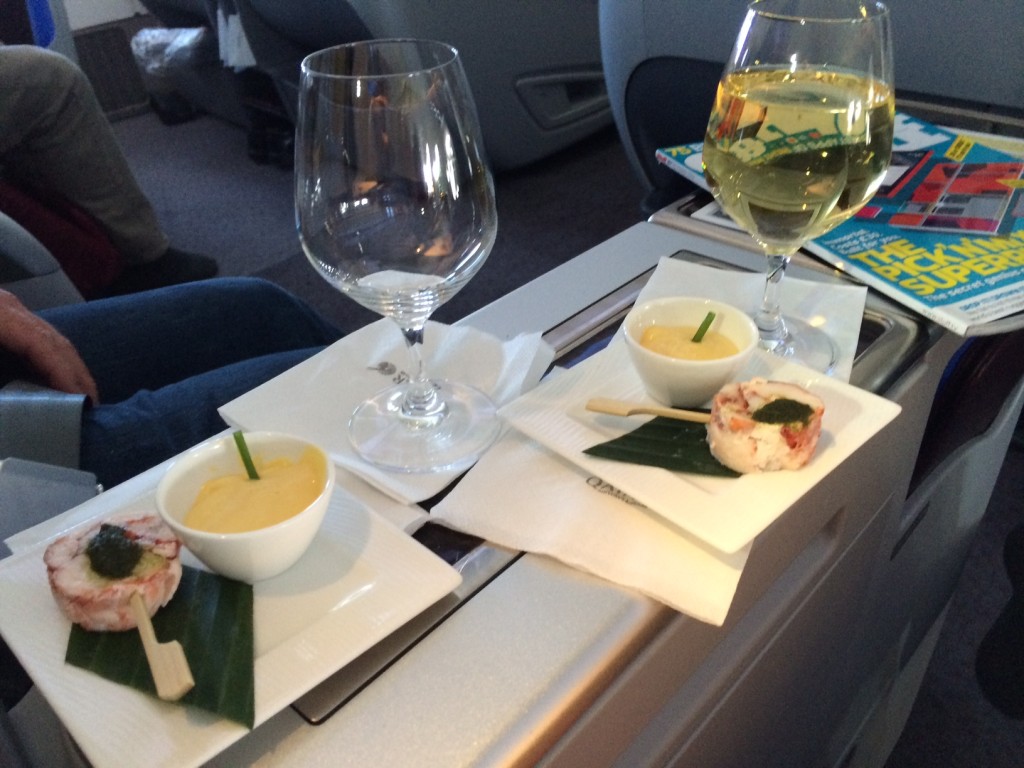 Qatar Airways served up a smoked chicken terrine with pear chutney (2 other options): 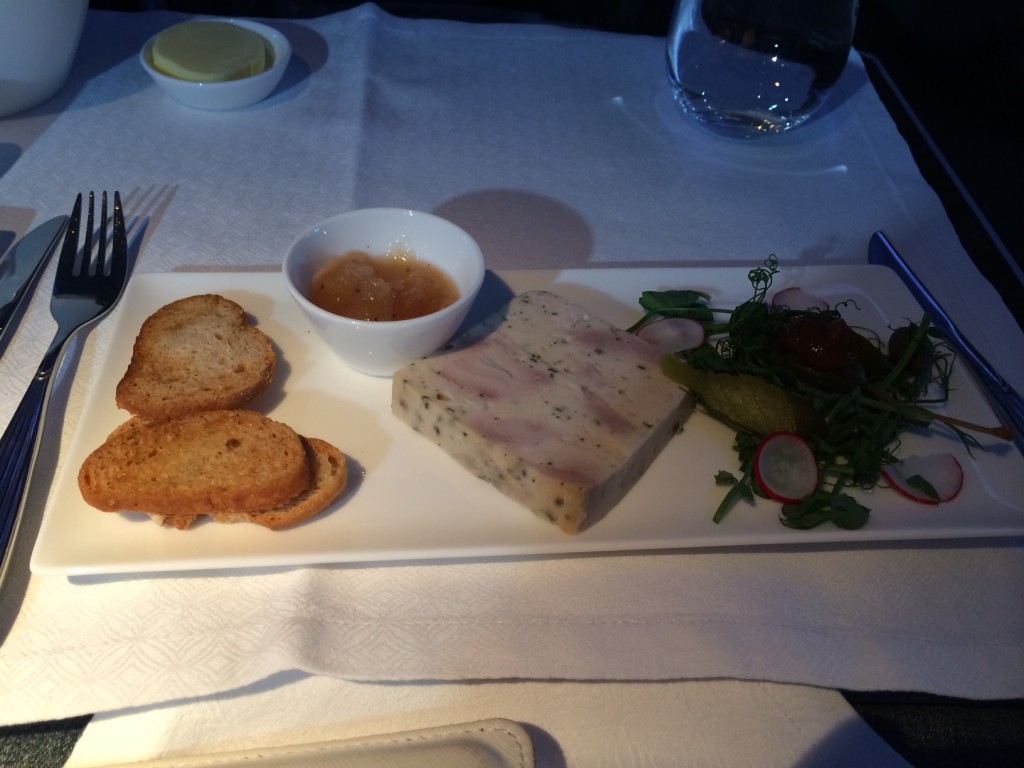 British Airways offered me a bocconcini mozzarella and slow-roasted cherry tomatoes with basil dressing (1 other option).  It was served as pictured, ie tipped to one side of the plate! 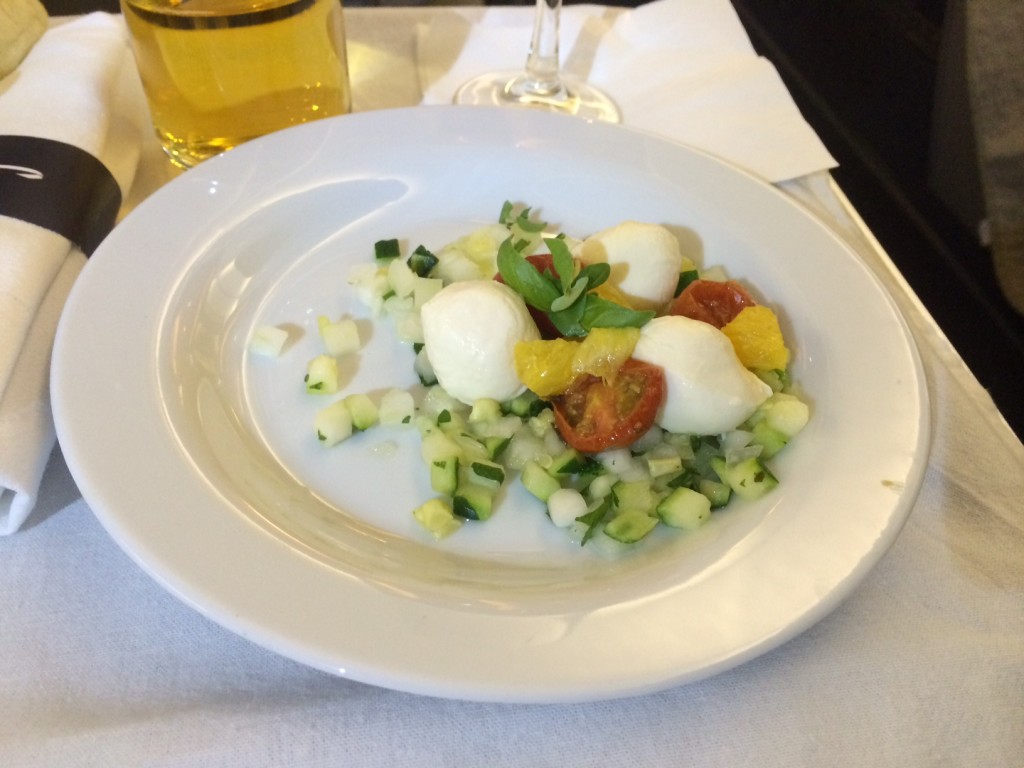 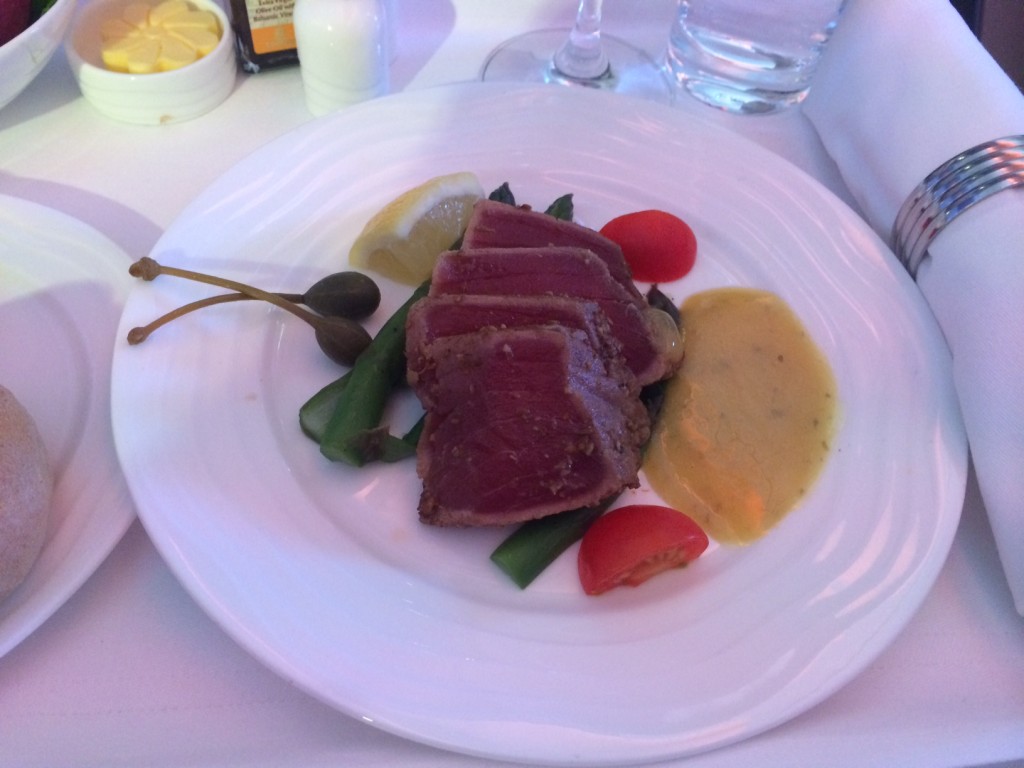 I judged Emirates as the winner of this round and I think the photos back me up.

As I wrote in my original trip report “the mild spiciness of the monkfish overcame the dulling sensation that your taste buds experience in flight to ensure that the food did still deliver a kick.  It also came with a selection of bread which did actually taste and feel like bread”. 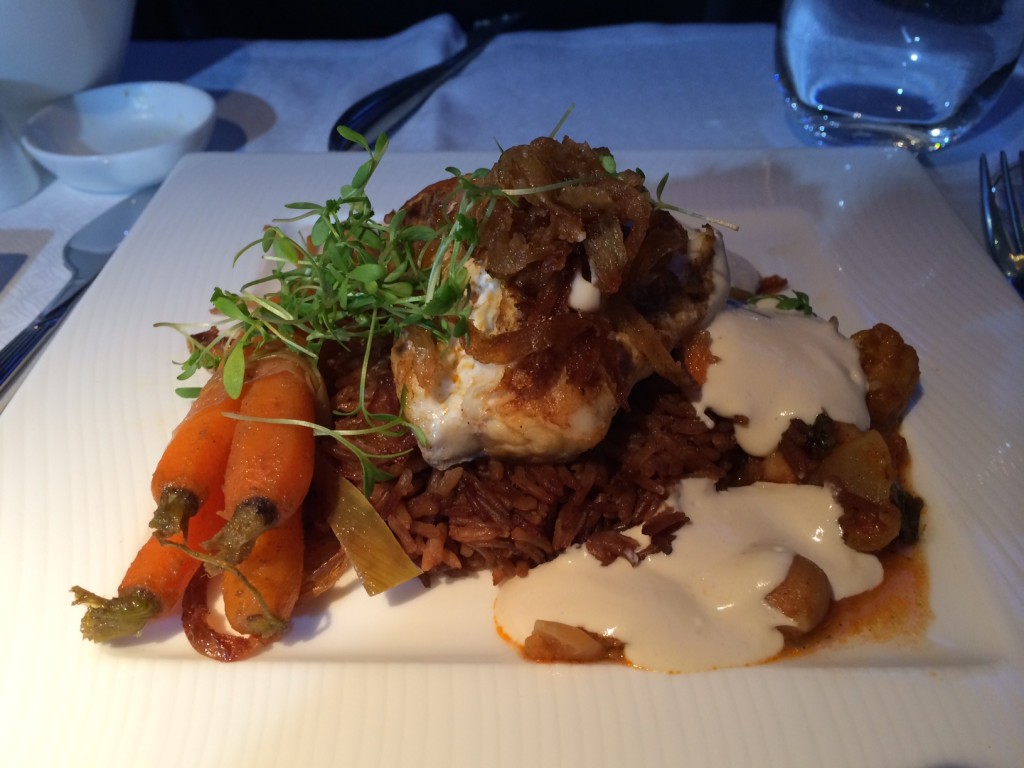 BA’s Club World had a broader range with four options.  I went with North Atlantic cod with a saffron and sultana sauce, vegetable tagine and couscous.  Yet again, presentation lets BA down in a big way: 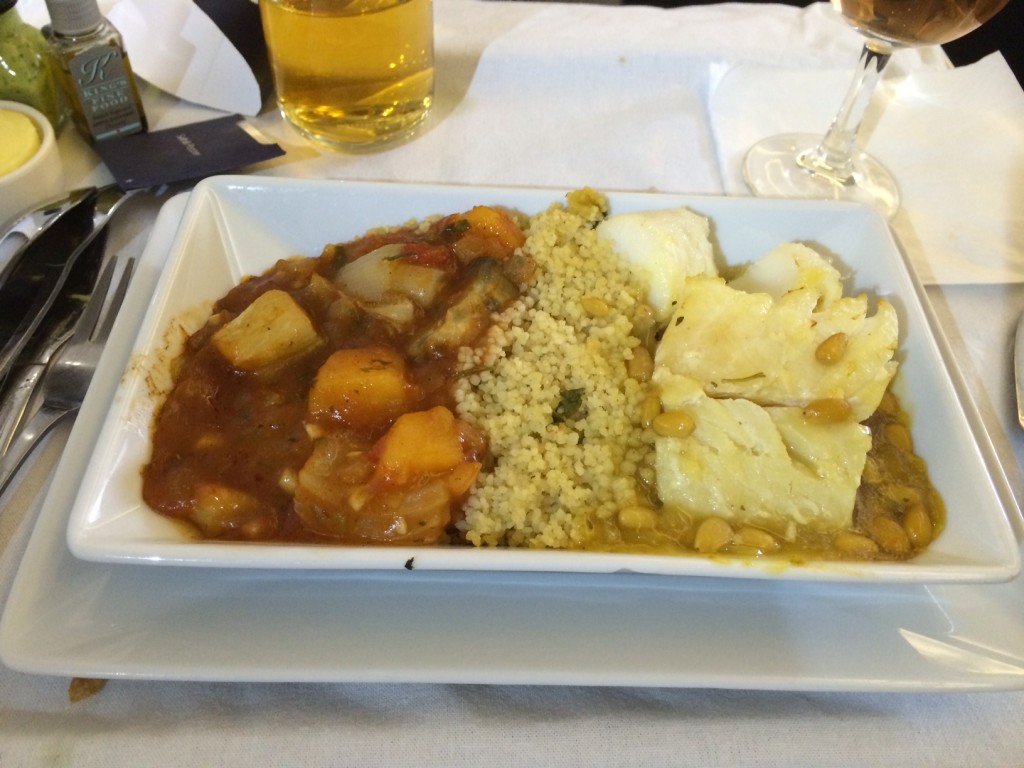 Emirates also had four options.  I went with roast chicken dressed with chicken jus lie, served with red pepper, courgette, yellow squash and oregano potatoes.  It wasn’t bad but Qatar had an edge. 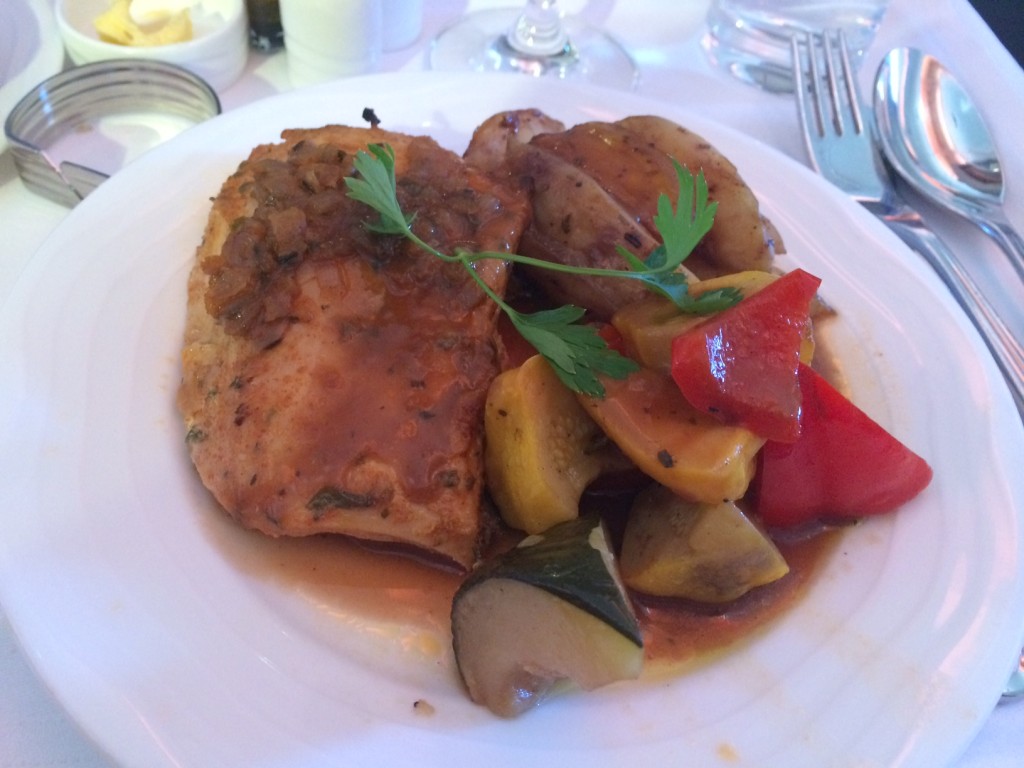 To be honest, none of the three airlines really went for it here. In general there was just one ‘proper’ option plus fruit, ice cream, cheese etc.

Qatar Airways came up with cardamom panna cotta with rhubarb compote (two other options of fruit and ice cream): 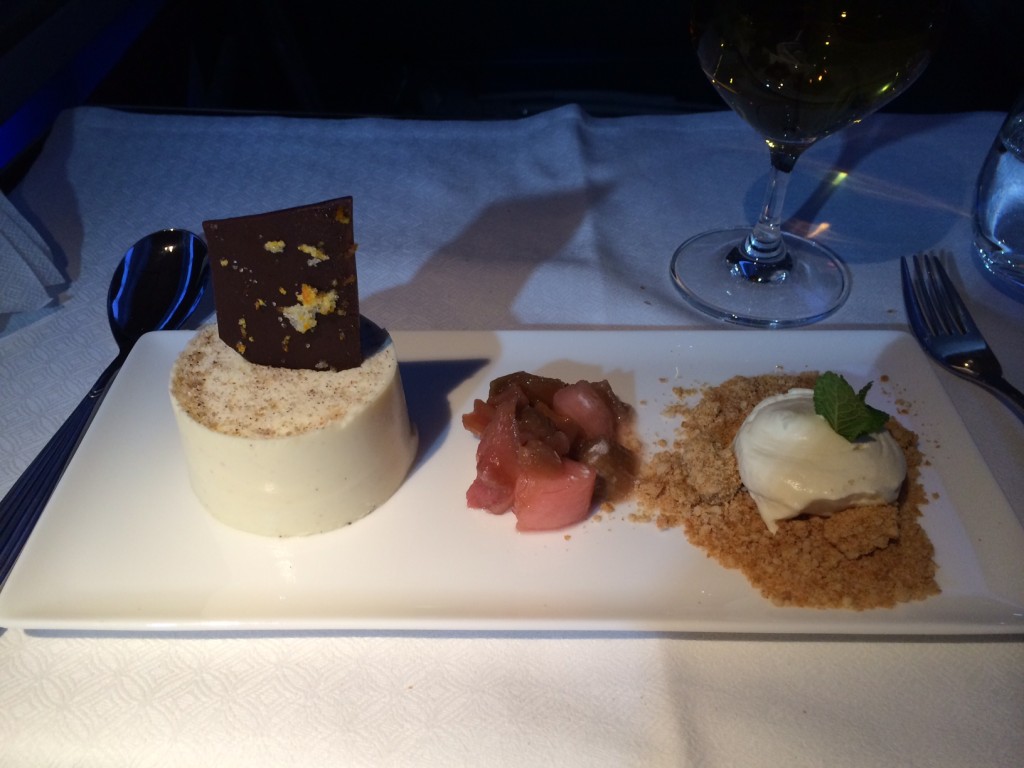 British Airways had four options – cheese, fruit, ice cream and the chocolate and orange Mogador with orange sauce which is what I went with: 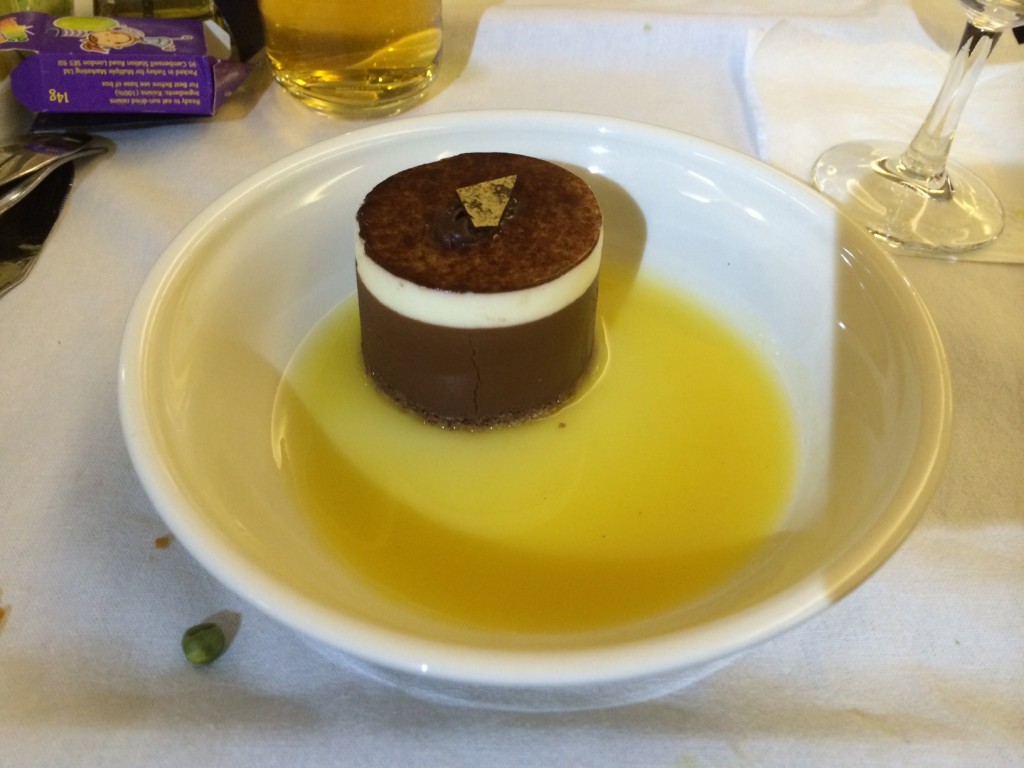 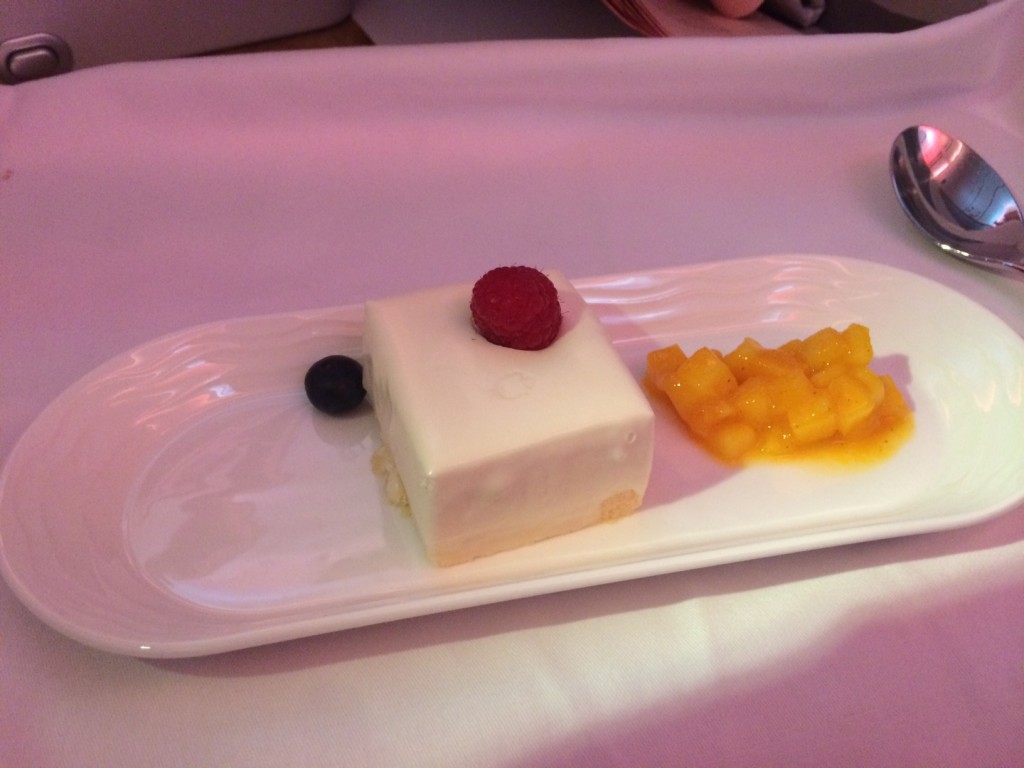 I am going to judge this round a tie.  The Qatar dessert had more ‘going on’ and was technically the most accomplished but the BA Club World option had a satisfying bite from the orange sauce.

Based purely on the three meals above, I will give Qatar Airways the prize for ‘best meal’.  There was not a dull note anywhere.  Emirates comes in 2nd place.

British Airways is third, let down by poor presentation and, frankly, clear evidence that less money has been spent and ‘easy options’ (in terms of ability to serve) taken.  Take a look at the carrots in that Qatar main course – you are never going to see that on British Airways, even in First Class.