The Avios earning and burning changes, which kick in from April 28th and are covered in a series of articles starting here, are beginning to impact other carriers.

As a reminder, this is what is happening with Avios: 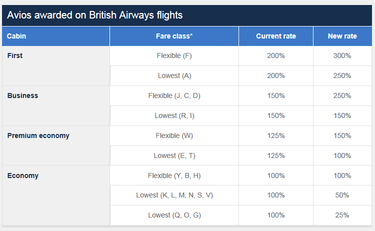 Virgin Atlantic currently beats British Airways by offering a 200% cabin bonus for flexible Upper Class tickets.  To ensure that they continue to beat BA, the cabin bonus has increased to 300% with immediate effect.

Between now and April 28th – ignoring the impact of any status bonus – you will earn twice as many miles on a flexible business class ticket with Virgin Atlantic compared to British Airways.  After April 28th, you will earn 20% more.

The 300% bonus is flagged as a special promotion until the end of 2015 but may well remain permanent.

It is worth noting that Virgin Atlantic continues to give 100% of miles flown on ALL economy tickets.  This is a SUBSTANTIAL difference to what you will earn on a cheap economy ticket on BA after April 28th – a modest 400% difference!  If this continues, it will be a very good reason to fly Virgin.

You can see the new Virgin earning table on their website here.

Meanwhile, Qatar Airways has taken the axe to the miles you earn when you credit some BA flights to their Privilege Club.

This is an important move.  If other oneworld airlines continue to credit British Airways flights at the current rates, it will make more sense for some people to start crediting BA flights to another airline.  This will be especially true of travellers who always travel in discounted economy. 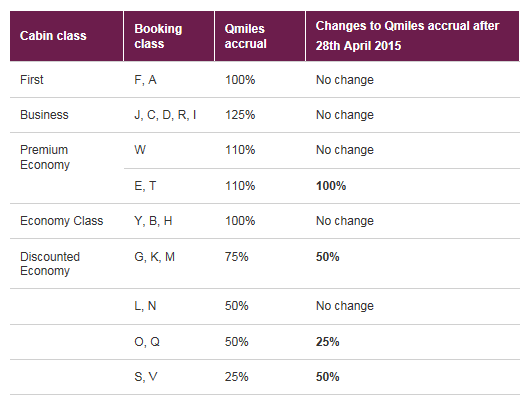 None of the rates are more generous than British Airways Executive Club except economy class G which earns 50% in Qatar but only 25% on BA.  Given that there are nine economy ticket buckets this is not a major difference.

We can expect similar changes from other oneworld partners in the next few weeks, I expect.  It is hard to believe that American Airlines will continue to give you 100% of miles flown in BA discount economy when BA only gives 25% ….