This is my review of the British Airways Galleries Club lounge in Heathrow Terminal 3.

I flew to Helsinki last week to test drive the new Airbus A350.  As Finnair fly from Heathrow Terminal 3, I had five lounge options:

I decided to visit them all!  Having started off with the two third-party lounges (No 1 Lounge – outstanding, Swissport – dreadful) I moved on to the oneworld options.

It is probably 3-4 years since I was last in the British Airways lounge in Terminal 3.  I am not even sure that I have used it since it was refurbished in the Galleries style.

This review only covers Galleries Club – I did not visit any of the First Class lounges available (this would be an 8 part series if I had!).  I also had no time to visit the Elemis Spa in the lounge – and it is very unlikely I would have been able to get an appointment anyway.

In general, I am positive about the Galleries lounges at Heathrow T5.  Many people dislike them, but I like the fantastic natural light, the views and the modern decor (which was originally quite a punt for BA I think).

Terminal 3 is more of the same, but less so.  The room has a low ceiling and there is only natural light in a small part of the space.  This saps a lot of the ambiance.

You will recognise many of the features from Terminal 5.  There is the wine ‘trough’ (no champagne in Club, potentially on request though) at the far end: 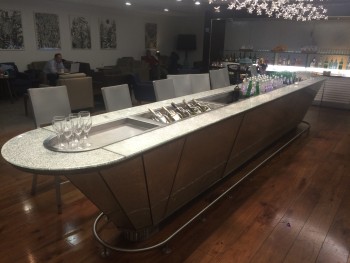 The decor here is excellent – you can just see an impressive lighting fixture at the top of the image.

As you walk back towards the entrance, you pass another drinks area: 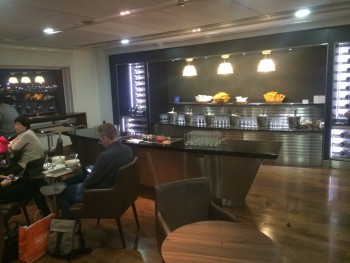 Whilst big, the scale of the lounge is broken down into manageable areas by the use of different types of seating and the bars.  This area does have an external view from one side although it was dark when I was there: 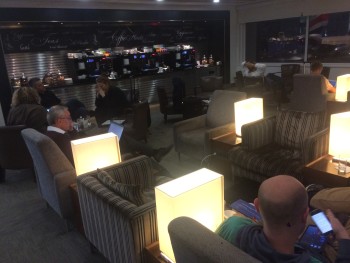 Opposite is a huge business centre – possible too large given the move to tablet and smartphone working in the last few years: 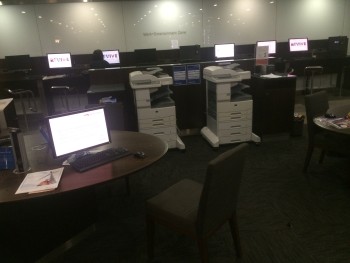 Now we hit trouble.  Here was the food offering at 5pm – nothing on this side: 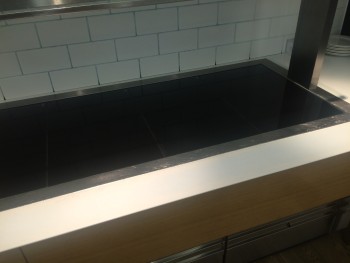 and, on the other side, a handful of truly pathetic sandwiches (made as thin as humanly possible to save on bread costs) plus an OK Victoria sponge, albeit made with very cheap jam: 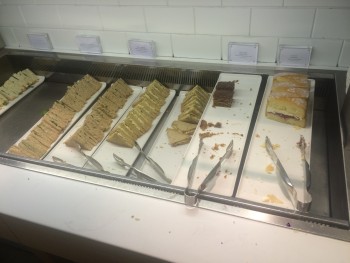 Why don’t airlines (and BA is not the only culprit) ‘get’ lounge food?  If you are in an airport, the normal rules of eating do not apply!

A large percentage of the guests will be in transit and are not operating on UK time.  An even larger percentage in the Galleries lounge will be about to board an economy short-haul BA flight which essentially has no food on offer.  Perhaps they would like to eat something half-decent?

Upstairs, in No 1 Traveller, there was – an hour earlier at 4pm, so even more ‘off peak’ – a full hot and cold buffet available plus a wide range of ‘cooked to order’ dishes, the first of which is free (£4 thereafter).  The best that British Airways can offer is shown above, plus some soup which I didn’t photograph.

We also need to talk about magazines.  BA now appears to sees magazine provision in its lounges as a profit centre.  With one exception, all of the other magazines you can pick up look like they have paid to be there.  The British Airways lounges are now as bad as your typical American airport lounge.  You have companies creating ‘advertorial’ magazines with minimal content which exist only to be handed out in airport lounges – magazines which no-one reads because they are useless.

Admittedly, British Airways has not fallen as low as Singapore Airlines, which gives out “What Pool and Hot Tub?” in its Terminal 2 lounge, but it is surely only a matter of time.

Should you want a sandwich, there is another seating area (with no natural light) by the entrance: 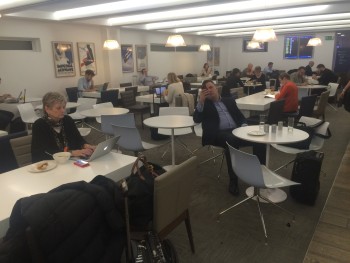 To conclude my review ….

This is not a bad lounge.  British Airways has done the best it can with the space and a lot of money was clearly spent on fitting it out.  As often happens with BA, though, it is happy to spend money on capital expenditure but hates spending money on day-to-day operating expenditure.

If they were willing to spend a few extra £££ per day on the food and reading material then it would be very good.  As it is, it is a perfectly pleasant place to sit and have a drink before your flight, or catch up on some work in the business centre.  If you have the choice, No 1 Traveller is still a better option overall.