This is my review of Club Millesime, the new Priority Pass at Heathrow Terminal 5 inside the Sofitel hotel.

EDIT: This lounge is no longer part of Priority Pass.  This review is only of interest if you are planning on staying at Sofitel Heathrow and want to know what the lounge is like.

I had a rather surprising arrival from Geneva on Friday.  The plane landed 10 minutes early, parked at an A gate and there was no queue at passport control.  This meant that I was running earlier than expected so I decided to use the time to check out the latest Priority Pass offering.

The news – broken by Head by Points in July – that the executive lounge of the Sofitel hotel at Terminal 5 had joined Priority Pass came as a surprise.  Someone at Priority Pass or the hotel had been thinking creatively.  After all, the British Airways arrivals lounge in Terminal 5 closes in the early afternoon and is only accessible by First Class, Club World and Gold card holders (no guests).

How to get there

If you’ve never walked from the terminal to the Sofitel Heathrow Terminal 5, you will find it a little further than anticipated.  That said, it only took me 7 minutes from walking into the arrivals hall to sitting down in the lounge.  This included the time that it took for the hotel to process my Priority Pass card.

In Terminal 5, you exit by the most northern set of doors and take the lift up to Level 1.  You are then sent down a long walkway – longer than it first appears – until you enter the hotel.  You then go down an escalator to the lobby.  Diagonally across from you, by the front door, is the Guest Relations desk.  This is where you need to sign in.

The guy on the desk was polite and insisted on walking me to the lounge entrance, which is just down the corridor.  Priority Pass holders also get access to the showers in the Sofitel spa, although I didn’t check this out.

What’s inside the Sofitel Heathrow lounge?

I arrived at 4.15pm, in the no-mans lands between lunch and dinner.  As you can see, the lounge is a large rectangular space (click on any of the photos to enlarge): 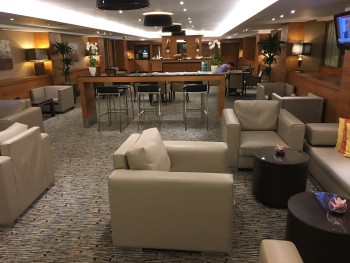 with lots of seating.  There were only two other guests when I went in.  A jazz soundtrack was playing, a little loudly, in the background. 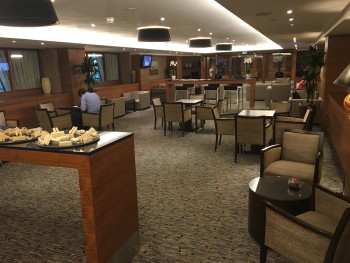 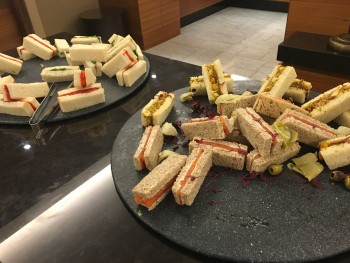 ….. scones and cakes.  It was almost identical to the British Airways ‘afternoon tea’ I had received an hour earlier in the air, but fresher. 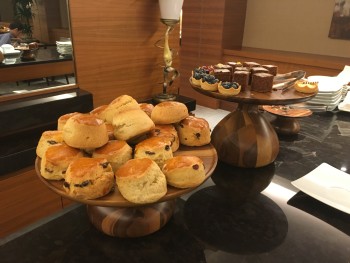 There was no alcohol available at this time of the day, but the coffee machine was working just fine and a wide selection of teas were also available.  Someone arrived to start setting out the evening drinks as I was leaving. 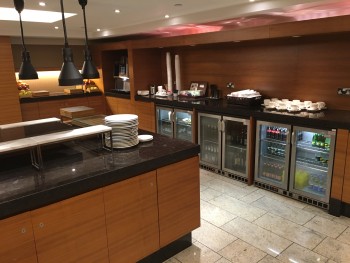 As the club lounge for the hotel, I imagine that a decent breakfast is available here in the morning.

There are two computers and a printer for guest use, and a large selection of newspapers and magazines, although the latter are in a holder at floor level and easily missed.  Don’t try to read HFP on the computers as they only have a handful of fonts loaded and the text either doesn’t display or looks unformatted!

My only complaint is that I wasn’t offered a code for the wi-fi.  This wasn’t an issue as there was a good 4G phone signal but you wouldn’t want to use this if you were based outside the UK and didn’t have inclusive data roaming.

If you have some time to kill in Terminal 5, it is a perfectly pleasant place to wait.

How to get in

As far as access goes, it is Priority Pass only.  Club Millesime is not a member of Lounge Club or Dragonpass.  It is part of Lounge Key if you have a World Elite MasterCard.  I doubt you can pay on the door either as it would undermine the value of the lounge as an add-on for hotel guests.

(You are not asked for a boarding pass, by the way.  There is no reason why hotel guests cannot access the lounge via Priority Pass if they are staying here!)

Priority Pass comes free with American Express Platinum.  You receive two cards (one is for your main supplementary cardholder) and each can bring a guest so a family of four can access a lounge for free.  Alternatively, you can buy a Priority Pass here.

HSBC Premier World Elite is the only travel credit card which comes with Lounge Key.

DragonPass cardholders can access the Regus Business Centre in Terminal 5.  This is not a lounge per se, however.  You can get a free cup of coffee but it only has a handful of seats and these are almost all around communal work tables where you are expected to get out your laptop.