When Hilton announced the changes to the Hilton Honors programme recently they included the following slide.  It contains some fascinating statistics about the scheme: 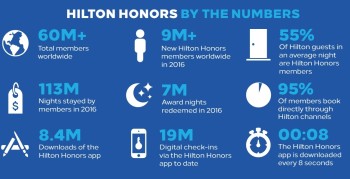 It is worth having a look at what some of these numbers mean.

60 million members is a stupidly high number – and this is still less than IHG Rewards Club which quoted 70 million last time I looked.  We are talking about managing a customer base which is basically the size of the UK population.  I’ve no idea how many people Hilton has to employ to oversee all this but it must be huge.  Even if only 1% of members had the need the contact Hilton in any particular year, that would be 600,000 calls or emails.

(For comparison, Avios has 7 million members.  There is also duplication here from people who have BA, avios.com and potentially Iberia Plus accounts and so get counted three times.)

7m award nights were redeemed in 2016.  This is huge.  Hilton has 4,700 hotels in its system.  This means that the average property is doing four reward rooms per night, every night.  In reality, those redemptions will be skewed towards specific properties in specific cities.  One of the side effects of the changes to the programme will be to make redemptions at ‘average’ properties more attractive, especially off peak.

95% of members book direct.  I am very surprised by this, because Hilton has been at the forefront of aggressively promoting direct booking versus using Expedia etc.  As members make up 55% of room nights, and 95% of that 55% is booked direct, you need to question how much of a problem indirect booking via Expedia etc really is.  Even if half of all bookings via non-members came via third party channels, that would only represent 25% of total room nights.  In reality it will be smaller as much of the business from non-HH members will be groups who contract directly.

Signing up 9m new members last year is a major achievement.  It isn’t surprising, of course, given that the Hilton website now tells you that you will get a better price if you join, but the sheer scale of this is impressive.

If you ever believe that the major hotel loyalty programmes are sideshows to their core business, think again.  As you can see from the numbers above, you are dealing with a membership base the size of a major country.