I’m currently in Berlin for the ITB – the biggest travel show in the world.  Messe Berlin is so big it has two train stations!

One of the main attractions of this year’s show is the new Qatar Airways Business Class seat, the Qsuite.  You can learn more about it on the Qatar Airways website here.

The Qsuite has been highly anticipated as it promised to bring, as Qatar describes it, “a First Class experience to Business Class” and I must say it did deliver.

The overall display of the seat at ITB was pretty clever. In the morning it was covered with a white cloth and only at 11am the seat was revealed with ceremony. 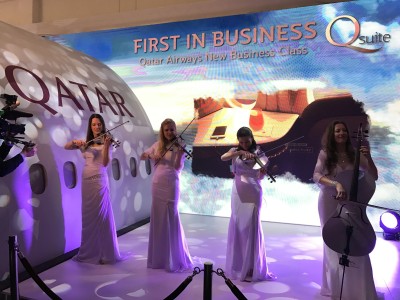 But even after the cloth came off you were still not able to see much! 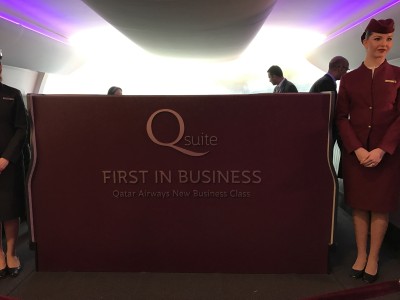 I was invited to the press conference at noon and had to wait until afterwards to finally be allowed in the Qsuite and lay my eyes on the seat. 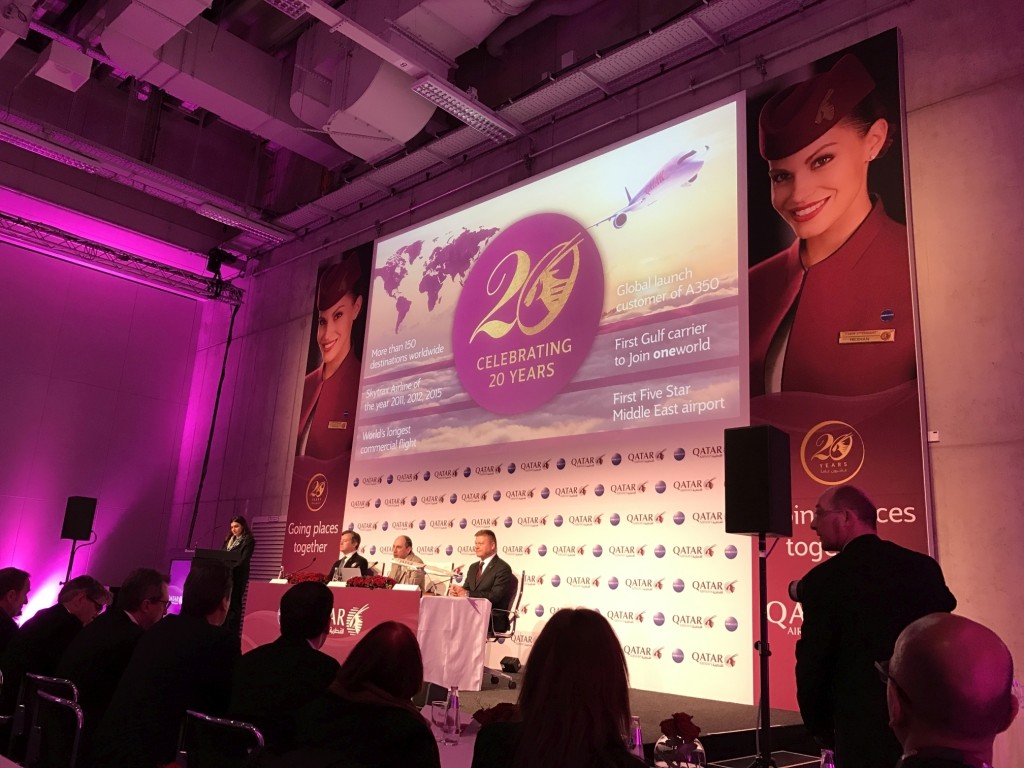 ….. is actually a suite.  With a door.  There is absolutely nothing like this available in business class at the moment.

The Qsuite aims to caters for families, couples as well as individual travellers giving as much or as little privacy as desired.

If a family of four or a group is travelling together the wall between the seats can be opened and the tables create a dining area for four.

If that sounds difficult to imagine, here is a PR photo: 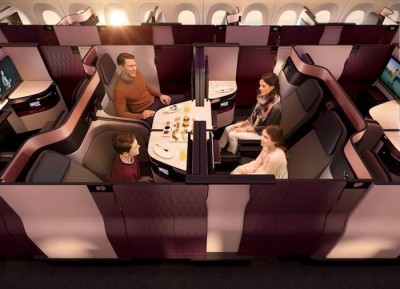 For a couple travelling together, the two beds form a proper double bed. 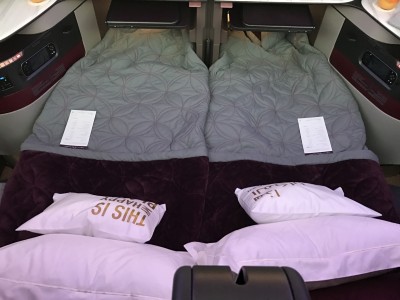 Here is the glossy official look: 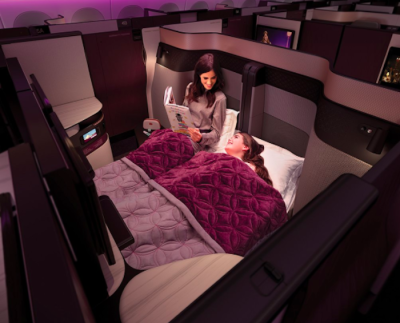 Here is a picture from the Qsuite at ITB with the snack selection you will find on board. 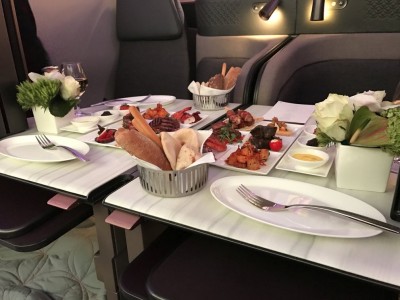 The White Company has designed pyjamas exclusively for Qatar which every passenger in the Qsuite will receive.

We were also told at the press conference that the Qsuite will have a turndown service. 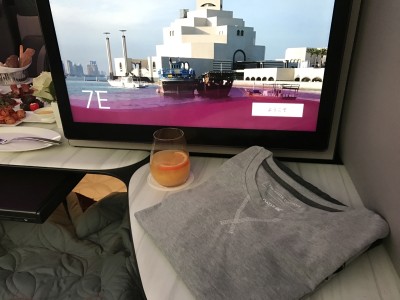 The window seats are perfect for people travelling alone. You can close the door and switch on a ‘do not disturb’ button for total privacy.

This is the ‘official’ image of how the window seats will look: 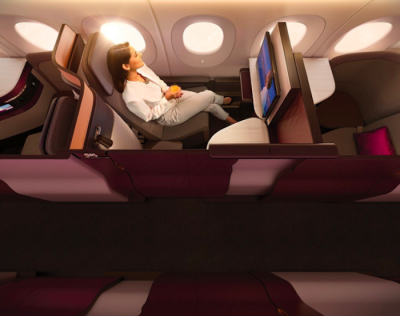 The next photo shows the side table in an A seat.

As you can see underneath the table are several plugs including UK and USB, the remote for the entertainemnt system (Qatar has got 3,000 entertainment options) as well as the panel to arrange the seat from upright to flat. 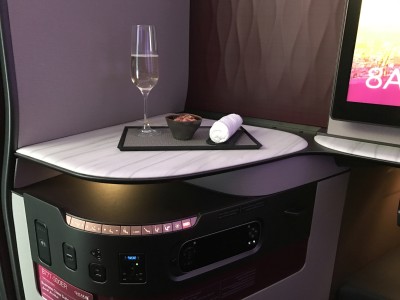 This is the dining table at one of the window seats. There is a lot of room for food and drinks.

The new washbag on the side table is by BRIC’S. 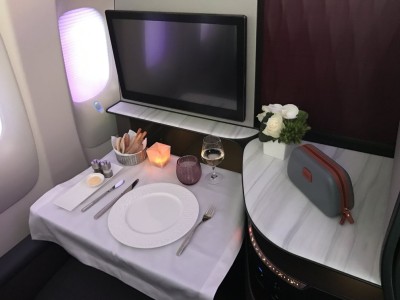 A quick look at the wine and food menu showed a great selection of drinks and food. 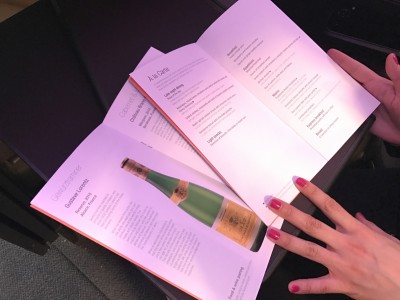 Here is a 75 second video I shot myself of the event and the demo seat:

Where will you find this seat?

The current plan is to fit this seat to the new A350-1000 and Boeing 777-300ER aircraft currently being delivered as well as retrofitting it to Qatar’s existing Boeing 777 fleet. This will take the 777 from having the worst business seat in the Qatar Airways fleet (see Rob’s review here) to the best.

According to CEO Mr. Akbar Al Baker there are also plans to replace the existing seats on the 787 and A380 fleet but this will require a modified design to the narrower width of those aircraft. The aim for those seats is to create total privacy like in the new Qsuites.  There are also plans to reinvent Qatar’s Economy Class as Al Baker believes that there should be the “same standard of additional comfort in coach class”.

The Airbus A330 and A340 aircraft will not be refitted.

The first plane to receive the new seat, a 777, will be flying between Heathrow and Doha.  The start date was announced as June but Qatar has a track record of running late so don’t make any speculative bookings (Al Baker was blaming the delays on Airbus at the press conference…).  Paris and New York will follow and if everything goes according to plan all A350 and 777 will have the Qsuite by mid to end of 2018.

The Qsuite is a real reinvention of the business class seat. You can travel on your own and enjoy total privacy, you can travel as a couple and sleep in a double bed, or travel as a family and have a family dinner on the plane.

All this, and you’ll earn Avios and British Airways tier points when you fly it as well!  It will also be available for Avios redemptions of course.
Qatar has got a global patent on the design so we won’t be seeing anything identical to the Qsuite on other airlines.  Qatar has definitely upped the game, putting pressure on their Middle East rivals and leaving the British Airways Club World – and arguably First Class – seats for dust.

You can learn more about the Qsuite on the Qatar Airways website here.