Regular readers of Head for Points will know that there has been substantial discussion on the site in recent weeks about downgrades.  In particular, the issue is whether British Airways is prioritising Avios tickets, and 241 tickets in particular, because it does not have to pay the legally required EU261 compensation in cash, if at all.

Unfortunately for BA, a regular contributor to HFP was recently downgraded on a 241 ticket.  This means that we will be following his claim for full compensation in real time.

To put the other side of the story, I asked a British Airways check-in agent if they could tell me how the downgrade and offloading system is meant to work.  This is what they said – I have edited the comments to remove any identifying details:

We will be told which flights are oversold at our briefing when we start work that day. Depending on how oversold it is a nominee may be appointed to approach all customers for that destination before they get to the desk, ie. when they enter the queue.   They are given details of the compensation offered by us on the day and the alternative flight we can offer them, together with any info on hotels and transportation to those hotels.  Sometimes we have to re-route via another airport so will send them to overnight up there in readiness.

If the flight is just one or two oversold we will be asked to approach customers as they check in or drop bags. The information of the offer is shown in the header page for that flight together with ‘bail out’ options (as we call it). In fairness some of the newer staff can be scared of asking as any hint of overbooking may worry a customer so being new some of them tend not to ask. 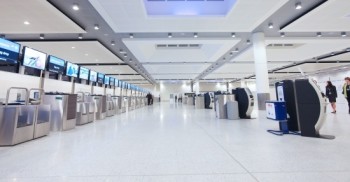 If someone volunteers to come off for cash they are told that they will still travel on the flight if space is available at closure. They will then be on-loaded at that time but in whatever seat is left. So sometimes not the best of options.

If we have no volunteers and all seats have been assigned then the last person to present themselves at check in will be told that unfortunately at this time there is no seat for them and they will be asked to return at flight closure. It’s only at that time will we know if they can get on or not.  If they don’t get on we deal with the initial conversations (never a nice thing to do) and advise the compensation they will receive, etc. A manager will come down and issue the cash card, and we issue vouchers for hotel, meals, etc.

Downgrades can, and do, happen to anyone. Generally those safe will be those who are Gold, Silver or OW equivalent, or those who’ve paid for seats.

These [paid] seats are always held until flight closure and only released if a customer doesn’t arrive in that time. Some of those non status holders will pay to reserve seats as its perhaps a trip of a lifetime to them so they want to be sure of being together. I’ve seen Golds downgraded over others without status because they haven’t held their seat whereas all others have (yes, not often but it can happen). That’s why I always recommend people check in online as soon as they can, even if they can’t print the boarding pass.

If there is possibility of downgrade passengers will still go to the lounge and be told there. If the flight is oversold they will be kept landside.  If we’re expecting downgrades, seats are held in the next cabin down – usually the bulkhead in WT+.

In the situation of an aircraft change, this will generally not affect premium travellers adversely [….]  All would get seats still, though some maybe not the one they wanted.  We struggle more with offloads on these occasions as there are not so many World Traveller seats for downgraded passengers.  Again we deal with that as a voluntary thing seeking volunteers. Again any offloads would be the last ones to check in again, ie. sequence number.

I’ve had a situation at the gate where we had to remove 8 people from the flight because of weather (winds) not allowing enough fuel and all the passengers to travel. We had to ask for volunteers at the gate and we easily got enough. Had we not got enough the manager with me confirmed it would have been last to check in.

So all in all I do think this panic [over Avios passengers being targetted for downgrades] is unfortunate.  Of course things can and do happen but I find it sad that you’re taking one incident and making it seem like it’s happening all the time. From my first hand experience that is not the case at all.

They key thing is if it were, why do we take so much time actively seeking volunteers if we already know who is going to be downgraded?

Thanks for this, I think all of the readers appreciate it.  I would note, however:

Note the comment above about what happens to those who volunteer not to travel.  If it turns out that a seat is available at departure for any reason, your compensation will be rescinded and you will be made to fly in that seat, wherever on the plane it is.

Both of the cases I am currently looking at involved customers who were specifically told by Duty Managers that they had been downgraded because they were on Avios tickets.

When my family was downgraded from Club World three years ago, both myself and my wife were Silver so there was no protection for us as status holders.  The other case I am currently chasing on behalf of a HFP reader was where the reader had paid for seat selection but was on an Avios ticket and was still downgraded, so that is also not a guarantee of safety.

The idea that volunteers are initially sought at check-in is totally at odds with what happened to our contributor.  He was blocked from online check-in and told at Edinburgh that he was being downgraded.  The check-in desks for his flight at Gatwick had not even opened at this point so there clearly had been no attempt to seek volunteers.