Last week we published something on HfP which, whilst totally innocent, inadvertently had the potential to cause us a PR problem if it had been publicised.  We shut it down quickly with a full and genuine apology to the people concerned and the problem went away.

This is not the first time we have done this.  Our strategy in such cases is to openly and immediately admit our mistakes, make whatever corrections are needed, make sure no-one has lost out and move on.

I only mention this because we all have to do crisis management from time to time.  I dealt with far bigger ones during my 16 years in the City but I followed the same basic principles as I do with HfP issues.

I said on Sunday that I wasn’t going to start talking about the ‘why’ and ‘how’ aspects of the great BA system outage.  I’m not an IT specialist and even if I was I doubt I could add much.  Aimless speculation is just a waste of screen space.

What is clear, though, is that British Airways was totally unprepared for this.

I am 100% sure that British Airways has a plan in place in case of a plane crash.  (Apparently as a ‘media outlet’ I am meant to have a strategy in place for the death of the Queen, although I must admit we haven’t done so yet.  Ideas welcomed on that one.)

Realistically, though, a total BA system outage was always far more likely than the loss of an aircraft.  The new FLY passenger control system fell over numerous times last year, although the system was never down for more than a few hours.  US airline Delta had an identical outage to the British Airways incident last year.  It was, surely, only a matter of time before the same thing happened here.

What we have seen over the weekend, however, is the absence of any planning at all.  The correct solution, of course, would have been simple.  Tell passengers you are truly sorry, that they should make whatever arrangements are necessary to get to their destinations, and that BA will guarantee to refund them.  That’s it. 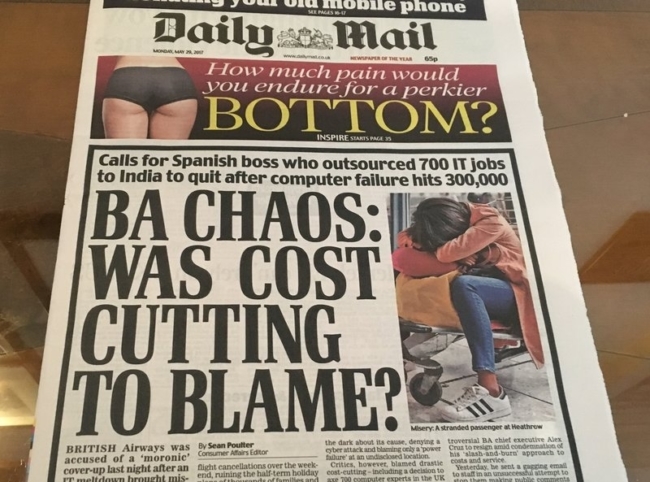 Would some people have exploited it?  Potentially, but a very minimal cost overall to BA.  What we saw instead was an astounding collection of stories which will no doubt make a great PR case study one day:

BA refused to transfer passengers in London to other airlines.  I know one Gold Guest List member who managed to get himself moved via the GGL hotline to a oneworld partner, but no-one else.  There were flights taking off every 3 minutes on Saturday with empty seats which could have been filled with British Airways passengers, but BA refused to move passengers across.

(For clarity, my understanding is that airlines do not pay the going rate when this happens.  There is an industry standard in place.  A few years ago Lufthansa moved me from Lufty First Class to Emirates First Class when my Lufthansa connection was cancelled and I promise you that LH didn’t pay Emirates £4,000 per person.)

Outside London,  BA has been moving passengers to other airlines BUT there are reports that Avios redemption tickets are being excluded as they are non-transferable and passengers told to wait for the next day with an available BA seat.

BA is refusing to refund passengers who booked tickets on other airlines using their own initiative.  To quote one Flyertalk user last night:  “I booked a flight back to Glasgow using easyJet from Stansted on the basis that: I couldnt get through on any phone line, I couldn’t get the website to work, Skyscanner was reporting no available seats on BA to Glasgow and we were told not to go to the airport.  Now BA have told me (via twitter DM) that they wont compensate me for my easyJet flight.”

I have independent reports that both the call centre and some airport staff were telling some passengers on Saturday not to try claiming EC261 compensation because the incident was caused by a lightning strike and was therefore “weather related”.  There now seems to be an acceptance that lightning had nothing to do with it.

However, BA can also claim an exemption for EC261 by claiming “extraordinary circumstances” although any attempt to do that would almost certainly end in court.  It is already trying this one as this tweet shows: 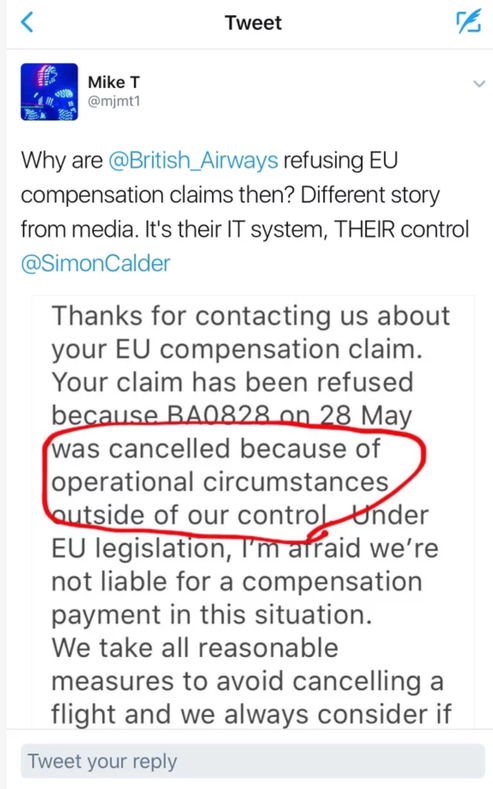 Looking again at Flyertalk, BA is not protecting return flights where the tickets were booked as 2 x one-way tickets.   They will rebook your outbound flight from the weekend without charge but – if your inbound was booked separately – you are stuck and will need to buy a new return.

And let’s not talk about the merits of having Alex Cruz wear a hi-viz vest so he looked like a school lollipop man in his TV and video appearances, despite being filmed sitting in an office.   Or BA stating that everything would be OK on Sunday, when 75 flights ended up being cancelled.

It is all trivial and petty.  The impression it gives is that the first priority of the airline is to avoid paying out a single penny more than is necessary which is ironic as the press coverage is focusing on whether cost cutting was the cause of the problem in the first place.

It is also insulting to the thousands of BA staff members, many of whom came in voluntarily to help out, who were trying their best all weekend in the face of a total IT wipe-out.

No-one expected BA to have a few hundred call centre workers on standby.

No-one expected them to be able to rustle up extra aircraft at no notice and be able to keep Heathrow open all night to clear the backlog.

No-one expected them to break the strict rules on pilot and crew working hours in order to get people away.

People understand all this.

What people don’t understand is why a company appears to be putting its unwillingness to pay out compensation ahead of any desire to get its passengers away as quickly as possible.  At the end of the day, the raft of empty seats leaving Heathrow over the weekend belonging to other airlines is the real testament to the way this problem was handled.