This is part two of my review of British Airways First Class between Beijing and London.  Part 1 (click here) looks at boarding, the seat, IFE and bedding.  Part 2 focusses on food and drink.

British Airways has served Laurent-Perrier Grand Siecle for some time now.  This comes in a particularly attractive bottle which may be why it was chosen.  At £110 per bottle (Oddbins price) it is only £20 cheaper than Dom Perignon.

In general, I find this a decent choice and definitely a notch ahead of Etihad.  The Billecart-Salmon served by Etihad in the First Class Apartment is very downmarket by comparison, at £40 in the shops.  The NV Rose served by Etihad is a little pricier at around £60.

BA also offers a British sparkling wine, Bolney Estate, which is cheap – £28 – but a nice local touch.  I was, for example, surprised by how little Japanese whisky was available on my two JAL flights over Easter.

The white and red wines are pathetic in terms of value.  I put the list through Google and the average UK retail price of the bottles on offer was £10 – £15.  Whilst I accept that price and taste are not correlated, especially given the impact of altitude on taste, this is embarassingly cheap for a First Class selection.

A typical Emirates First Class wine, such as the Grgich Hills Estate Chardonnay 2013, is nearer £25-£30.  Some, such as The Mascot 2009, a Sauvignon Blanc, are nearer the £90 – £100 mark.  The Etihad First Class selection is also pathetic and comes in at around £15 at supermarket prices.

Whilst the Grand Siecle is fully acceptable, the rest of the list does not cut it.  The same goes for Etihad, however.  Take Emirates if you’re looking for a First Class wine experience.

There isn’t one.  This is British Airways.

That said, I find that I tend not to use on-board bars when travelling in First Class.  I’m not sure why – sometimes it is because I can’t bring myself to walk all the way through Business Class, although on Etihad it is between Business and First on the A380.

The BA First dining concept is, in theory, ‘dine on demand’.  In reality most people eat at the time suggested by the crew, and I don’t think that I have ever not done this.  I don’t know if you are likely to get a better meal or a worse meal if yours is prepared separately from the rest.

There was no amuse bouche as we flew a couple of days before it was brought back.  You would get one if you flew BA First Class today.  You will be searching in vain for an Etihad-style ‘palate cleanser’ between courses though.

The lunch menu was, for starters:

Don’t go looking for caviar here.  I went for the prawns and mango salsa.  I expected it to have a bit of a kick to it but it was surprisingly bland.  There had been an attempt at ‘fancy’ presentation though. The accompanying bread was dry. 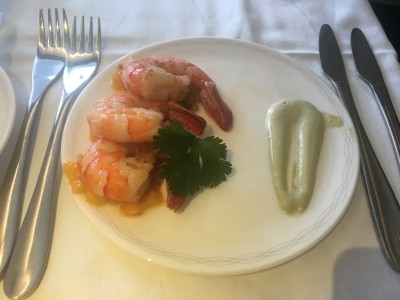 There were five main course options:

Salad of marinated char-grilled chicken with tabbouleh and hummus

I took the fish.  This was, to be honest, very good.  The fish was moist and the mashed potatoes were very hot and creamy, almost identical to the mash I had in Etihad First. 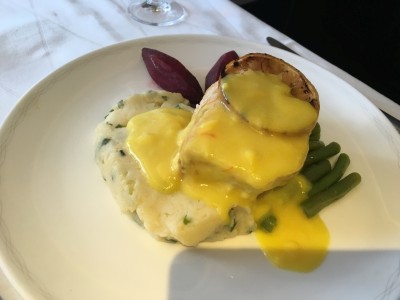 There were two dessert options, plus a cheese plate:

I took the crepes.  These were not warm enough but had a good consistency – I thought they might be too soggy but they came out OK. 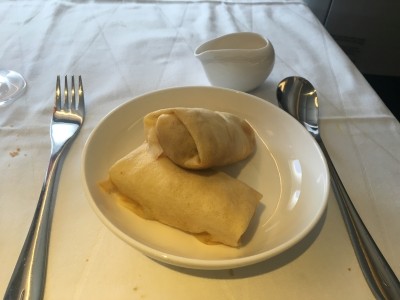 For comparison, Emirates – with an identical 14 seat cabin – had seven appetisers vs BA’s four, six mains vs BA’s five and four desserts vs BA’s two.  Etihad is 4 / 5 /4 but you can’t really compare because the on-board chef will make you anything you want if he’s got the ingredients.

In terms of food quality and presentation, Emirates beats BA.  Etihad beats BA in terms of presentation although, if I’m honest, the quality was not much better.

BA scores points for the Wedgwood crockery used, although it is nowhere near as stunning as that used by Etihad or Emirates.

The knives and forks used were embarrassingly poor.  BA branded, they looked incredibly old and cheap and gave the impression that you should be lucky they even matched.

There is a second ‘light meal’ served nearer landing.   The second meal had fewer choices and smaller portions.  The three starter options included a duck salad, spring rolls or, erm, plain salad leaves (the duck salad without the duck?) with dressing – I took the spring rolls: 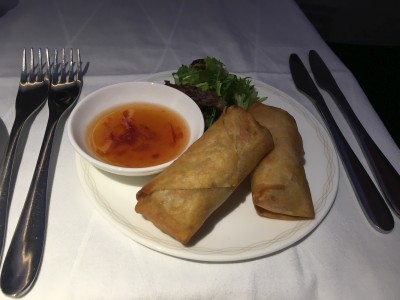 There were four main options – I took the dim sum selection: 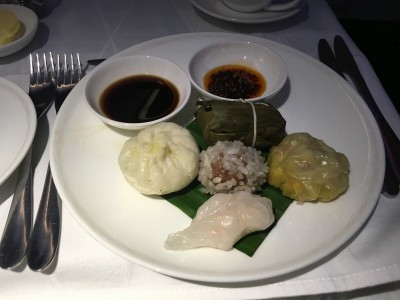 and two desserts, although I don’t really call ‘a selection of biscuits’ a serious First Class dessert – unless they had an Orange Jacobs Club, which I doubt!  I went for the ‘double chocolate cake with raspberry coulis’: 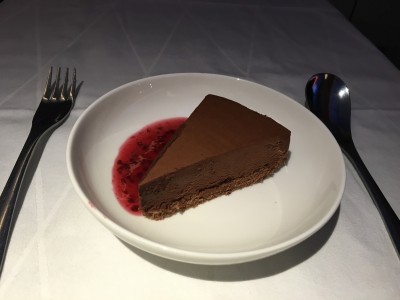 It was all about as average as it looks in the pictures.

British Airways crews can be very variable, as most regular flyers know.  As I mentioned earlier, this crew did well although they did disappear for substantial lengths of time – I wrote in my notes that I didn’t see a single person for the length of Bridget Jones’s Baby …..

British Airways First Class cannot even begin to compare with Emirates or Etihad in most areas.  Where it scores best is on food (vs Etihad), drink (vs Etihad), number of seats (vs Emirates) and general ambience, where I do think BA does well.  There is a feeling of ‘style’ which the other airlines miss, and this has been ramped up even further on the new Boeing 787 aircraft.

Next week …. I am flying Lufthansa First Class for the first time in three years.  Whilst the Middle Eastern airlines are masters of hype, Air France, SWISS and Lufthansa actually lead the way in terms of First Class quality.  Let’s see if Lufthansa can keep up their usual standards.