Qantas and Emirates revamp their partnership, with an impact on Avios tickets to Australia

As the major partnership between Qantas and Emirates approaches the end of its original five year term, the two airlines have announced a five year extension – plus major changes in how it will work.

These are, I think, positive from a UK perspective.

At present, Qantas flies Sydney – Dubai – London Heathrow using an A380.  This service is to be scrapped from 25th March.

Instead, Qantas is launching Sydney – Singapore – London Heathrow using an A380.  The timings are virtually identical to the British Airways flight on the same route.

Avios seats might become slightly easier to get on the existing British Airways flight to Sydney, which goes via Singapore.  Some travellers will now choose Qantas over BA, either for just Heathrow to Singapore or all the way through.  The Qantas A380 offers First Class and Premium Economy, a la British Airways.

At the same time, the number of Avios seats to Dubai will drop – although this market is already well served by British Airways into both Dubai and Abu Dhabi.

Remember that Qantas is also launching its NON-STOP 17-hour flight from Heathrow to Perth in 2018.  This will use a new Boeing 787.

Even though Qantas will no longer fly via Dubai, you can still book Emirates flights via Dubai to Asia and Australasia as Qantas codeshares.  This means that they will continue to earn Avios and British Airways tier points, as this HFP article explains.

Qantas is making another change at the same time which may also impact your Avios redemption thinking.  Singapore to Melbourne is being upgraded to an A380 which means increased capacity and the introduction of First Class and premium economy.

The route map below, click to enlarge, shows the possible routes between the UK and Australia using Qantas and Emirates.  You are spoilt for choice. 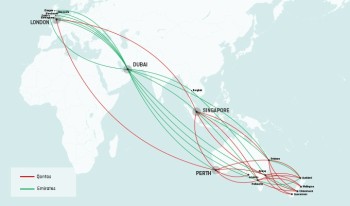 In a sign of what may be coming to sister airline British Airways soon, Aer Lingus has launched ‘fewer frills’ ‘Saver’ tickets on some routes from Dublin to the USA.

This are currently priced at €80 less than a standard return ticket.  You DO still get free food but you won’t get a free suitcase, free seat selection or a blanket or headphones on board.

If you eventually end up checking in a suitcase then there is minimal saving here and, on West Coast routes, you will end up paying more in total.  Assuming that the majority of US leisure travellers will be checking in a case, this seems to be a move aimed mainly at positioning Aer Lingus alongside Norwegian, price wise, on flight comparison sites.

What is weird is that you need to stay away for a Saturday night in order to book a ‘Saver’ fare.  This is typical ‘legacy airline’ behaviour (Norwegian doesn’t do this).  And, as I said above, these fares are often not even cheaper if you end up checking luggage, which most people will.

You will still earn Avios on ‘Saver’ fares at the standard rate of 3 per €1 on the base fare.

You can find out more about long-haul ‘Saver’ tickets here.