This is my review of the lounge at the Signature Flight Support private jet terminal at London Luton Airport.

Regular readers may remember that, back in June, we wrote about a deal that easyJet had done at Luton Airport with Signature Flight Support.

When flying easyJet, you can now arrive and depart from the new Signature Flight Support private jet terminal at Luton.  You can park at the terminal, which includes its own customs, immigration and security screening facilities.  You can then relax in Signature’s lounge until it is time for your flight, at which point you will be driven across the tarmac to your aircraft.

So far, so interesting.  The cost is a bit of a shock though – £475 for one person and £120 for each additional person in the group.  Given that London City offers a virtually identical service for £90, I thought the appeal would be limited.  You can read more on the easyJet website here.

Anyway ….. as the easyJet PR team were very keen that we write about this new service, and we did, I wasn’t expecting any problems when I suggested we review it.  After all, London City Airport were very happy with the reviews we did of their private jet terminal lounges and even gave us some passes for a competition last month.

easyJet told us to get lost.

I didn’t care.  I found a way of getting access anyway…..

How to get to Signature Flight Support

Signature Flight Support operates out of two stand-alone terminals at Luton.  Terminal 1 is the primary facility and is the one where the lounge has just received a facelift.

I took the train to Luton Airport Parkway and hopped in a taxi, since the Signature terminal is separate to the main airport.  The cost was only £4.40 and it took literally two minutes with minimal traffic.

The Signature terminal, as you can see above, is impressively minimalist.  The look is only spoilt by being sat next to a Holiday Inn Express.

What you find inside

I wasn’t quite sure what to expect.  I think somewhere in my mind I expected it to be staffed by the sort of slim 20-something women with long straight blond hair who work in Mayfair art galleries.  It was very quickly obvious that the staff were interchangeable with your average cheerful, bundle of energy, easyJet employee.  (Which, for absolute clarity, is perfectly fine!)

The taxi dropped me at the door, I gave my name at the reception desk, showed my passport and was ushered into the lounge which was immediately ahead of me.  It is a two story building but the upstairs area is used for offices and meeting rooms.  You are restricted to the lounge.

Here is a short (40 seconds) YouTube video which shows you a panorama of the lounge.  It was empty when I arrived, and I think it peaked at eight people during the time I was there.

You will see from the last bit of the video that a full size short-haul aircraft was parking at the terminal at the time.  I was hoping to see someone famous jump out but the two passengers looked like 20-something Eastern European gangland bosses …..

What you have inside the lounge is one large space: 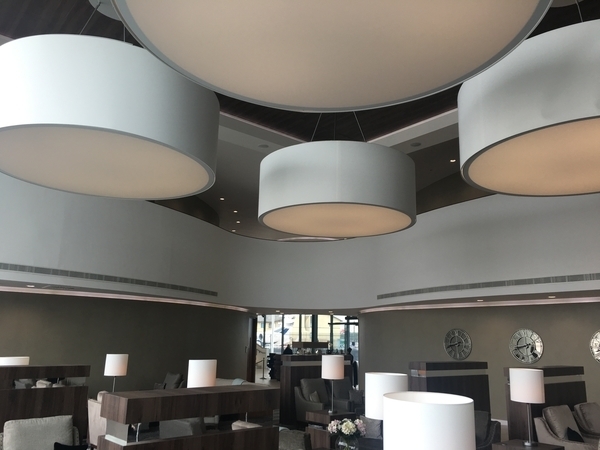 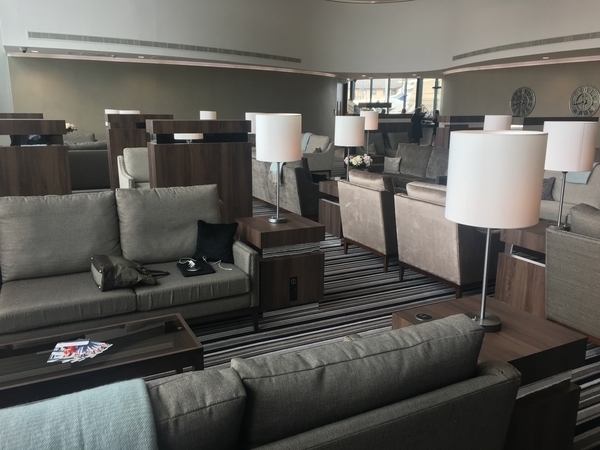 The only slightly private area is this very tiny kids play space: 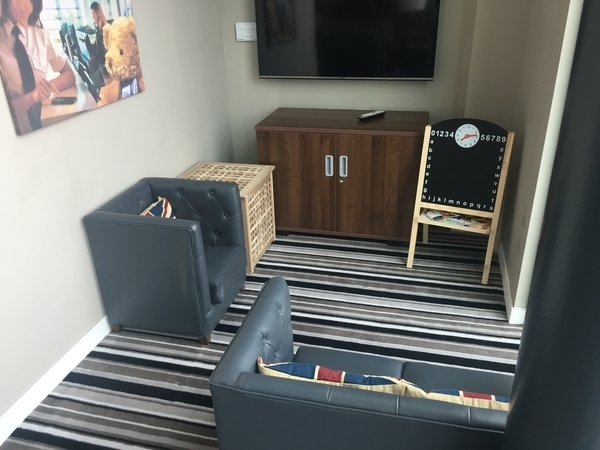 ….. but even that is not blocked by a wall or door from the main lounge area.

There is one table with a handful, literally a handful, of newspapers and magazines with a TV above it.

In one corner is the bar and refreshment area: 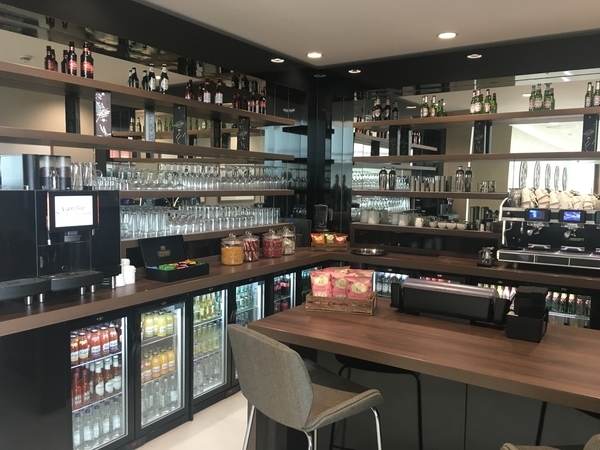 Don’t come here expecting fine food, or indeed any food.  The only nibbles were crisps, popcorn and packaged biscuits.

There was a coffee machine (which could do caramel cappuccino, a first for me from a small vending machine) and a few fridges with soft drinks, beers and Moet et Chandon champagne.  The only spirit I could see was Johnnie Walker Black Label whisky – not even Blue Label …. 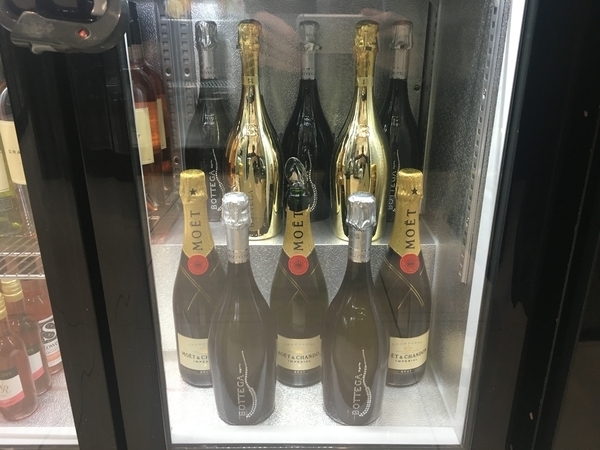 I didn’t take a photo in the gents but it was good to see a selection of toiletries in a basket, including shaving kits.

I was there for two hours.  As the lounge has recently been refurbished, it is not short of power points and the wi-fi was decent.  I had no problem getting some work done.

The real selling point, however, is the full length and full height glass window overlooking the tarmac.  You get an excellent view of aircraft moving around the airport as well as the nearby maintenance hangers.  Unlike being in a main terminal, the aircraft are directly in front of you, not separated by the length of an airbridge.

The staff generally left me alone.  I was offered a drink when I first sat down, and at one point a representative of the private jet company I was with came over to introduce himself.

What was a little unnerving is that there are no departure boards.  The staff know who you are and will track you down at the right time (there isn’t far for you to wander, let’s be honest).  However, I began to get a bit nervous as my 4pm departure time approached and no-one came to me.

I was eventually called at 3.58, taken through private security screening and driven in a minibus: 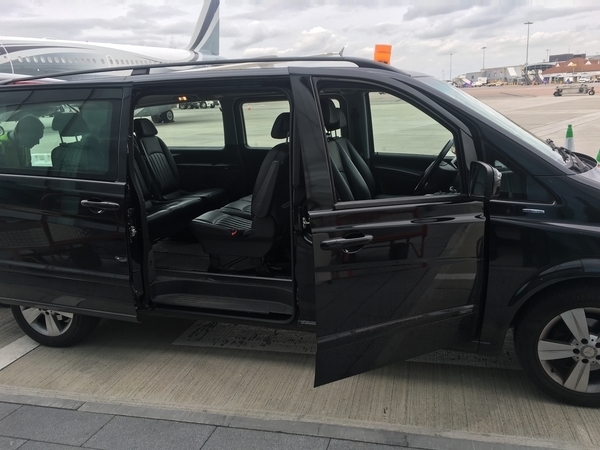 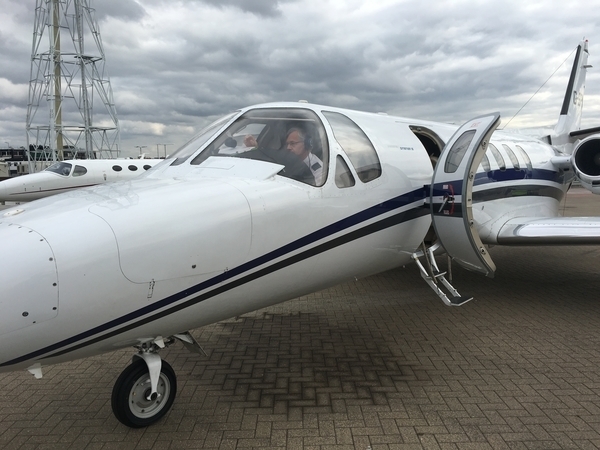 More on that, including the reason I was on it, in a day or so.

What does it cost if I am flying on a scheduled airline?

You don’t actually need to be flying easyJet to use the lounge.  Signature works with other operators at Luton as well.

For £475 (£595 for a couple) you can drop your car at the Signature terminal, sit in their lounge for an hour, use a private security channel and then be driven across the airport to your easyJet plane.  This does seem excessive.

You can’t knock the Signature Flight Services lounge.  Realistically, given the small number of people who use it, running a high quality food service would be uneconomic – although they could improve the quality of drinks.

But still …. for £90, you can use the First Class lounge in the private jet terminal at London City Airport (as Anika did in this review) and be driven to your plane.   Unless you’re flying BA, who are the only major airline at London City not to co-operate.   I think this is decent value if you’re not price sensitive.  £475 for one person, plus £120 for a partner – for a service advertised at easyJet customers – is a totally different ball game.

At least you have the choice, of course, and you could argue that it is a bargain compared with the Windsor Suite at Heathrow at £2,750 + VAT for 1-3 people …..

You also get access to Plaza Premium, Delta Air Lines and Eurostar lounges.  Our American Express Platinum review is here. You can apply here.