This is my review of a Royal Jordanian A320 short-haul flight to Amman.

Royal Jordanian has a surprisingly low profile amongst Head for Points readers.  They would have been further off my own radar if I didn’t have a friend who uses them regularly and is a fan.

This is why Royal Jordanian should be on your radar:

As a member of the oneworld alliance, you can earn and redeem Avios for their flights

Via its base at Amman in Jordan, you can fly to various parts of the Middle East and Asia, including Bangkok and Kuala Lumpur

I recently flew back from Dubai to Heathrow on Royal Jordanian.  This article covers my A320 short-haul flight to Amman.  Future pieces will cover the Crown Lounge in Amman (click here) and the Boeing 787 business class service to London (click here).

Royal Jordanian uses Terminal 1 at Dubai International Airport which is the same terminal as British Airways.

Check in was a breeze as you would expect at 5.45am for a 7.45am departure.  I was given a pass for the Royal Jordanian lounge which is actually a shared facility.  However, due to the poor signage in the terminal, I headed in the wrong direction and found myself outside the British Airways lounge at a few minutes past 6am.

oneworld airlines have reciprocal lounge access so British Airways was happy to let me in.  I was totally alone.  It was a bit weird.  Everything was set out, including an extensive hot breakfast buffet, but there were no guests.  I stayed for an hour and in that time not a single other person entered!  The first BA flight is not until 10am so it isn’t surprising that no-one had arrived by 7am when I left.

I usually don’t like the new BA Dubai lounge because it is too small – substantially too small if we’re honest.  When you’re on your own that isn’t really a problem and this was my best visit yet.

Royal Jordanian has ‘proper’ short haul business class seats in Crown Business as is common in the Middle East.  If you only remember one thing from this review, let it be this.

As per the seat plan here: 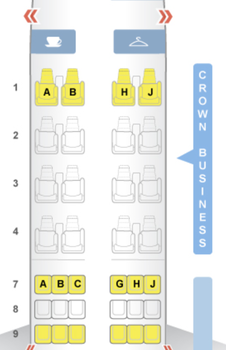 there are four rows of 2 x 2 seating.  Here are a couple of shots of the seat:

with this one showing the seats when reclined:

Design-wise it is far too beige for my liking.  What the seats lack in style they make up for in size and comfort however.  Whilst I didn’t use it, there is also IFE with a monitor built into the seat arm.

Unfortunately, I had a problem with my seatmate as you can see:

I assumed the guy had boarded wearing sandles.  However, when we landed, he pulled out a pair of trainers and socks from under his seat.  He had clearly decided that his feet needing some fresh air.

I also had issues with my neighbour across the aisle.  When I flew Qatar Airways First Class a couple of years ago I had a problem with my seat mate watching videos on his iPhone without headphones.  And guess what – I’ve no idea if it was the same guy, but yet again I was sat near someone who had no qualms at all about watching iPhone videos with no headphones.  No-one else seemed to care.

At just over three hours, Dubai to Amman is realistically more medium haul than short haul.  We were only offered a one plate platter which was a little disappointing and, to be fair, is a lot less than British Airways would offer on a 190 minute flight:

It didn’t do much for me but I had eaten well in the BA lounge.

What does Royal Jordanian cost on Avios?

If you just booked Dubai to Amman on Royal Jordanian, it would cost 20,000 Avios plus £65 of taxes in Business Class, one-way.

Economy is 10,000 Avios one-way plus the same in taxes.  Paying the extra 10,000 Avios for Business Class is not a bad deal given the big comfortable seats and the chance to use the British Airways lounge in Dubai.

Overall the Royal Jordanian short haul experience was perfectly acceptable although lacking in any ‘wow’ factor.  I enjoyed the oversized seat but the food and service were underwhelming.  That said, given how early I had got up that morning, I wasn’t necessarily in the mood to be ‘wow’ed and was simply happy to have a decent seat to get another three hours rest.

Once we landed in Amman, I headed off to visit Royal Jordanian’s flagship Crown Lounge …..