This is my review of Royal Jordanian’s Boeing 787 business (Crown) class from Amman to London.

This is the third and final part of my series of articles looking at using Avios to fly Royal Jordanian.  Part 1 on their short-haul business class service is here.  Part 2, looking at their flagship Crown Lounge at Amman airport, is here.

As a member of the oneworld alliance, you can earn and redeem Avios for their flights

Via its base at Amman in Jordan, you can fly to various parts of the Middle East and Asia, including Dubai, Bangkok and Kuala Lumpur

As a reminder, I booked this flight using Avios.  It was not organised by Royal Jordanian.

Royal Jordanian flies from Amman to Terminal 3 at London Heathrow once per day.

To be honest, the additional gate screening appears to be profiled.   I was waived through with no attempt to even look in my hand baggage, which did contain a laptop. 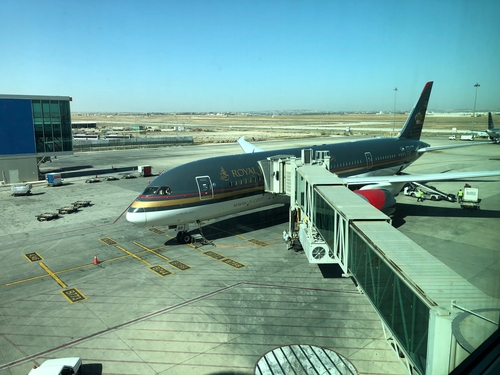 Royal Jordanian is flying brand new Boeing 787 aircraft between London and Amman although I have heard reports of switches to short-haul planes on days when loads are light.

I had not been able to select a seat in advance, either via the app or the website.  This seemed to be down to IT issues (I originally could not select a short-haul seat but it finally began to work).

At check-in in Dubai I was allocated 4A.  This turned out to be a bad window seat because ….. it has no window.  As it turned out, I had no seat neighbour and moved myself to 4C on the aisle.  This felt roomier because I didn’t have a windowless wall next to me.

I was offered champagne (Taittinger Brut Reserve) or a cup of Arabic coffee upon boarding.  A bottle of water had already been placed on the seat.

Here are a few shots of the cabin.  It is a little unfortunate that the plastic bags containing the blanket and pillows have the effect of making the seats look like something from a discount sofa warehouse!

Note the missing window by 4A.  Click on any of the images to enlarge a little. 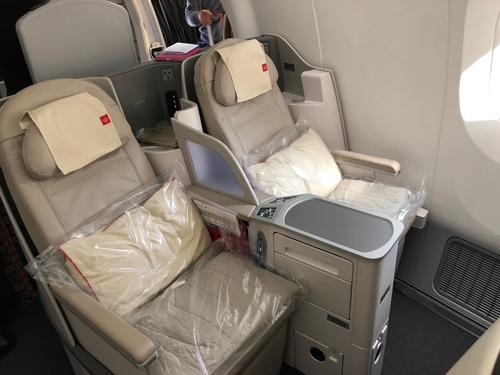 Below is a picture of a a middle pair.

Because I was on a day flight, it wasn’t clear how good the privacy is if you are sleeping or simply don’t want to be so close to your seatmate.  You are sharing a drinks tray as you can see. 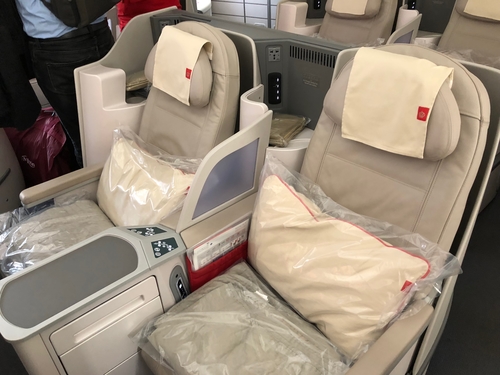 Here’s another view looking down the cabin from the front (RJ has no First Class so Business Class occupies the first four rows): 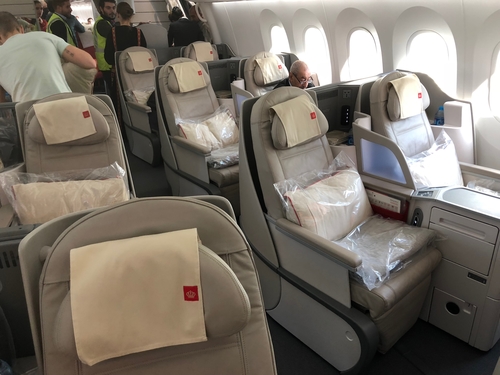 …. and from the other direction.  It is worth noting that the TV monitors are fixed in position, attached to the back of the seat in front, and cannot be moved.  They are a decent size however. 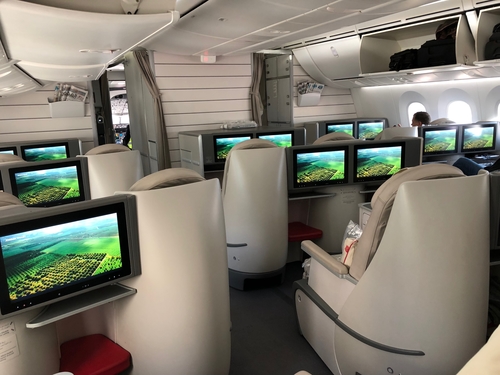 This is one aspect of the Royal Jordanian business class seat that seems to annoy people.  The footstools are tiny – not so much in terms of height but in width.  I also found them hard.

Because I was on a day flight and only stretched my feet out occasionally it didn’t cause me any inconvenience but it could get more frustrating on an overnight flight. 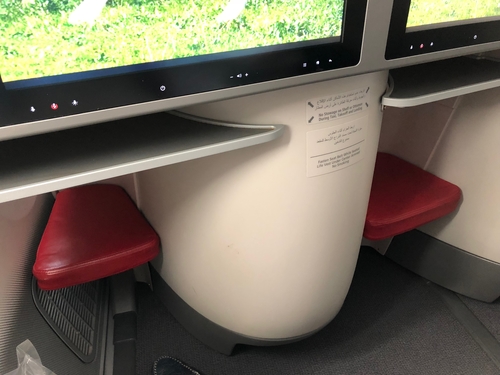 In terms of power sockets, you’re sorted.  As well as a UK plug there is a USB socket. 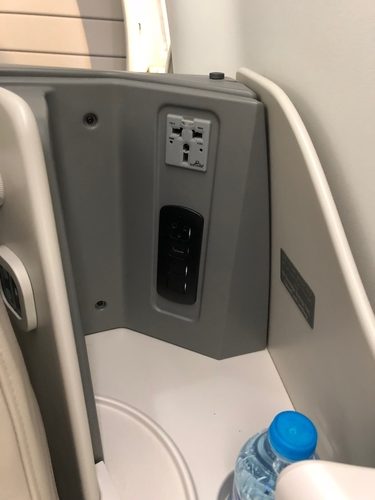 The IFE, to be honest, was definitely the low spot of the flight.

It didn’t help that one side of my headphones was broken, with no sound coming out.  It didn’t really matter in the end as there were a grand total of 11 English language films on the system.  Kingsman was the token recent release, with classics such as Die Hard making up the balance.  I was really struggling to find something worth watching.

(I don’t normally watch much IFE as regular readers know, but my inability to get hold of any same-day English language newspapers in the airport or lounge in Amman had left me a little low on reading material.)

There was also a compulsory – or it seemed compulsory – five minute ‘TV preview’ video which played before I could select anything to watch.  It wasn’t fun.

A decent pillow and blanket were provided.  There were no pyjamas but that is hardly surprising for a day flight in business class.

I did get a modest toiletry bag containing socks, eye shade, ear plugs, mouth wash, comb, lip balm, body lotion and toothbrush.  The only recognisable branding was on the Colgate toothpaste.

Royal Jordanian did a good job with their meal service, which I would describe as ‘solid’.  It is certainly a step above Club World.

I haven’t had the chance to try the British Airways Club World trolley service yet, but Royal Jordanian operates in the same way and it works well.  A trolley service only makes sense if the airline is happy for you to mix and match the various foods on offer and RJ was happy to oblige.

The silver foil trays are not the classiest but it presumably keeps the food warm if it came out of the oven that way. 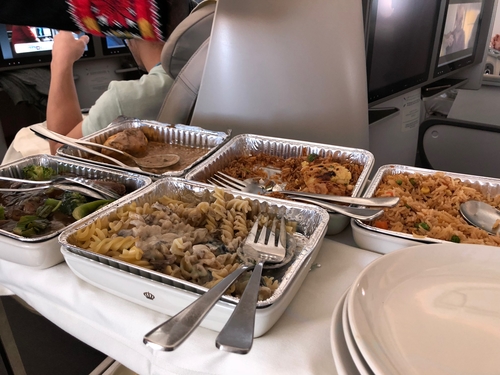 The appetiser was simply described on the menu as “a choice of appetisers” with a mixed salad.  I went for a fish based selection: 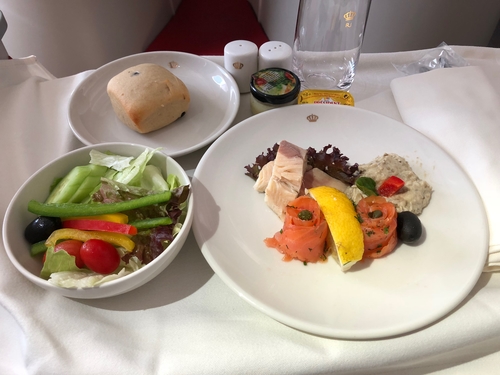 The official main choices were:

In reality you picked the core items you wanted and then added your choice of vegetables, potatoes and rice, which is how I ended up with this rather carb-heavy dish! 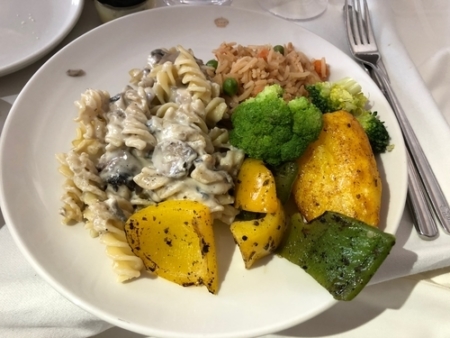 I skipped desert, but you were able to help yourself to “a selection of gateaux” from the trolley.  Ice cream was also available.

The wine list consisted of Taittinger Brut Reserve champagne, three white wines (including a Sauvignon Blanc from Jordan) and three red wines (including a shiraz from Jordan).  There were also a couple of beers and a selection of mid-range spirits, eg Chivas Regal 12 years and Johnnie Walker Black.  Gin lovers are restricted to Gordon’s ……

Here is a short (1 minute) video of the flight.  You can subscribe to our YouTube channel via this page – this is the same link to visit if the video does not automatically appear below.

And that was that.  It is a relatively short flight (five hours) from Amman to Heathrow and it didn’t seem long before we were landing in Terminal 3.

Royal Jordanian – based on my short day flight – appears to be a perfectly sound mid-tier business class carrier.  You get a brand new Boeing 787 aircraft and a 2 x 2 x 2 seating layout which is ideal for couples albeit less good for solo travellers.

The ability to earn Avios and British Airways Executive Club tier points means that Royal Jordanian is well worth considering to Jordan.  There is certainly no reason to pick BA apart from the earlier departure time out of Heathrow.  Using Heathrow Terminal 3 also means that you can visit the excellent Cathay Pacific and Qantas lounges.

If you are flying beyond Jordan, adding an extra leg would earn you additional tier points compared to flying BA.  Royal Jordanian does occasionally have attractive business class fares to Bangkok from Heathrow.

I am also happy to recommend them if you are looking for an alternative Avios route to or from the Middle East or Asia.  You cannot use a British Airways American Express 2-4-1 voucher, and there are no ‘off peak’ dates when redeeming on BA partners, but if that is not a problem then they are certainly worth a look.