Reader Alan sent us a review of the new Pearl Lounge for British Airways passengers at Marrakech Menara Airport.

Whilst we don’t normally run reviews of overseas lounges, especially contract ones, Marrakech has had a terrible reputation for the quality of its lounges.  We thought it was worth telling you that things have changed, at least for British Airways flyers, since the new Pearl Lounge opened in December 2017.

If you don’t have British Airways status, you can also access this lounge with a Priority Pass (free with American Express Platinum or you can buy one here) or a Lounge Club card (two free visits with the free American Express Gold).  You can also prebook for cash in advance via Lounge Pass.

“Having read numerous very poor reviews online about the lounge used by British Airways at Marrakech with comments such as ‘don’t bother’ etc, I wondered if it was even worth trying to find the lounge before our BA flight back to London Gatwick, particularly as the airport is modern and has all the usual eateries that one would want. However, I was pleasantly surprised.

British Airways now uses the new Pearl Lounge which appears to also be a pay to use lounge given that we were approached by a very nice lady at the top of the escalator trying to sell us access. However, the lounge only had 20 or so people in it and the staff confirmed that everyone in the lounge was on the BA flight, so I could only deduce that no one wanted to pay for access? 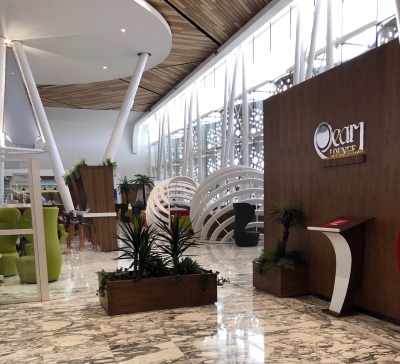 We were flying Club Europe and had been given vouchers at check in, but even with these access was granted only after much typing into the PC, albeit the staff were very polite and indeed helpful. I could not fault them at all.

The Pearl Lounge is very bright, airy and has a funky feel about it. There were the usual PC workstations, smoking room, various different seating options and some rather nice booths with loungers with individual TV’s albeit no controls to use them. The toilets were also very clean. 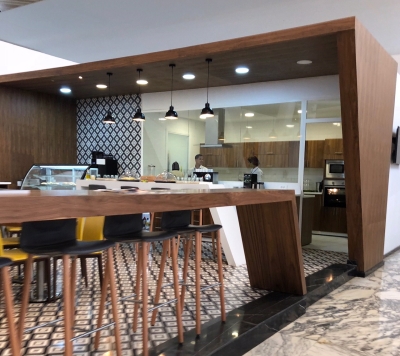 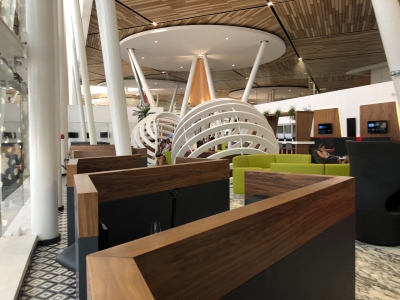 The ‘Lounger Pods’ were very nice, private and offered views of the aircraft stands and runway. 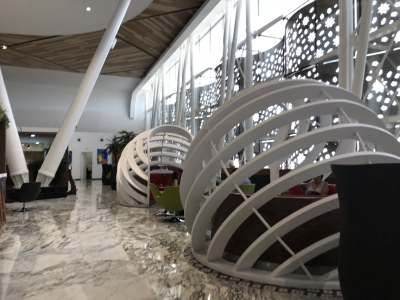 Now to the downside.  The food offer was limited to three hot dishes, nothing exciting and a few pastries and nibbles and that was it.

Coffee and tea were dispensed by a member of staff from behind a counter, as was the alcohol which comprised of only one bottle of red, one bottle of white and three bottles of spirits in a very small fridge. Given that they kept the wine glasses in a separate kitchen area I did not feel comfortable to ask for a second glass, as I feared a refusal might be offered.” 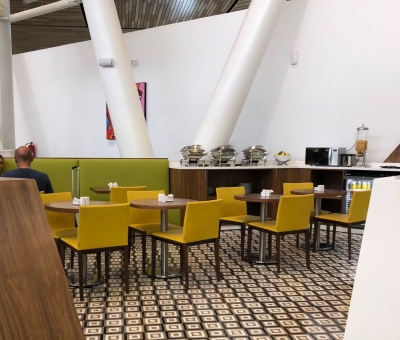 Overall, I would recommend this lounge.  It was a pleasant hour to pass before the flight.

The only real issue I had was that the flight departure board was outside the lounge and the announcements were only made in the main hall, which meant it was impossible to hear a word.

One further word of warning. We arrived two hours before our flight and had no problems, but I suspect that given the school holidays had just started and more visitors were arriving and than leaving Marrakech, the lounge will probably busy in the weeks to come.

Security at the airport is very tight starting with showing passports and scanning luggage even before entering the terminal building and there were numerous further inspections of passports, scanning of bags, luggage searches etc. I honestly lost count of how many times we were searched. I don’t have a problem with this, but suspect that during busy times it could take more than two hours to get airside. My advice is to allow plenty of time.”

Thanks Alan.  If you want to pay to visit the new Pearl Lounge at Marrakech Airport, you can book via Lounge Pass.

You also get access to Plaza Premium, Delta and Eurostar lounges. The card has a sign-up bonus of 60,000 points which is a special offer running to 2nd November 2021.  Our American Express Platinum review is here. You can apply here.

There is no annual fee for Amex Gold in Year 1 and a special 30,000 points sign-up bonus until 9th November 2021.  Full details are in our American Express Preferred Rewards Gold review here.