This is my review of the American Airlines First Class lounge at London Heathrow Terminal 3.

I started in British Airways Galleries First in Terminal 3 which I reviewed yesterday.  After an hour there, I decided to try the other Terminal 3 lounge I had never visited – the American Airlines First Class lounge.  I have been in the main Admirals Club business class lounge before which I reviewed here.

American Airlines is currently in the process of dramatically upgrading its main First Class lounges as Flagship Lounges as we wrote here.  The initial openings have had an excellent response and London Heathrow is on the list for refurbishment.  Frankly, it can’t come quickly enough.

If you travelling First Class on a oneworld carrier or have a British Airways Gold card, there is NO sensible reason to use any lounge except the Cathay Pacific First Class lounge.  It was only out of duty to HFP readers that I spent my afternoon in BA Galleries First and the AA First Class Lounge.  You don’t need to do this.

As Anika also found when she flew Delta recently to Atlanta (review coming up) US airlines now impose an additional layer of security screening on their passengers.  You are required to have a face-to-face interview with an accredited agent before boarding.

As I was travelling without checked baggage and used online check-in, the first AA employee I encountered was the lounge receptionist.  It appears that she is accredited to do these interviews, which also explained the queue I found when I came into reception.

After an utterly pointless discussion where she checked that I knew my own name and asked me questions that she could never verify about my job, she put the required stamp on my boarding pass and let me in.  Had I not gone to the AA lounge, I would presumably have had to go through a similar process at the gate.

I’m not entirely sure of the entry requirements for the First Class lounge.  I am guessing, given how quiet it was, that you require either a First Class ticket or a British Airways Gold card or equivalent.  A Business Class ticket on its own is presumably not enough.

Inside the American Airlines First Class Lounge at Heathrow Terminal 3

All you need to know is that it looks like an old people’s home. I kept expecting someone to start a game of bingo.  But, no, it was apparently an exclusive airport lounge for AA’s top customers. 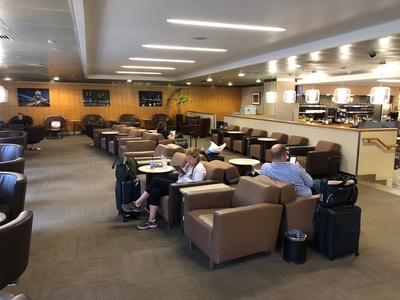 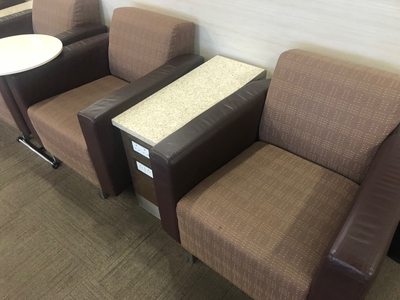 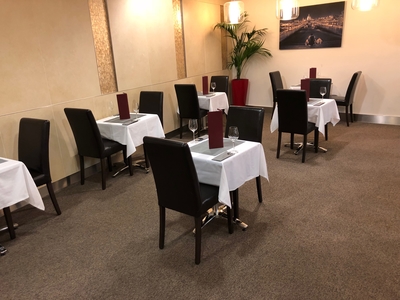 I also recommend close inspection of the artificial ceiling and lighting in the other pictures below.

It’s not all bad.  The drink selection was OK, albeit worse than in Galleries First.  The alcohol was also free which would not have been the case if this was a US lounge: 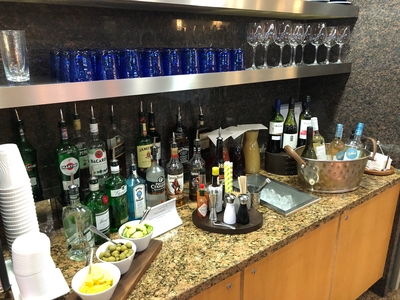 There was a man standing by the entrance – which was a long way from the bar – guarding two bottle of Moet champagne.  I am guessing that he would have poured me a glass if I’d asked but it was clear they didn’t want to take the risk of letting you pour your own.

The dining area, as you can see from the photo above, had not a single person eating.  They had probably all seen the menu and walked off as I did.  There were no appetisers, three mains – teriyaki pork belly, wasabi crab cake, butternut puree – and only one desert, pumpkin pie with buttermilk custard.  I decided to pass. I certainly wasn’t hungry enough to sit, on my own, in an empty restaurant in full view of everyone else in the lounge.

The buffet, on the other hand, was quite impressive with a good mix of salads, wraps and some hot items.  It was good to see something different from British Airways lounge food, which rarely changes from year to year: 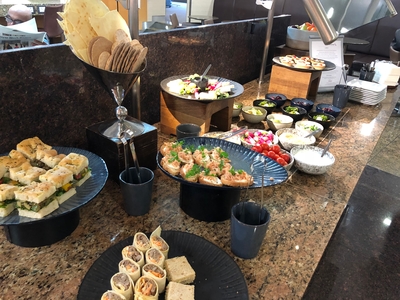 …. plus the usual nutrition-free snacks you always find in US airline lounges:

There’s little else to add.  There is an uninspiring work area: 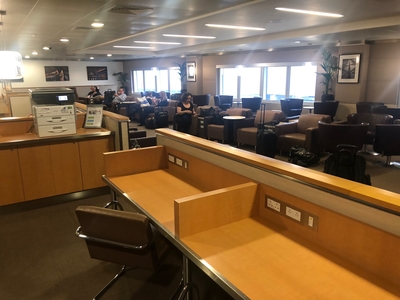 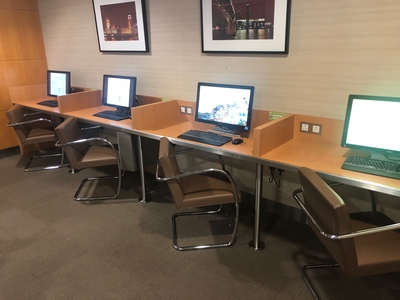 ….. but, frankly, nothing to detain to you for long.

If this was, say, the lounge at Doncaster Sheffield Airport (which we have actually reviewed) then I would have said it was above average.  As a First Class lounge of a major international carrier, it falls well short.  The refurbishment cannot come soon enough.

I decided to head down to my American Airlines Boeing 777, board first and get some photographs of my business class seat.  That’s when things started to improve rapidly.