Every November, the British Airways parent company, IAG, gives a presentation to the City about the state of the business and its plans for the future.

The 2018 version can be seen here.  You need to click on ‘IAG Presentations’ at the top and then download the very chunky PDF document.

This presentation is normally the source of some good inside information about the future direction of the group.  This year ….. not so much.  There is virtually nothing in the document which is not already in the public domain in terms of product development and the whole tone is less bullish than in previous years.  There was one interesting titbit in the discussion afterwards – that the A350 fleet to be delivered from next year will not have First Class.

The opening slides give an interesting insight into the current state of the European aviation industry and are worth a read for anyone with a general interest in the sector.

Slide 25 shows that, despite the cost reduction claims, unit costs across IAG are higher today than they were in 2015.

Slides 31-33 are an interesting view on how IAG sees brand segmentation and about the different sorts of customer groups it has.  Only 52% of short haul tickets and 30% of long haul tickets are bought primarily on the basis of price – although you may question from that why so many service cuts were made (and reversed) in recent years.  With 31% of long-haul tickets bought primarily on the basis of the ‘brand’, the bad publicity BA has had in recent years must have had a serious impact on the bottom line.

(2018 is the 2nd year running that the ‘Net Promoter Score’ for British Airways has not been published in this presentation.  NPS is the key IAG internal metric used to judge customer satisfaction, and in simple terms is the gap between the % of customers who would recommend you and the % that would not.)

Slide 35 shows British Airways performing badly compared to the market leader in each customer segment. Emirates is preferred to BA for business class travel, both for leisure and work, for example, whilst Ryanair is preferred to BA by people wanting only cheap seats.  More worryingly, easyJet and Lufthansa are preferred to BA by non-Business Class customers who are willing to focus on more than price.

Slide 39 seems to be saying, basically, what we have been saying for years – BA should stop trying to be ‘everything for everyone’, abandon the race to the bottom and give up the segment of the market which competes solely on price.  Other ‘value’ IAG brands – LEVEL, Aer Lingus etc – will pick this business up.

I will skip over the Aer Lingus and Iberia sections, but it would be unfair not to say that IAG has done a fantastic job with both of these airlines since they were acquired.  Iberia, especially, was a total shambles when it joined IAG and is now transformed in virtually every respect – a new fleet, new seats, a new visual identity and new routes.  Both Iberia and Aer Lingus now have superior business class products to British Airways. 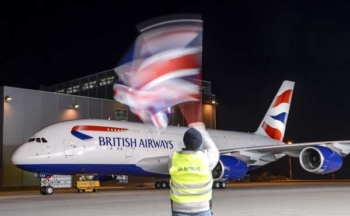 Let’s move on to the British Airways section:

Slide 110 – despite taking on substantial extra capacity at Gatwick last year via the Monarch slots, BA did not need to cut prices to fill the extra seats

Slide 113 is the key one if you are looking for information on the new Club World seat:

The seat will feature a fixed TV screen.  This could imply that BA is going to use the current Iberia seat – which I like, except for the fact that the TV does not fold away and is stuck in front of your face for the entire flight!  We know this because the slide promises ‘gate to gate’ IFE and this would not be possible if the screen popped out like the current one, as it would need to be folded away for take off and landing.

“A larger seat, direct aisle access, greater privacy and increased stowage” could all apply to the current Iberia seat

According to reports elsewhere (I was not on the call myself), it was stated verbally that there will not be a First Class cabin on the new A350 fleet.  This means that you are unlikely to see the new Club World seat on the New York route because that historically has First Class – so no A350 – on the Heathrow services.

There is an implication that the size of the economy cabin will be smaller, with bigger cabins elsewhere.  This fits with the earlier slides which implied that British Airways will, in the future, be happy to abandon those customers who buy only on price.

Food and drink will improved in ‘key’ lounges

There will be (slide 115) ‘increased flexibility for top tier customers’ which implies an end to the ‘computer says No’ approach.  Let’s see if a BA Gold sitting in Club Europe will be allowed to get something from the Euro Traveller food selection though …..

Finally, slide 121 reminds us that British Airways will be 100 years old in 2019 and we can expect some special events to celebrate.

If you’re interested in travel technology, the final section on IAG Digital is worth a look.

Avios is notable by its absence.  There is usually a special chunk in this presentation devoted to it …. but nothing this year.

All in all, if you have a bit of spare time this Saturday then the whole presentation is worth a read.  You will learn some interesting stuff about European aviation and new developments in travel technology even if there isn’t much new to discover about British Airways (and nothing at all about Avios).