This is our review of the Malaysia Airlines Golden Lounge in the international Satellite Terminal in Kuala Lumpur, which reopened in March 2018 following refurbishment.

Rob says: It is part of Jamie’s series of reports from his trip to Indonesia, flying on various oneworld airlines in Business Class using Avios tickets.  His review of the British Airways Galleries Club South lounge at Heathrow is here and his review of his British Airways Club World flight to Kuala Lumpur on a Boeing 787 is here.

I was happy to run this article and the forthcoming flight review as we have never given Malaysia Airlines the coverage it probably deserves as a British Airways partner.  The Head for Points bucket list includes Malaysia Airlines business class from Heathrow and a visit to their lounge in Heathrow Terminal 4.

You can find out more about the Golden Lounge on this page of the Malaysia Airlines website.

“Having just arrived in Kuala Lumpur from London, I had a couple of hours in transit before my connecting Malaysia Airlines flight to Jakarta.

Malaysia Airlines has several lounges at Kuala Lumpur airport, situated in both the domestic and international terminals.

I landed at the international terminal satellite building which houses the flagship Golden Lounge. This is a brand new facility which only (re) opened in March 2018.  This is the lounge you are most likely to be using unless you are taking a domestic flight.  It was too good an opportunity to miss and gave me a direct comparison with the British Airways Galleries South lounge I experienced around thirteen hours earlier.

Here are the access rules for the Golden Lounge, courtesy of Australian Business Traveller:

It also appeared that any Malaysia Airlines passenger could purchase access for 270 Ringgit.

If you are flying in First Class, there is a separate area with an a la carte dining room.

After disembarking I proceeded to find my way there which took about ten minutes. Signage was poor, however, and I felt like I was wandering around unnecessarily for some of that time. I did have a quick stop off to admire the jungle boardwalk, a mini living rainforest centrally located in the terminal within a domed greenhouse.  As you do. 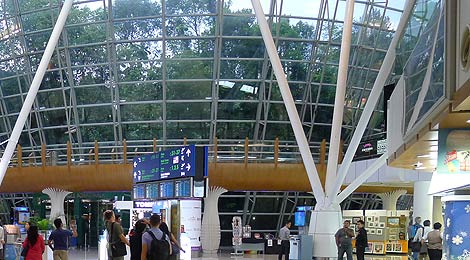 And of course there is an indoor waterfall too (library picture as mine did not come out well): 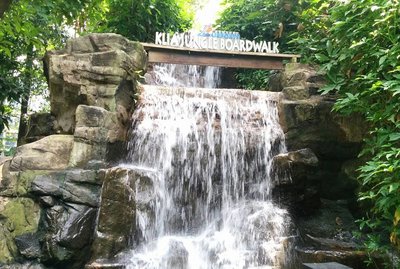 The lounge is situated on the upper mezzanine floor (level 2) above the terminal transit train.  There are many other airline lounges on this level but is by far the biggest according to the airport map.  It is reportedly 4,000 square metres in total, including the First Class area. 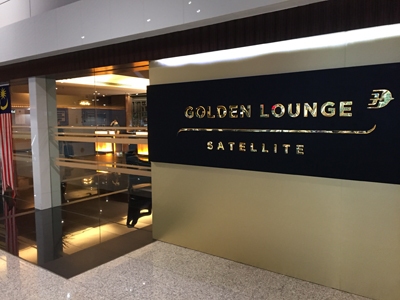 The entrance reception was impressive. It had a classy timeless feel to it.  Modern and stylish – not surprising, given that it has only been open a few months – with warm Asian decor.  It was flawlessly clean, spacious, and welcoming.

Once through, there was a short corridor adorned with Asian artifacts leading to the lounge itself. 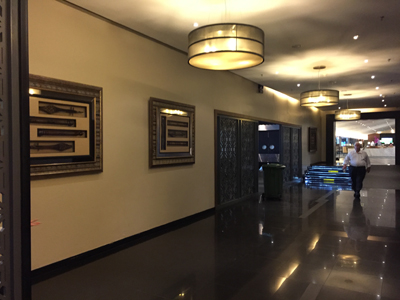 On the left before entering the main space was a bar. This was the only place to get an alcoholic drink as far as I could see. I only actually noticed this bar on the way out and by then I had a flight to catch so didn’t make use of it. Up until that point I’d assumed the lounge was alcohol free like many in this part of the world. 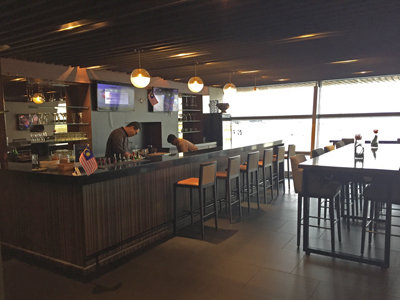 The main space itself was spacious and bright. It felt crisp and clean. It was also surprisingly quiet for 4.30pm on a Monday afternoon. There were no more than a handful of guests around the whole time I was there. 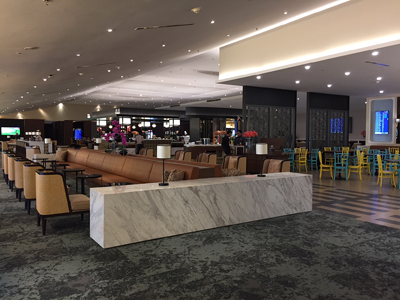 There were windows along the left side of the lounge providing plenty of natural light and views of the airport. I chose a comfy chair on this side to relax in. 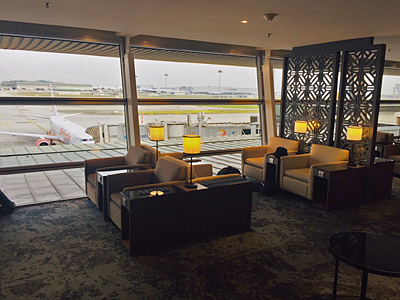 There was no shortage of seating to suit your needs, whether working, eating or relaxing.

The lounge was square with various areas of seating around each side. There were some nice private pockets and also some wall length tables suited for working. Most areas seemed to have charging points close by with multi plug sockets. Some areas also included direct USB charge points. At first it did seem like sockets were lacking but a closer look revealed some were located at ankle level and some were integrated into the floor under seating. 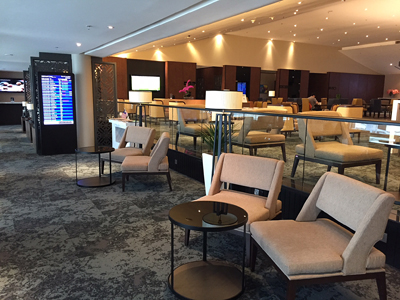 There were plenty of flight information screens around. No flight announcements were made which added to the peaceful atmosphere.

There was a family room with a dedicated TV. 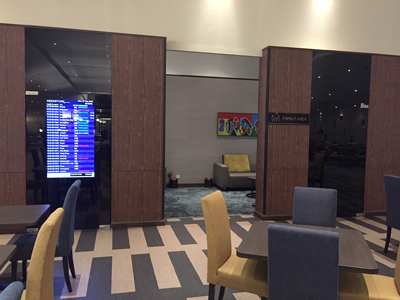 A large television in one corner was playing a replay of that weekends Arsenal Premiership game, which luckily are slightly less painful to watch at the moment!

There were also male and female sleeping areas where you could relax on a lounger. 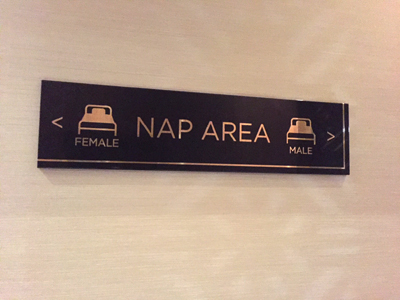 Showers were available and looked nice and well maintained: 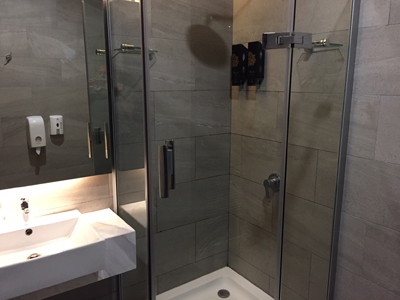 Yesterday’s British newspapers were available (Sunday Times / Sunday Telegraph) which was impressive, along with other English language titles. All the magazines were of Malaysian origin. 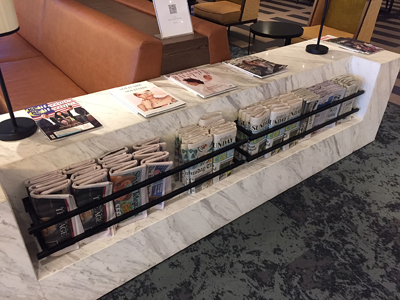 Wifi was available but I did have some trouble initially logging in on my iPhone. Once it was working I had to log back in quite often which was irritating. The internet speed was fine, however.

I’d eaten on-board not long before my flight arrived so wasn’t feeling at all hungry. This was frustrating because the cooked breakfast on my British Airways Club World flight was poor and the food offering here looked really impressive. Sadly, my lack of appetite means I can’t vouch for the quality of any of the food here as I didn’t try it.

On the right as you enter the lounge was a noodle bar, designed in a simple cafe style. 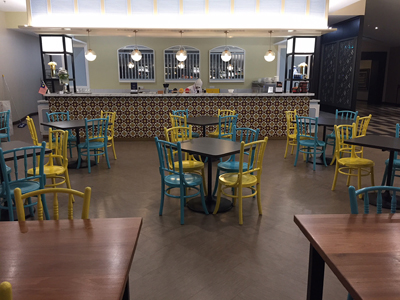 I liked the fact it had a different look to the rest of the lounge and meant you could eat here before retiring to one of the more laid back sections. It created more of an experience than just sitting in a lounge. Three freshly made noodle dishes were served here – Nyonya Curry, Laksa and Won Ton noodles with vegetables or chicken dumpling.

If Asian noodles are not your first choice, there was also a central food station where chefs prepared the other options. 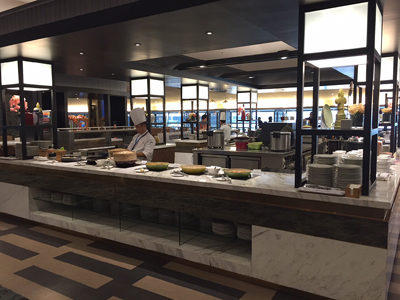 There were made to order sandwiches – grilled cheese and tomato on panini, grilled spicy tuna on rye bread and a potato and curried pea wrap. Several pasta dishes were also available.  Potato samosas, potato curry puffs, chicken dim sum, vegetable curry and pasta with mushrooms formed one side of the self service hot buffet. 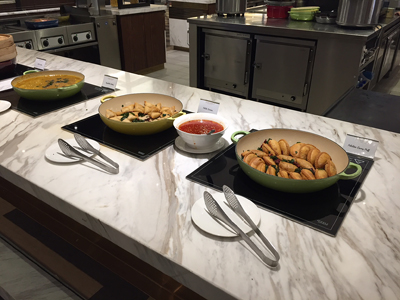 Chickpea soup and bread rolls were located next door. This is the salad and fresh fruit bar: 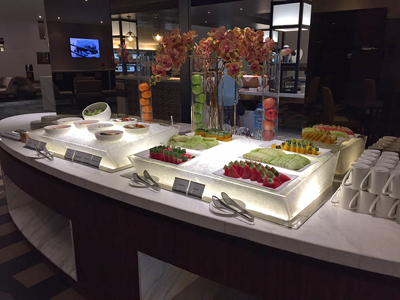 I couldn’t help but think back to the sad looking salad offering in the British Airways Galleries South lounge. The quality of presentation here far outdid anything available back at Heathrow.

A limited variety of carbonated soft drinks was available. 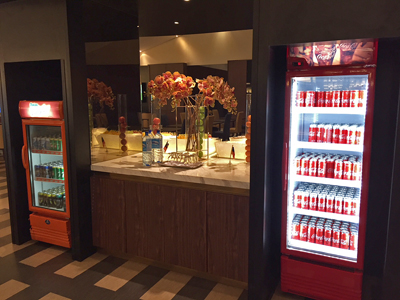 Pineapple and mint water and ice lemon tea could also be found on a separate table next to a small selection of mini desserts. 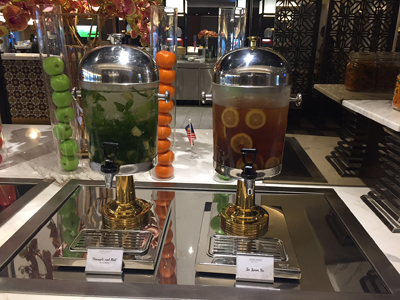 Hot drinks were available from a counter at the central galley. I’m not sure what kind of coffee they served as I had a green tea (and a biscuit).

There were numerous smartly dressed staff throughout the lounge. The ones I encountered I found to be courteous, professional and welcoming.

Overall I was very impressed with the Malaysia Airlines Golden Lounge in Kuala Lumpur. It was modern, nicely designed and spacious. It was well lit and the atmosphere was calm and relaxing, perfect for resting or working.  Quite the opposite of Galleries South.

The food offering was outstanding and looked high quality. This is especially true considering what British Airways has available to eat at 4.30pm in the Galleries lounge. The difference is glaring.

The lounge was also spotlessly clean. Yes, it was very quiet in there but I can’t imagine the staff allowing this standard to drop when busy. There was an air of pride about the staff and they clearly wanted to make you feel special during your visit. It worked for me and I would not hesitate to head back there if the opportunity arose.

That being said, I wouldn’t pay to gain entry as I think £50 is too much for any lounge unless you are hoping to use the nap area.  If you have oneworld status or a business class ticket it is well worth arranging your schedule so you can spend some time here.

You can find out more on the Golden Lounge page of the airline website which is here.