Last week we got a peek inside the IHG’s new Hotel Indigo Manchester Victoria Station.  This is in the northern part of the city centre and just opposite the new Amazon HQ.  It’s so new, it isn’t even open yet.

I was in Manchester to take a look at the new Crowne Plaza and Staybridge Suites properties which have just opened – those reviews will follow in a few days.  We also asked IHG if I could have a hard-hat tour of the new Hotel Indigo and they generously agreed.

Final touches are still being made for a planned opening sometime this week – touch wood – but the hotel already feels very finished. With all the contractors, IHG staff and hotel management bustling around it certainly felt like a real hotel! You can see some last minute touches being added to the front desk here: 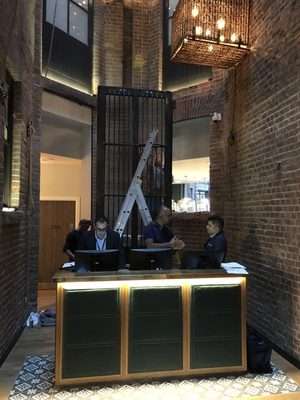 …… and the beautiful lobby-atrium with these lovely basket lights: 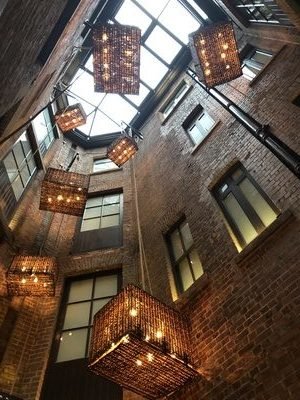 Like all Hotel Indigo properties, the concept for the interior design is taken from the surrounding area.  Since Manchester was a hotspot for industrialisation during the 19th century, this hotel takes its cues from tea, printing (think the Manchester Guardian, as was) and cotton production. Floors are alternately themed, as you can see when you compare the interior of the rooms.

I didn’t get a photo of a ‘printing press’ room but here are the tea and cotton room themes: 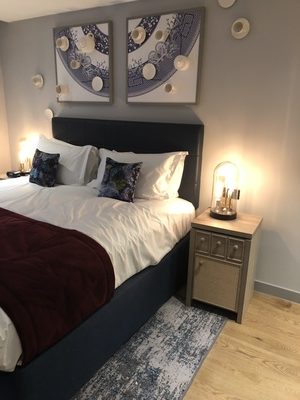 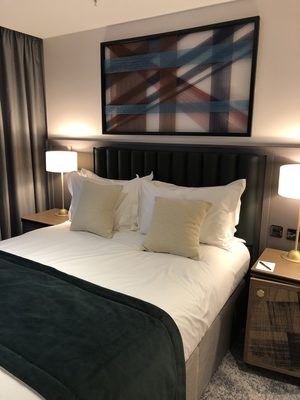 And a bathroom, featuring me: 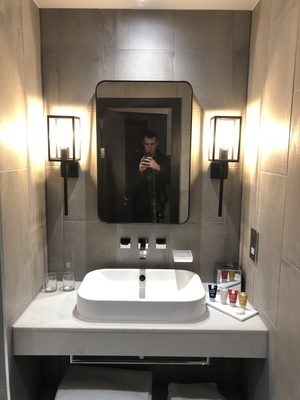 The new-build portion of the hotel, called the rotunda, has penthouse suites on the top floor with some excellent views over the city centre: 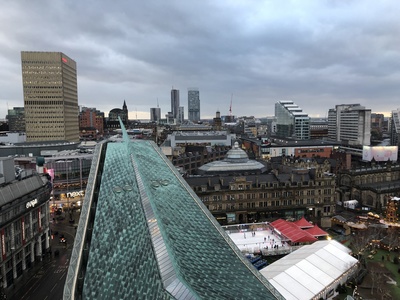 The industrial chic vibe is particularly evident in the hotel restaurant, which looks great and offers a range of seating options: 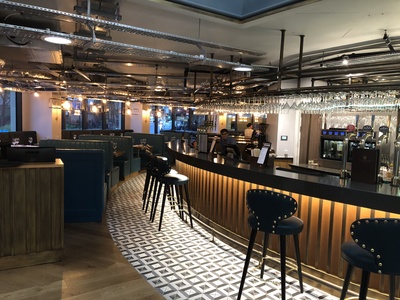 The cafe serves its own Indigo tea, locally produced. I am told they are trying to source as many items as possible locally, including the toiletries in the rooms which come from just outside York.

The hotel also has a small gym with a couple of running machines, a bench press etc.

It’s the location that really sells the Hotel Indigo Manchester Victoria Station, together with what looks like an excellent restaurant, bar and cafe. The hotel, next door to Victoria rail station and on the edge of the bohemian Northern Quarter is very close to Selfridges, Harvey Nichols and the ‘upscale’ side of the city centre.

The rooms themselves are generally on the smaller side and it will be interesting to see how they wear.  They are more boutique-y but slightly less premium than the new Crowne Plaza, as you’ll see from my review in a few days, and will probably attract a younger and more leisure-oriented customer.

The hotel is hoping to open in the next few days. Room rates for mid-week dates are around £135 or 30,000 IHG Rewards Club points.  The points value, at least midweek, is slightly above Rob’s target valuation of 0.4p.  You can see more about the hotel on the IHG website here.

Thanks to IHG and the Indigo team for letting me interrupt their busy construction schedule.

Get bonus points: The current IHG Rewards promotion is ‘Triple Your Points’ – our full article is here. It runs from 15th May to 16th August. You receive double base points on your second stay and triple base points on your third and subsequent stays. You can register on this page of ihg.com.

New to IHG Rewards?  Read our two-part overview of IHG Rewards here and here and our article on expiry rules here.