This is Part 2 of Jamie’s review of Qatar Airways business class on a Boeing 787-8, flying from Doha to London Gatwick.

Part 1 of my Qatar Airways Boeing 787 business class review, which mainly covers the seat, can be found here.

After take off I was given food and beverage menus. The beverage menu was exactly the same as on the earlier B777-300 flight.  The wine list comprised of: 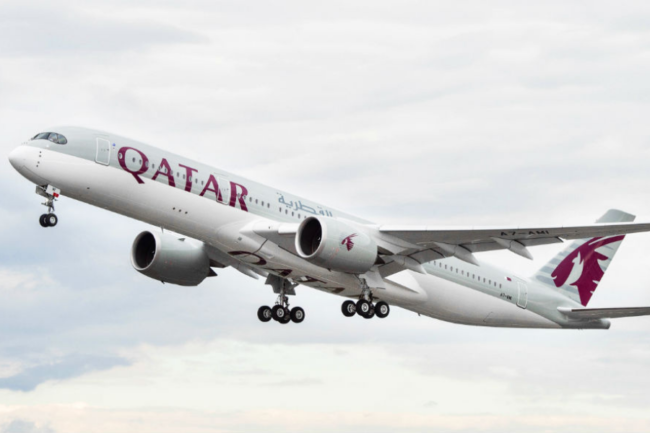 Two champagnes – Pommery Brut Royal (£38 per bottle) and Ataïr Etoile Rosé ($27, unavailable in the UK at the time of looking)

Eight cocktails were also on the menu including an old fashioned, buck’s fizz and a screwdriver. Five mocktails and a non alcoholic bubbly called So Jennie were available too. I decided to try something and went for a pink gin, a mixture of Bombay Sapphire, Angostura bitters and lemon. It looked nice but I must confess it was too strong for me so I added a mixer and turned it into a fancy gin and tonic. This was perfectly complimented by a delicious dish of warm peanuts, almonds and cashew nuts. Content was my middle name right now. 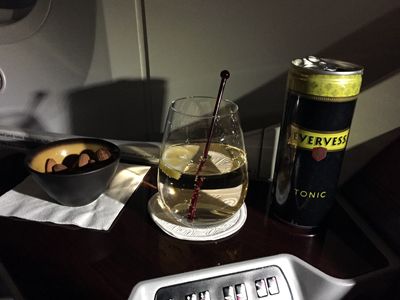 I wasn’t feeling hungry but the flight attendant was keen to take my order for refreshments, both for now and breakfast. There was a light dining selection including soup of the day, steak sandwich and cheese and crackers. I passed on these and went straight for dessert – sticky toffee pudding with caramel sauce and dates. When asked, I requested it to be served in about an hour. I also placed my order for breakfast.

Here is dessert half an hour-ish later: 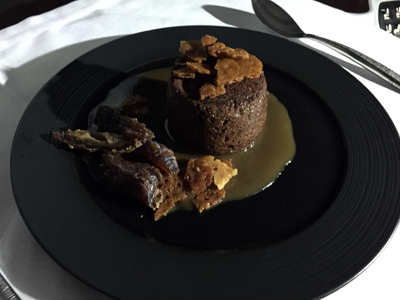 It was fantastic, on a par if not better than many good restaurants. I thought the stylish serving plate enhanced it too.

Looking at the IFE, it was the same Oryx One system as I had on the 777 flight and contained similar content.

There was a huge choice of entertainment to watch, listen and play with over 3,000 hours available. There were several hundred films including around 70 new releases such as The Seagull, Solo and Deadpool 2. Many were Arabic or Bollywood but it still left more than enough to keep you occupied.

There was no shortage of TV programmes either with some available in series box sets. You could watch everything from Red Dwarf to Howards End to Gotham. This time I tuned in to the new Zach Braff comedy called Alex, Inc. Its no Scrubs but enjoyable all the same. If you were feeling in need of some mental stimulation there were also over one hundred TED talks to pick from.

The excellent screen looked the same, a bright and sharp 17′ display. The only difference came in the shape of the remote control. On this plane, it featured a small touch screen which I was quite excited about at first. 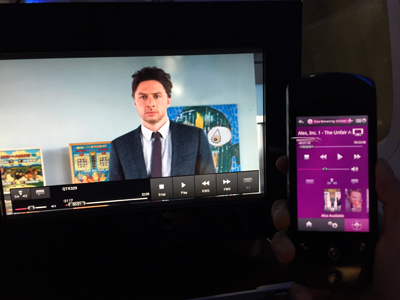 However my excitement soon turned to frustration. It was slow, fiddly and regularly unresponsive. I decided I’d prefer to peruse the media content directly on the large IFE display which is also a touchscreen. To do this I needed to change the settings using the handheld remote. I tried this several times but failed to get anywhere so asked my attendant for assistance. He spent several unsuccessful minutes trying to work it out but also didn’t manage to.  He suggested rebooting the system but I told him not to worry, I wasn’t planning on watching too much anyway.

Wifi was accessible on this plane and I received 8 MB free of charge to use within half an hour. I used this to send Whatsapp messages and several photographs so the data was gone in no time. The internet speed was surprisingly good, I’d say almost 4G quality.

Three packages were available to purchase:

I didn’t think the prices were unreasonable compared to other airlines but I didn’t bother purchasing anything. Besides, I wanted to get some sleep…

I enjoyed wearing the pyjamas on the first leg and this was no different. The attendant had dropped off a bag containing the same White Company pyjamas and slippers in my assumed size. He then happily and quickly swapped them for the correct size following my request! 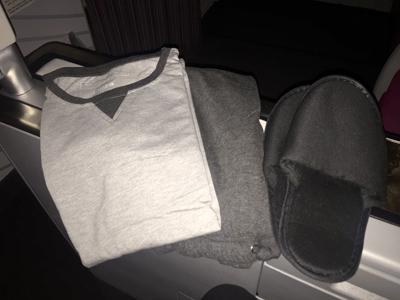 I changed in one of the very well maintained bathrooms. Again they had Rituals hand wash, lotion and body mist to use along with toothbrushes and shaving kits. 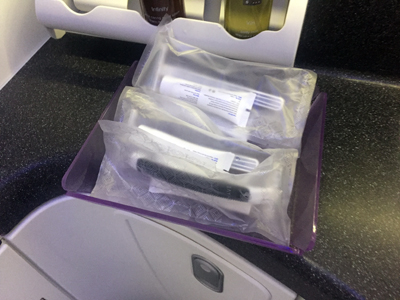 One simple thing that did impress me was the non contact toilet flush. I don’t think I’ve seen one on a plane before. 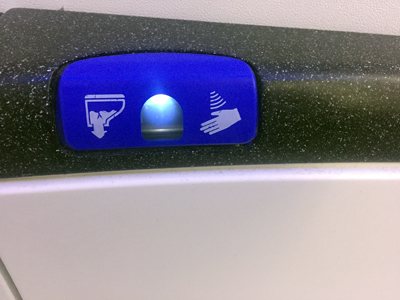 Before returning to my seat, I had a look at the snack counter located just behind row five seating. 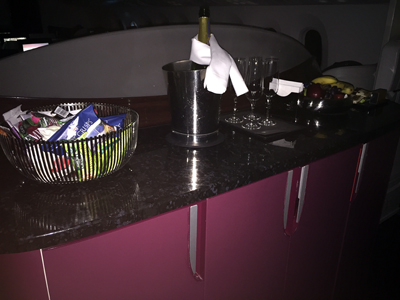 I really like it when airlines provide a space such as this. It may not be as cool as the Upper Class bar on Virgin Atlantic but it still allows you the opportunity to stretch your legs and have a chat with friends or fellow passengers. Just keep the noise down on a night flight!

Snacks to choose from included crisps, popcorn, fruit and various chocolate bars. I continued with the sugar theme and helped myself to a bar of Lindt Hello Salted Caramel. This is officially my new favourite chocolate. There was also an open bottle of champagne and glasses.

Back at my seat, it was a very easy and swift process to turn it into a flat bed by pressing the ‘bed icon’ button on the right hand panel. 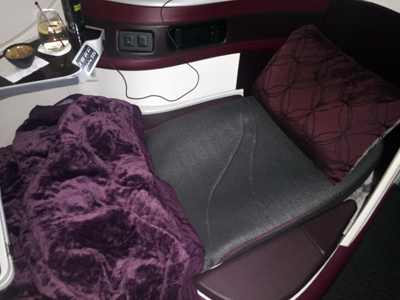 I was very pleased to see the armrests drop down, creating a wider area for your upper body. I unwrapped the quilt, a luxurious feeling thick velvety soft blanket and spread it across the bed. As I said in the earlier review, this was the nicest and most gratifying bedding I’ve ever experienced on a plane and gives an instant snug warmth. The pillow was also comfy and whilst I didn’t sleep as well as the other flights (probably due to a confused body clock), this was easily the comfiest bed of my three long haul journeys.

One thing I like about breakfast in business class is that they wait until you are awake and ready for it. There’s no attendant either waking you up or just missing you out as they serve it in economy. And so after maybe three hours light sleep I sorted myself out and prepared for breakfast. I’d ordered an energising fruit smoothie, steel-cut oats with berries and cream, a platter of seasonal cut fruits and a green tea (there was actually a choice of eleven different teas and five coffees!).

Here is the porridge oats. 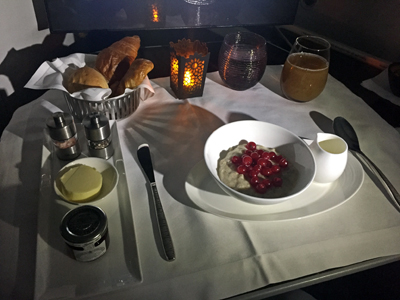 I think my attendant had a bit of a morning rush on as he looked a little harassed when he served the porridge. After he dashed off I realised he’d forgotten my spoon! Quickly resolved, I tucked in to delicious and light oats and the cream added a decadent touch. I was also served warm pastries with strawberry jam. I had a croissant which was fresh and crisp.

Next was the fruit platter: 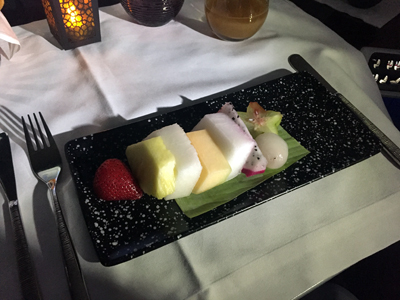 This was presented beautifully and consisted of a variety of no less than eight different fruits including exotic lychee, starfruit and dragonfruit. I was so impressed by this, all fresh and perfectly ripe.

Fifteen minutes after my plates had been cleared away I was still waiting for the green tea I’d ordered. However, a gentle reminder very quickly resolved this.

Not long before landing the attendant supervisor dropped by for a little chat, his second of the flight. I felt this was such a simple way of making you feel like you are a welcome and appreciated guest.

After ensuring I’d had a pleasant flight experience, he went on to explain about a technical aspect of the plane that was new to me. I was told the Boeing 787-8 causes less travel fatigue than other planes because the cabin is pressurised lower making more oxygen available to breathe. I really couldn’t tell if it had benefited me but it was good to know.

Looking back over my recent long haul flights – British Airways Club World Heathrow to Kuala Lumpur (reviewed here), Qatar Airways business class Bali to Doha (reviewed here) and this one, I enjoyed them all for the most part. But overall, this last leg on the Qatar Airways Boeing 787-8 was the most pleasurable.

It was my favourite seat for numerous reasons. The modern design was far superior with better storage and shelf space around it. It had a good deal of privacy and the bed was the most comfortable. The cabin as a whole felt open and the refreshment counter was a big positive.

The 17 inch IFE screen on both Qatar flights quite literally outshines BA’s 10.4′ offering although content is very good from both airlines. I rated the food very highly on this flight, as well as the previous Qatar flight. And whilst the food mainly wasn’t bad with BA, it is very far behind the quality provided by Qatar Airways.

There was one let down on this flight – the service, which was the worst of all four business class flights I undertook. They were generally only small issues but these end up standing out when you have recently experienced much better. Perhaps I just caught my attendant having a bad day but he was slow and disinterested for parts of the journey. That is not something that happened on any of my other flights and judging by my VIP treatment on the first Qatar Airways flight, it is not the standard they aspire to. There were significant differences in passenger levels between my Qatar flights but that should not be an excuse.

It would not put me off flying with Qatar Airways again. Quite the opposite in fact. I was still very impressed overall and having finally experienced their business product, I can totally understand why it is so highly regarded.

You can learn more this version of the Qatar Airways Boeing 787 business class seat on this 787 page of their website.