It seems that BA’s 100th birthday celebrations are in full swing, given the mysterious appearance of 2,019 Avios as a ‘birthday bonus’ in many accounts and the £100 seats promotion running this week.

British Airways also announced that a Boeing 747 is being repainted in the livery of the British Overseas Airways Corporation.  This is one of two airlines that merged in 1974 to create the current British Airways.

Here is a picture from 1971 of a very early Boeing 747 in BOAC livery (photo by Fox Photos/Hulton Archive/Getty Images): 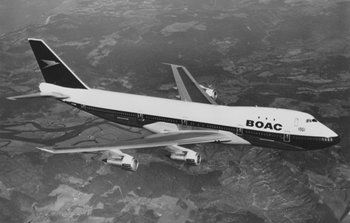 The aircraft, G-BYGC, is due to re-enter service on 18th February.  The plan is that it will retain the BOAC livery until the aircraft is retired in 2023.

Here are some drawings of what we will see (click to enlarge): 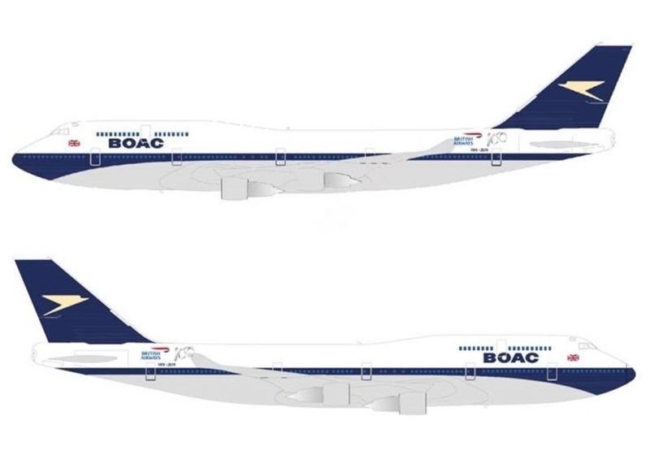 This is the old BOAC poster which hangs in the Head for Points office.  It is a genuine one – Antikbar on Kings Road usually has a few in stock if you want something similar. 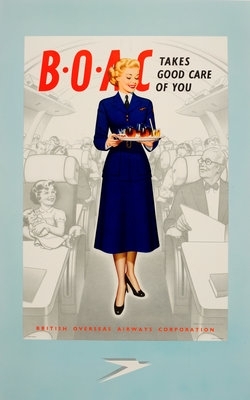 As you are going to be hearing a lot about the British Airways 100th anniversary this year, I thought it was worth running through a potted history of the airline.  This was sent over by the BA press office who take full responsibility for its accuracy:

Following a Government review, Imperial Airways and British Airways were nationalised in 1939 to form British Overseas Airways Corporation (BOAC). Continental European and domestic flights were flown by a new airline, British European Airways (BEA) from 1946. BOAC introduced services to New York in 1946, Japan in 1948, Chicago in 1954 and the west coast of the United States in 1957. BEA developed a domestic network to various points in the United Kingdom, including Belfast, Edinburgh, Glasgow and Manchester.

From 1946 until 1960, BOAC and BEA were the principal British operators of scheduled international passenger and cargo services – and they preserved Britain’s pioneering role in the industry. The 1950s saw the world enter the passenger jet era – led by BOAC, with the Comet flying to Johannesburg in 1952, halving the previous flight time.

Additional airlines began to pass into BEA’s ownership and in 1967, the Government recommended a holding board be responsible for BOAC and BEA, with the establishment of a second force airline, resulting in British Caledonian being born in 1970.

Two years later, the businesses of BOAC and BEA were combined under the newly formed British Airways Board, with the separate airlines coming together as British Airways in 1974.