I would normally have let this go by, but I thought it was an interesting addition to my review last Saturday of the drinks offered in Emirates First Class, including a £250 Haut Brion and £790 cognac.

In the FT last weekend, Jancis Robinson went on a bit of rant about British Airways wine.  She worked for the airline for many years as its chief wine consultant.  Whilst the FT article is behind a paywall, you can also read it on her blog here.  Here are a few quotes:

“In 2009 Willie Walsh, then head of BA, decided to abandon the policy of choosing wines on the basis of what they tasted like and instead, to cut costs, appointed a single exclusive supplier for each of the three classes. In 2010 I resigned.”

“Unfortunately, the wine selections on the two major airlines based in the UK, Virgin and British Airways, belie our nation’s standing as a major global force in wine. Virgin appeals much more effectively to the cocktail sipper than to the wine drinker, while the current state of wine buying at British Airways is described by one close trade observer as ‘at rock bottom – there’s only one way for them to go’. 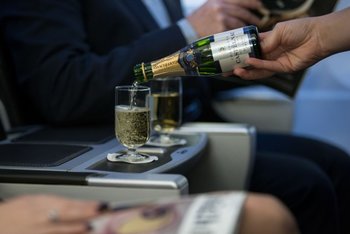 BA’s wine buying is currently in the hands of two young Frenchmen working for the parent company IAG who have no wine-buying experience. The dire state of their budget can be judged from a recent discussion on Flyertalk.com. The Villa Maria Sauvignon Blanc then on offer in BA First Class was spotted in Morrisons at £5 a bottle, two for £9. Even more recently an Argentine Malbec that retails for $10 was served in First Class. All submissions in a recent First Class tender for wines over €6 a bottle from the cellar door were rejected. (The budget for forward buying of claret used to be €25.)

The glass of champagne that welcomes anyone who has paid thousands for their seat at the front of a plane is seen as the most important wine served on any plane. Even BA realise this, and have not (yet) pared Laurent Perrier’s Grand Siècle from First Class – although one can only imagine the negotiations that keep it there. And they cunningly also offer a much cheaper champagne and, quite rightly, an English sparkling wine too, which presumably helps to reduce costs. Krug and Dom Pérignon are de rigueur for the Asian airlines, and Emirates have been known to offer the super-special, extra-aged Dom Pérignon P2. If you were really greedy you might even be able to drink the cost of your ticket.”