A few weeks ago Marriott Bonvoy announced a new partnership with Manchester United.

Members can now redeem their points for a number of exclusive Manchester United VIP packages such as the ‘Stadium Announcer’ Experience, ‘Welcome the Team’ on arrival at Old Trafford, a ‘Kit Manager’ Experience as well as hospitality packages.

As Marriott didn’t have enough time to auction off tickets to the Manchester United vs Liverpool game, they invited a number of top tier Marriot Bonvoy members living in the area to experience the Ambassador Lounge hospitality package. 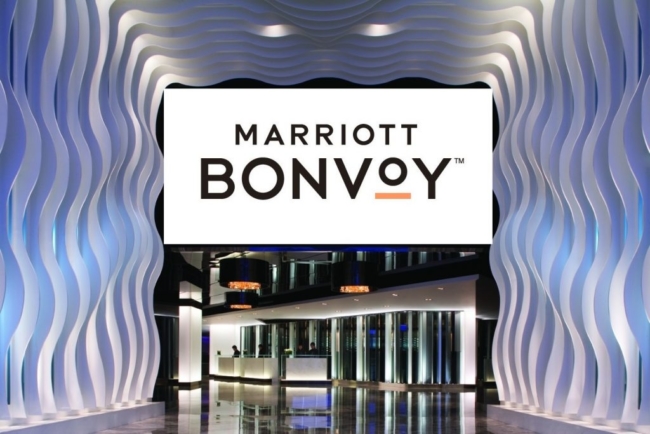 HfP reader Jamie was one of them and he was so kind to take some pictures and write a few lines, so we could share his experience.

One key thing to note in this review is how the Ambassador Lounge package, which Jamie had, differs from the VIP Centennial Suite private box package.  Marriott is offering both options for games and it is not very clear online how they differ, although there are substantial variations in what you get.

Guests were advised to arrive three hours prior to kick-off using a private entrance within the Munich Tunnel in the Sir Bobby Charlton stand, just beside the directors box entrance.

(Rob adds:  a friend of mine was at the Manchester Utd v Southampton game this weekend in the VIP box / Centennial Suite.  He was also told to arrive three hours early.  As the Centennial Suite box only has a buffet which you can eat at your leisure – and you only get main courses before kick-off with desserts at half-time –  he felt this was totally unnecessary.  When I redeem for Emirates Box packages at Arsenal, which also have a buffet, I tend to arrive one hour before kick-off and that is about right.)

Upon arrival guests were given a glass of champagne and shown to their table. There were about 16 tables which seated six people each. Marriott had a few of the tables and so did a number of other sponsors including DHL and Adidas. 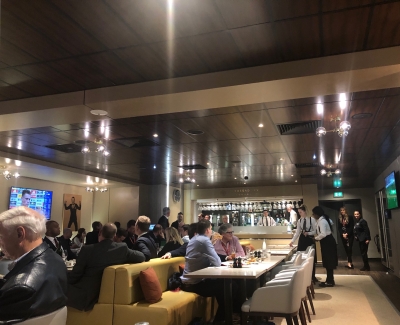 On every seat was a Paul Smith goodie bag with a programme and a Manchester United style notebook. 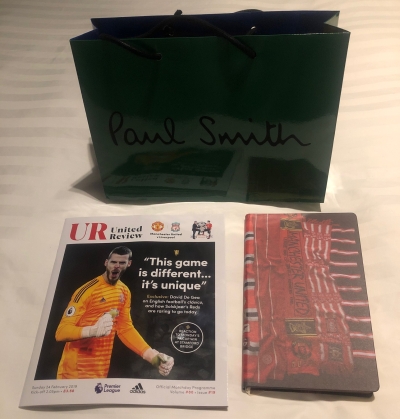 This was the match day menu in the Ambassador Lounge:

Jamie chose the Ravioloni as his starter: 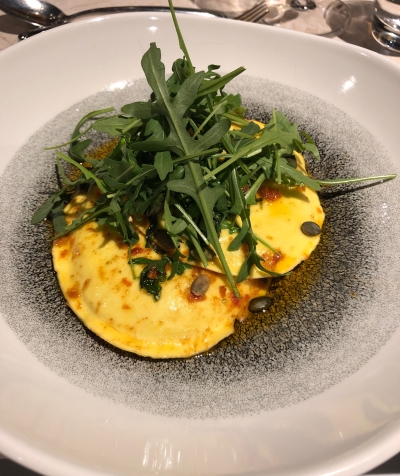 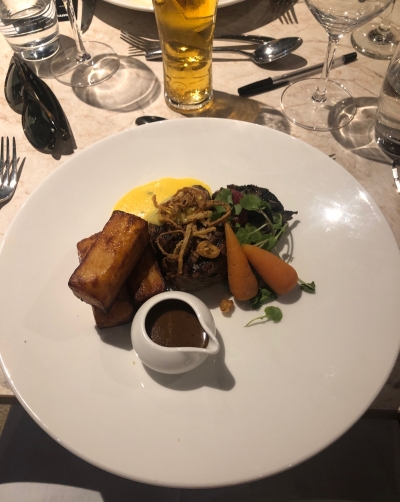 and the sticky toffee pudding as his dessert: 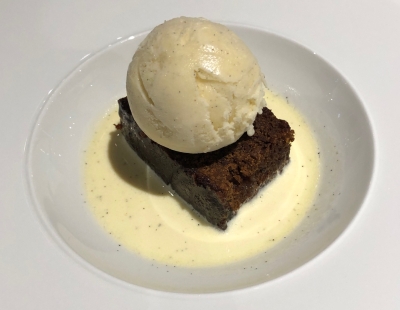 All three courses were delicious and everyone agreed that the food was exceptionally good based on the usual standards for an event like this.

The wine menu had three red, three white and one rose listed. Other drink options at the table were draft beer, cider, gin & tonics and some brandy. There was a fully stocked bar at the far end of the room that had a fairly diverse selection.

During the meal Manchester United legend Quinton Fortune and Liverpool legend Alan Kennedy did a Q&A. They also came back during halftime and after the game to give their opinions as the game progressed, which Jamie felt was great.

In addition there was also a live singer (!) who filled the gaps in between. 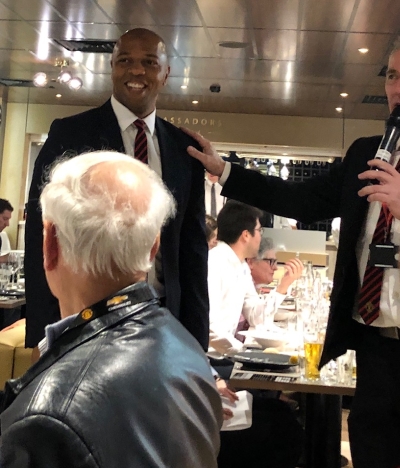 Just before kick-off Jamie was brought out to his seat and given a little pick and mix of sweets to enjoy during the game.  The seats were just to the left of the director box with fantastic views. The seats were padded leather which is a lot more comfortable than the standard seats. However, space wise it was still a bit tight. 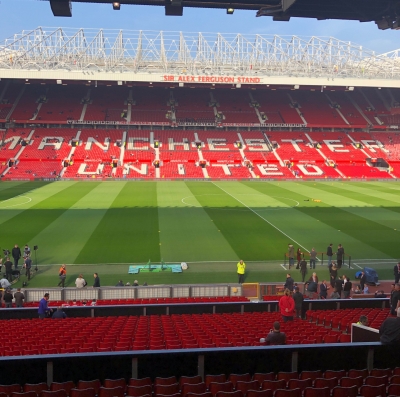 Before the match he were asked what he would like to drink during half time and when Jamie went back into the lounge his drinks were waiting.  There were also some steak pies and other snacks. 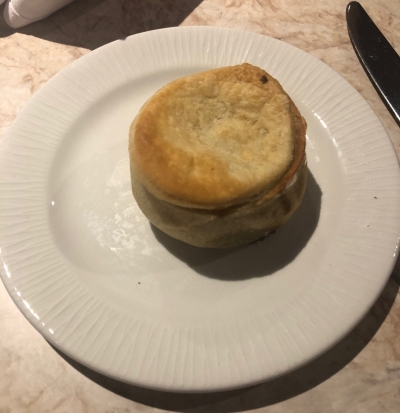 At full time there was another hour or so to enjoy the facilities with coffees and more drinks coming in abundance before heading home.

Marriott Bovoy also offers VIP box seats in a Centennial Suite if you want a direct view of the pitch from your table with complimentary food and drinks.

You can either watch the game from inside the suite at the dining table or sit in a seat directly outside, on a private terrace which is exclusive to the people in the box.  The terrace has a TV screen on it which allows you to watch replays without having to go back into the box.

The Centennial Suite does not offer waiter-served food.  It is a buffet, with main courses served before kick-off and desserts at half-time.  The quality was reportedly very high (this came from a person who spends a lot of money in fine dining restaurants).

This package also included a ‘meet and greet’ with a Manchester United legend – there were four of them for this weekends game.  The ex-players and a photographer come into the box, you can have your picture taken and then it is emailed to you.

There are currently seven VIP box packages for two people available for the Manchester United vs Watford game.  As the suites seat 16, this implies that the entire suite is being offered to Marriott Bonvoy members, plus two hosts.

How does the VIP Centennial Suite package differ from the Ambassador Lounge?

The pros of the Centennial Suite VIP box are the exclusivity (capacity is 16 people, small compared to the large number of tables in the Ambassador Lounge), privacy, the ‘meet and greet’ with past players and a direct view of the pitch from your table.  The Ambassador Lounge, on the other hand, gets you get the Q&A session with past players – there is also potentially more atmosphere during the game as you’re out in the main stand rather than on your private terrace.

Overall Jamie felt that the Ambassador Lounge was a fantastic day out.  He would recommend it to anyone who wants to make their next match day experience special, and he was very impressed at how great the staff were and how smoothly the whole day was run.  His only comment was that the Ambassador Lounge has a very corporate vibe due to the nature of the table owners with only one or two children present.  Jamie felt he was, by far, the youngest person in the room at 25 years.

If you want to bid for a Manchester United package with your Marriott Bonvoy points, the packages currently available to bid for are :

Thanks to Jamie for the pictures and the Ambassador Lounge review, and Tom for the extra comment on the Centennial Suite.