This is part two of my article on the brand new British Airways Club Suite seat, launched today.

Part 1 of my BA Club Suite review is here if you click through.

The British Airways Club Suite has a door!

Yes, you get a door.   Is this is a gimmick?  Possibly.  Super Diamond / Elements seats are already very private, as are the similar Cirrus seats such as those used by Air France on its refurbished Boeing 777 aircraft.

The door isn’t very high.  Cabin crew, and of course anyone walking through the cabin, can see you as clearly as they can see you in the current seat.  It’s not like the new Emirates First Class suite which I reviewed here where you are fully enclosed and – if you wish – the crew pass you food through a hatch!

On the other hand, the door is high enough to make the seat surround feel higher than usual.  Whilst you shouldn’t draw too much from a VR simulation, you may find it more claustrophobic than similar seats.  This is really something that needs to be tested in the flesh though.

Gimmick?  You decide.  But as a marketing tool, it is fantastic. 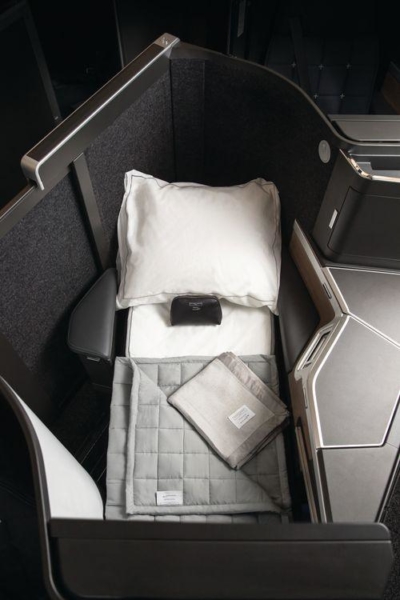 How does Club Suite differ from Qatar’s Qsuite?

Let’s be clear about what you’re getting here.  This seat is Super Diamond / Elements with a door.  It isn’t Qsuite, where the seats are not angled at 30 degrees and where you can pre-book a pair or even a block of four seats for your group and remove the internal dividers.

For the solo traveller it doesn’t make any difference.  For a pair or family of four there is a difference because you can’t create your own private space with Club Suite.  The new arrangement is worse than Club World for families with young children because you can’t be within (literal) arms reach of them.  Couples may be annoyed that they need to sit away from the windows, in the middle block, if they want to be able to chat during the flight.

What about families with babies?

Bassinet seats will still exist.  Whilst it wasn’t part of the VR simulation, the second of the two A350 Club Suite cabins has space for bassinets to be attached in front of the first row of suites. 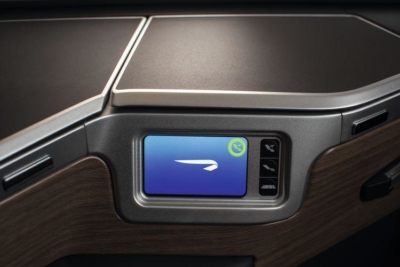 Dark and classy.  Remember that I have only seen this via virtual reality so it is hard to get a clear impression.  There are lots of browns, blacks and greys, which of course sit alongside the grey White Company blankets and black amenity kits.

Is it too dull?  The Air France Cirrus seat has bright red storage cupboard doors, for example, which certainly livens things up.  Let’s see how it works in practice.  In reality, it doesn’t really matter how the cabin looks when it is empty because the passengers literally bring their own colour.

The walls of the suite are covered with a furry material that BA likened to the stuff that lines your car boot!  This is designed to help muffle any sound, which is increasingly becoming an issue as newer aircraft become quieter and quieter and passenger noise becomes more noticeable. 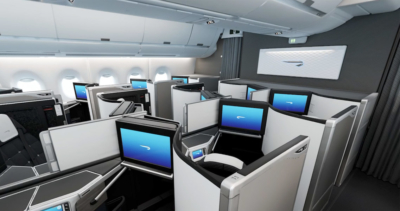 The seat isn’t everything, of course

It isn’t clear how the 56 seats on the A350 will be split.  The VR simulator showed a 48 seat open cabin which looked very dorm-style, with presumably a smaller 8-seat cabin behind.  Cathay Pacific uses a similar layout on its A350 fleet so this may well be accurate.

Food and drink is also a large part of the business class experience.  The decision to move the catering contract to Do&Co from 2020 should lead to a noticeable improvement in quality, similar to what is currently offered on New York JFK and the handful of other routes it already caters. 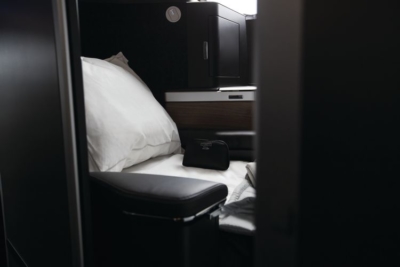 Final words …. what do I think of BA’s Club Suite?

If I am honest – and I said this to British Airways on Friday – it is at the top end of my expectations.

There was a risk that BA would go for ‘good enough‘ .  By ‘good enough‘, I mean ‘something that’s not as good as the leaders but which is good enough to make you pick a direct BA flight rather than an indirect Etihad / Qatar etc flight‘.

I underestimated them.  I’m not totally sold on the colour scheme but this looks as good as anything else I have flown lately, even if the door is arguably a gimmick more than anything else.  That said, I never close the doors on First Class suites when I have them.  Perhaps the suite sides are too high, perhaps not.

What I would say, having spent time with the lead designer of the seat on Friday, is that BA has gone to a lot of trouble on the small details.  Lighting looks good, for example, and the new layout means that overhead lighting is available again too.  Little details like the vanity mirror will be appreciated. 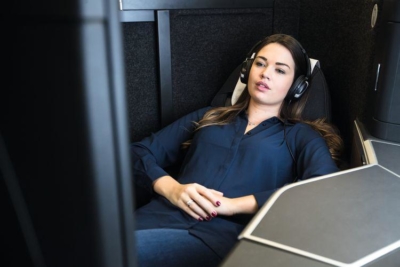 When can I try Club Suite?

Don’t get carried away.  Alex Cruz admitted in a recent presentation that he expects satisfaction ratings for the current Club World seat to fall sharply when passengers walk onto their plane and realise that they are not getting the new product.

Manufacturing is apparently restricted to three seats per day.  British Airways has talked about a four year plan to roll the seat out.  It seems that it won’t be going onto the Boeing 747 fleet which is being retired over the next four years.  No-one was willing to confirm that it would go onto the A380 fleet either.

By Christmas, the plan is for six aircraft with Club Suite to be in service.  Four will be new A350 planes and two will be refurbished Boeing 777 aircraft.  I would imagine that you will then see roughly one plane per month converted after that.

(For comparison, Qatar Airways told me in Berlin last week that only 41 aircraft currently have Qsuite, two years after it launched.  These things take time.)

As there is no First Class on the first batch of A350 aircraft – and possibly not on the 2nd batch either – Club Suite will be not be used on prime routes like New York JFK straight away.  Toronto and Dubai are probably typical of the destinations where you will find it.  ‘Prime’ routes will need to wait until four-class Boeing 777 aircraft are retrofitted.

That said, as I was sitting in my little virtual reality cabin on Friday, I did begin to wonder where First Class sits in the world of Club Suite.  With a business class seat like this, First Class needs to be more about the fine food, fine drink and specially trained staff who work exclusively with First Class passengers.  The Grand Siecle champagne aside, British Airways doesn’t have this.

If you want to be one of the first people to give Club Suite a try, you may see it on the first Madrid flight of the day (06.20!) from mid August.  It isn’t timetabled yet because the exact delivery date from Airbus is only confirmed 30 days in advance.  From September / October it will move to selected Toronto and then Dubai services.

Here are two BA videos if you want to see more:

Over to you, Virgin Atlantic.  I look forward to seeing your effort next month.