Last week we reported that British Airways was sending its three ‘retro’ repainted Boeing 747s in BOAC, Landor and Negus heritage livery to Manchester, Newcastle and Glasgow on 25th August.

These flights are now cancelled.

Once these planes had been spotted in the timetable, people piled in to book.  Tickets were soon selling for many times the amount you would usually pay for a flight from London – in some cases as much as £400 for an Economy return which is, frankly, absurd for a thirty minute flight.

The general assumption was that, since the August bank holiday marks British Airway’s ‘official’ 100th birthday, these flights would be involved in some sort of celebration event.

British Airways put out a statement yesterday saying there would be no ‘celebrations’ on these flights, and that passengers could have refunds if they wanted.  The flights were then switched back to the usual short haul aircraft to ram home the point!

In its statement, BA said that it is “still considering our options for that weekend and will release details in due course”.  This suggests that something will happen over the late August Bank Holiday weekend, but these Boeing 747 flights will no longer be part of it.

(BA may also have been stung by criticism from some quarters that this was an environmentally unsound move, although as the flights were virtually sold out this seems a little unfair.)

The actual position here is clouded by the fact that BA’s travel trade announcement blames:

“Some aviation websites [which] made a guess at what we were planning, but we were very clear that this was speculation.”

However, a Flyertalk moderator and uber-heavy BA flyer claims that advance notice of the flights was given to some top customers – including himself – so that they could book straight away if they wished …… 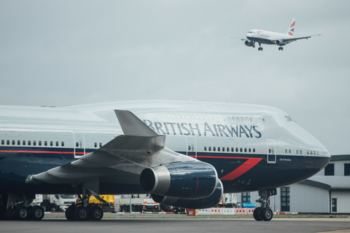 HFP was not promising anyone a great spectacle.  Rob wrote:

“I am confused by the enthusiasm. These are all very old Boeing 747 aircraft which are, literally, on the way to the scrapheap.  They look good in the new liveries but inside there is nothing special about them.  I doubt British Airways can do anything creative on-board in such a short flying time – I doubt there is time to serve anything at all.

If you are SO keen to fly a British Airways long-haul plane on a short-haul route, remember that you can fly a Boeing 777 to Madrid every day of the week.  During August, although it is not yet in the timetable, you will be able to fly to Madrid on the brand new A350 with Club Suite in Business Class.  Now that is worth doing ….”