Alaska Airlines announced yesterday that it will be joining the oneworld airline alliance.  This is a welcome boost for the alliance following the resignation of LATAM.  Royal Air Maroc is already gearing up to join oneworld on 1st April.

Alaska Airlines has been a British Airways partner for a long time.  You have always had the opportunity to both earn and spend Avios on Alaska Airlines’ strong US west coast network.

Alaska has now decided it wants to deepen its ties with oneworld partners and, in particular, American Airlines.  This is a multi-pronged partnership that should enable easier opportunities to earn and use Avios when flying on US domestic routes.

When is Alaska Airlines joining the oneworld alliance?

By far the biggest news from the expanded partnership between Alaska and American Airlines is the announcement that Alaska Airlines intends to join oneworld in the summer of 2021.

This is no real surprise given Alaska’s existing relationships with both American and British Airways, both of which are cornerstones of the alliance. Alaska was not previously part of an airline alliance, instead choosing to curate its own portfolio of partners in the same manner as Virgin Atlantic.

The Avios benefits are limited, but you gain tier points

Because of the existing British Airways / Alaska partnership, covered in this article, you are gaining less than you think from their entry into oneworld.

It is already possible to spend Avios on Alaska.  The problem is that you only can book by calling British Airways as it is not integrated into ba.com.  This should change once Alaska joins oneworld fully.

The real benefit is from tier points.  Whilst you currently earn Avios when flying with Alaska, you do NOT earn British Airways Executive Club tier points.  This will change next year.

British Airways Executive Club Silver and Gold members will also get access to the full range of oneworld benefits when flying with Alaska, including lounge access.

Members of other oneworld frequent flyer programmes have more to gain from this announcement than Executive Club members, as it will open up Alaska award inventory to them for the first time.

American Airlines and Alaska codeshare expanded to include long haul

The other part of the announcement is that American and Alaska will expand their existing codeshare to include American’s international routes from Seattle and Los Angeles.  This means that you will enjoy seamless connections between the two airlines at both West Coast hubs.

Compared to American’s seven routes, Alaska serves an astonishing 60+ airports from its hub in Seattle-Tacoma: 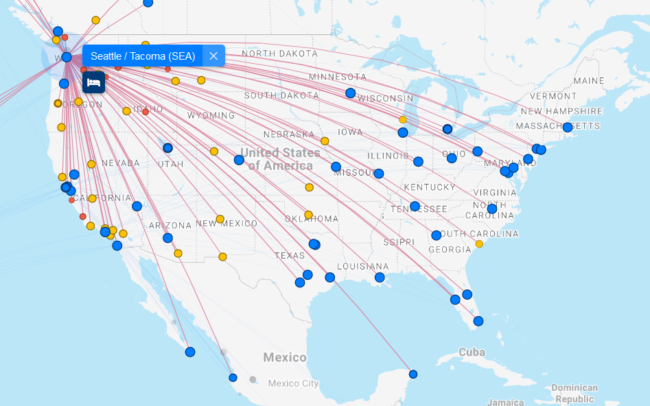 In order to support the combined Alaska and American network out of Seattle, American Airlines is launching Heathrow to Seattle in March 2021.  This will complement the two existing British Airways flights to Seattle and provide feed for the domestic flights.

(Or will it?  I have a suspicion that British Airways may now quietly drop one of its daily Seattle services.  Three flights per day between BA and AA seems excessive.)

American will also be launching a new route to Bangalore from Seattle.

Of course, if you want to maximise your British Airways Executive Club tier points, the smart routing – once Alaska joins oneworld – is to fly from the UK to the US East Coast and then pick up an Alaska Airlines connection to Seattle.  Seattle to the East Coast is over 2,000 miles and would earn 140 British Airways tier points in Business Class.

There is one downside here …..

We would expect that these partnerships – except for the ones with oneworld members – will now be cancelled as contracts come up for renewal.

If you want to redeem Avios on Alaska before they join oneworld …..

This HfP article explains everything you need to know about using Avios on Alaska.  For many people, the most attractive part is the ability to fly to Hawaii from the US West Coast on Avios.

Our beginner’s guide to redeeming Avios points is here and includes more details on how to spend your points with the airline partners of British Airways.

PS.  If you missed it, take a look at our recent article on the top 10 reasons to get the British Airways Premium Plus American Express card.