Lufthansa and the German Government finally agreed a €9 billion bailout on Monday, although there remains a risk that the European Commission blocks the deal or requires substantial changes.

The German Government will take a 20% shareholding in Deutsche Lufthansa

It has an option to trigger an additional purchase of 5% + 1 share, creating a block for key votes, if there is any attempt to takeover the airline during the period that Government loans are still outstanding

The Government will take two seats on the supervisory board

The Government has agreed to sell its shares by the end of 2023 if the company has repaid its investment and the share price has reached a certain threshold. 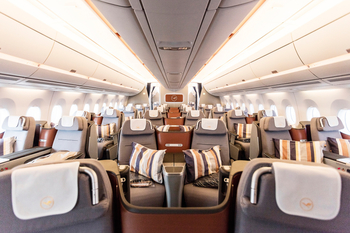 The investment will be structured as follows:

€5.7 billion in redeemable non-voting shares, of which €4.7 billion will carry a guaranteed 4% yield, rising in stages to 9.5% by 2027 (this does not have to be repaid, but it is clearly expensive and the airline will want to refinance it as soon as possible)

The following restrictions will be in place until the Government is fully repaid:

Management pay will be capped, albeit at an unspecified level

There is no mention of the requirement to continue with the planned purchase of Airbus aircraft, which was believed to be a sticking point in negotiations last week.  Lufthansa is likely to want to cancel or defer these orders given that the airline is currently planning to cut its fleet by 100 aircraft.  The linked article mentions cutting 70 aircraft but these number has since been increased.

There is no point stopping at €9 billion, of course, if you can get more.  Lufthansa is also insisting that the Swiss, Austrian and Belgian Governments put their hands in their pockets.

Switzerland has already agreed CHF 1.3 billion of credit guarantees, which will allow Lufthansa to borrow the equivalent sum on exceptionally generous terms because the Swiss Government is guaranteeing its repayment.

Deals have not yet been reached with the Austrian and Belgian Governments.

European Union approval could be an issue

Once signed off by the various Lufthansa boards, the deal will require approval by the European Union.  This is by no means guaranteed, especially as Ryanair is highly likely to object.  There could be pressure to open up slots at Frankfurt or Munich, or to reform some of the complex deals which protect the airline from competition.

(Emirates, for example, has been very vocal in its opposition to a Government ban on flying to more than four cities in Germany.  It cannot fly to the new Berlin Airport unless it drops one of its existing routes to Frankfurt, Munich, Hamburg or Dusseldorf.)

Where does this leave IAG / British Airways?

Air France KLM has already secured a bailout of €10 billion.  Lufthansa is now at €10 billion, including the Swiss loan guarantee, and may end up at €11 billion when the Austrian and Belgian Governments have chipped in.

It is a difficult situation.  The UK and Spanish Governments would struggle to refuse IAG a similar €10 billion package to those offered to Air France KLM and Lufthansa.  British Airways cannot realistically take any funding from the UK Government whilst it is planning to cut pay for virtually all staff and to make massive redundancies.  Accepting Government money would also guarantee the survival of Virgin Atlantic since it would insist on a similar deal.

The risk for IAG is that it finds itself seriously weakened against its two major European competitors going forward, both of which now have bulging wallets.