Unlike other airlines, BA reconstructed its food offering from scratch. The old recipes and menus went out the window, to be replaced with a smaller, more limited selection.

The change also involved a move to cold dishes (mostly sandwiches) in virtually all classes. First was the only cabin to feature hot main courses.

Instead of being presented on trays, your food would arrive in a box to avoid cross contamination: 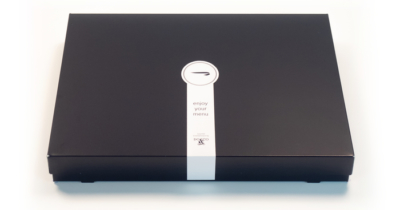 Thanks to reader Joe, we now have some photos of what the temporary catering really looks like in First. Joe was on a flight from London to Hong Kong.

Drinks are being served in plastic cups in all classes. British Airways is serving Nicolas Feuillatte Réserve Exclusive Brut NV Champagne, which has previously appeared on the M&S buy-on-board short haul menu: 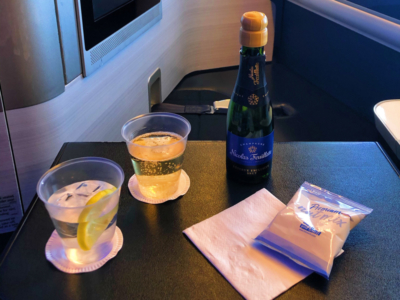 For dinner, you are given this large box: 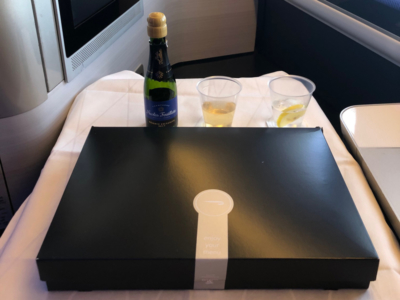 …which includes two cold starters/sides, a bottle of water and some bread. Your main (hot) meal comes in a separate box, with an economy-style metal foil covering: 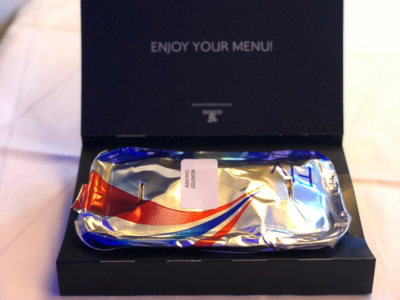 It doesn’t look quite as bland as an economy meal, but it’s not far off! 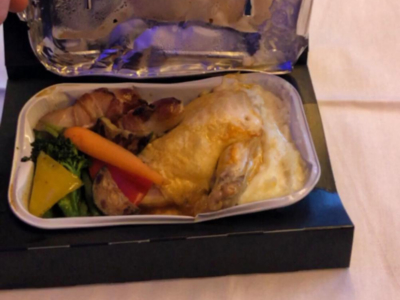 For dessert you get three little plastic-wrapped cups including DO&CO’s signature chocolate dessert: 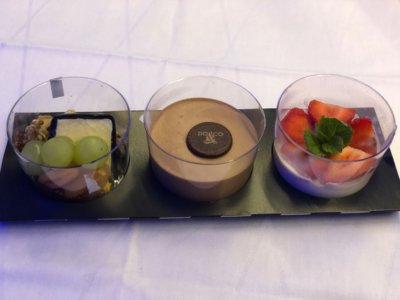 British Airways is currently serving afternoon tea as its second meal, at least on this flight.  It features a selection of finger sandwiches, macarons, a fruit salad and some clotted cream and jam to go with what I imagine will be a scone: 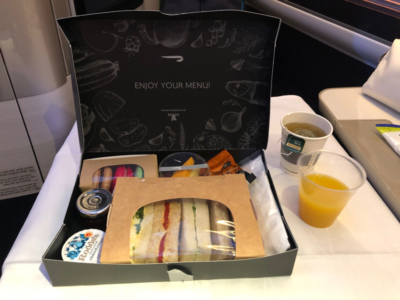 Is it time to improve catering again?

At the time British Airways re-introduced its Covid-19 catering measures, sit-down restaurants across the UK were still boarded up. BA’s meals were a sensible compromise between comfort and safety: an improvement on the ‘cheese sandwich and a kit kat’ that the airline had been offering in previous months but with fewer contact points than pre-Covid catering.

A lot has changed since then as lockdown restrictions have eased. Crucially, restaurants were permitted to open in early July and whilst measures have been taken to minimise cross-contamination, you’re unlikely to see your waiter or waitress bringing your food in paper boxes or with plastic lids.

It is not entirely BA’s fault. Government guidance to airlines still suggests that they offer “pre-sealed and pre-prepared food and drink,” which British Airways is clearly following.

Whilst BA’s temporary meal service is an improvement, it is now generally lagging behind in comparison with its competitors and the hospitality industry at large. Virgin Atlantic, for example, is offering hot meals in every cabin, whilst Lufthansa is offering its meals in a more normal service on trays with real crockery.

Is there a way that British Airways can safely improve its offering whilst still adhering to government guidelines? I’d say so. Pretty much all in-flight food is pre-prepared and packaged anyway, with cabin crew only required to re-heat and present dishes. I’m not sure that boxing food rather than serving it on re-usable crockery really moves the needle.

It will be increasingly important for British Airways to prove that it is offering a good service, especially in premium cabins, as it encourages people to make future bookings.