It is quite a long time now – back in September – that I originally posted that the two Priority Club credit cards now come with free status.

The problem was that Priority Club / Barclaycard never actually made this ‘official’.  Existing cardholders got a note on their statements saying that it was going to happen (and it did) but to this day it does not appear on the credit card website. 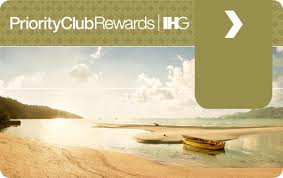 This had led to many posts on Head for Points asking if this perk still exists, or ever really existed.

It has not helped that Priority Club has been a bit slow at upgrading new cardholders, so people were – not surprisingly – getting confused over whether or not their account would be upgraded.

Priority Club has launched a video outlining the eternal joy and happiness that getting these credit cards will bring you.

You can, in theory, access the video here.  However, you won’t be able to watch it because you need a ‘one use only’ code given to you at check-in at a UK Holiday Inn hotel!

Don’t panic, though.  With the wonders of modern technology, you will find a home-made video of the Priority Club video uploaded on Flickr here!

You will hear from the soundtrack that the video contains the promise that your Priority Club account will be upgraded to Gold (for the free card) and Platinum (for the Black card), for as long as you hold the card.

(The hotel balcony the couple are standing on at the end is in the InterContinental LeGrand, by the way!)

The video ends with two links which offer improved sign-up bonuses on the cards.

The free card usually comes with 10,000 Priority Club points.  This link gives you 15,000 points instead.

On the ‘Credit Cards Update’ page of Head for Points I also give this link which offers 40,000 points for getting the Black (£99 fee) card.  The link was circulated in January 2013 – it may still work but at some point it will probably stop working.  It is up to you whether you decide to risk it.  The 30,000 link is definitely OK.