This post is now less relevant than it was, unfortunately.  I had it ready to go for a week or so, waiting for the right day.  And then, before I could run it, the effective end of the 3V card bonanza was announced on Thursday.

Reader David hit serious trouble recently when he tried to buy some 3V cards in his local Tesco store.  He allowed me to share his story, which I have edited slightly: 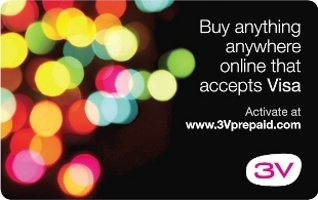 “I just thought I’d get in touch to give your readers a word of warning regarding the bulk-purchasing of 3V gift cards from Tesco.  I have just got back from my local Tesco having been detained for the best part of an hour-and-a-half.

This morning I returned to the store with the card and receipt in hand and went straight for the customer services desk.  Tesco are very twitchy when it comes to gift cards, so the duty manager was called.   “He’s just coming down”.

A few minutes later the duty manager appears, with two security guards in tow.  “Excuse me sir, we believe you’re using a fraudulent card and need to talk to you out the back”.  I was being escorted to their “Interview Room” (a 2m x 2m room with a table and a couple of chairs).  On the walk down I asked the duty manager exactly what had given the impression that my transaction was fraudulent.  He produced a piece of paper which stated something to the effect of:

To all stores, please be aware that criminals are using fraudulent cards to purchase large numbers of iPads, tablets, gift cards, etc.  The cards they are using have numbers ending in xxxx, yyyy and zzzz.

yyyy is, by coincidence, the last 4 digits of my Amex Gold card.

I was invited to sit at the interview table and given a glass of water.  The duty manager disappeared at this point; I didn’t see him again.  The door has been propped open with a chair, and a security guard is standing in the doorway avoiding eye contact.  There are several staffers walking by and almost every one of them gave my a look which said “so they’ve caught another one”.

20 minutes pass which I use to establish why the security guard didn’t make it into the police.  Eventually, two police officers show up.  I produced my driving license and cards in an effort to prove I am the cardholder.  This didn’t seem to be enough so PC #1 turned and asked PC #2 if there was a number they could call American Express on.

Cue 5 mins of policeman on the 0845 number frustratedly entering my card number to the ask “What’s your 4-digit PIN?”.  “I’m not giving you my PIN – let me speak to them”.  Once I’d authenticated as myself using my own credentials (!) I explained the situation to the girl on the end of the phone who then proceeded to ask me a few further verification questions in order that she could then vouch for me. At this point I’m thankful that Amex customer service is so good in terms of waiting times and staff attentiveness.  Having passed my call to the “fraud team”, the Amex customer service rep confirmed that I was the card holder and that the account was mine.  Well it wasn’t enough for the police who pressed on with their line of questioning:

I explained that it was essentially a ruse to gain Clubcard and MR points.  They were generally disinterested.  The store manager was lurking outside at this point and piped up:

At this point the police seemed happy I was just an airmiles gatherer and nothing more sinister. I was “released” from “custody”.

I was still £25 down in terms of my inactive giftcard though.  I now expected apologies all round and the red carpet treatment in terms of getting the issue resolved, but this was a naive assumption.  The store manager was terse, rude, and was clearly still convinced I was a criminal.  After all, my card ends in yyyy doesn’t it?

Cue another 20 minutes standing at the tills explaining to the store manager that he’s not “taking a £25 hit” on the replacement giftcard.  “You’re not taking a £25 hit because I was incorrectly billed for this useless, inactive card!  You’re simply supplying what I’ve already paid for.”

I get the impression not many staff truly understand gift cards, as was indicated by the poor gaggle of three till staff and one manager surrounding one till.  I will be putting my complaint in writing to Tesco regarding my treatment from their store manager.

All in all a very unpleasant experience.  I can see why they have to be vigilant and on the lookout, I get that, but the way it was handled was just awful.  I walked out that store two hours after I walked in, with my replacement 3V card and activation confirmation in hand, along with a dented sense of pride.

My advice to your readers is this:

Given the changes on Thursday, most people will not now be bulk buying 3V cards – unless they spend a lot on Amazon, pay a lot of ebay fees or have a council who still accept the cards.  There is still an important lesson here, though, which is that you can never expect everything to go smoothly if you take part in schemes like this!