A couple of years ago, Hilton HHonors added ‘Premium Room Rewards’ as an award option.

On the face of it, this was a worthwhile addition, albeit one that would not appeal to a lot of people.  If you wanted to redeem for anything better than a basic room – which was not previously possible – you could.  Hilton HHonors effectively paid for your room for you, at a flat rate – give or take – of 0.2p per Hilton point.

This lead to some pretty scary numbers appearing when your tried to book.  For example, for September 16th, a standard room at the New York Hilton Midtown is $439 + tax or 80,000 points.  The next level of room – priced $30 more at $469 + tax, costs 168,840 points!  That works out, as I said above, at 0.2p per point.  You can tell why they were not popular.  However, in theory it was offering you more choice so it was churlish to complain. 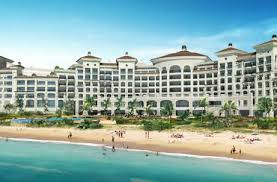 The Waldorf-Astoria in Dubai opened late last year with NO standard room redemptions at all.

(For completeness, I should say that Hilton told me yesterday in an email that: a) the employee who told me in writing that new hotels were now allowed not to offer standard rooms for redemption was wrong, and b) that it was purely an error that the W-A in Dubai has not offered standard room redemptions in all the time it has been open so far.)

Until a couple of weeks ago, a £500 + tax room at Easter at the Waldorf-Astoria Dubai was costing over 300,000 points.  I should know – I was checking every week as we had our eye on this property for that time.

However, that is no longer the case.  In recent days, its ‘Premium Room Reward’ pricing has changed.  It is even looking quite attractive on some dates.

Hilton appears to be giving hotels more flexibility in how they charge for premium rooms.  It is not clear how far this applies beyond the Waldorf-Astoria in Dubai at the moment.

Here are a few pointers from the W-A, from comparisons done yesterday:

Example 1 – February 18th.  Rooms are showing as 103,000 points or £377 all-in.  That is 0.36p per point.  This is actually BETTER than I value HH points – post devaluation – when redeeming them normally! It even makes American Express Membership Rewards transfers to Hilton HHonors a decent deal as you’d get 0.72p per MR.

Example 2 – April 11th (Easter school holidays). The pricing has moved again.  Rooms are £496 or 163,000 points. That works out at 0.3p per Hilton point, 20% worse than 18th February but still almost double value per point compared to what a ‘premium room’ used to cost.

Hopefully Hilton was correct in their email to me yesterday and that this property will correct its ‘mistake’ and start offering standard reward redemptions soon.  Even when ‘Premium Room Rewards’ get closer to the value you would receive from a standard room redemption, you still do not benefit from the ‘fifth night free’ on longer stays.

If ‘Premium Room Rewards’ pricing is starting to get more flexible, it would be a genuine boost to the whole Hilton HHonors programme – as long as it is not accompanied  by the withdrawal of standard room availability.