We are now getting very close to the grand opening on Heathrow Terminal 2 on June 4th.

You will hardly notice it at the time because – learning lessons from Terminal 5 – the airport is taking it very steady.  United Airlines will be the first to move and will have exclusive use of the terminal for two weeks.  I wrote about the timetable for moving in here.

(The first short haul airline, assuming you discount Turkish, is Aer Lingus on July 9th.  I will try to book myself on an Aer Lingus flight soon afterwards and file a report!) 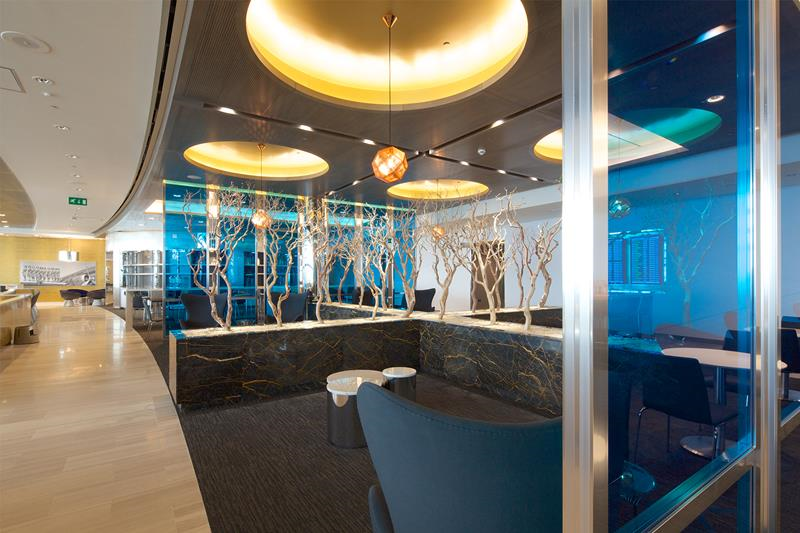 If we’re honest, US airlines are not known for having great lounges – especially domestically.  United does seem to be pushing the boat out here, with two impressive looking spaces – the ‘United Global First Lounge’ and the ‘United Club’.  The ‘Global First’ lounge will be the de facto choice for ALL First Class passengers using Terminal 2.

To quote from the press release:

Together, the two lounges occupy 22,000 square feet (2,043 square meters) of space and are located near the airline’s gates in Terminal 2’s satellite concourse. Both facilities feature floor-to-ceiling windows with views of the airfield, luxurious décor and vintage aviation-themed artwork. Both will offer complimentary food, beverages (including alcoholic beverages) and Wi-Fi. Seating areas and furnishings are conducive to either relaxing or getting work done, with abundant power outlets.

The United Global First Lounge, for customers travelling in United Global First (first class), is an oasis of privacy and personalized service. The centerpiece of the lounge’s dramatic design is an oversized Big Ben-style clock in the tea lounge section. Other features include a buffet area, a wine room, private phone booths and a quiet zone with couches and privacy drapes. Customers using the lounge will have the option of pre-flight dining from an à-la-carte menu.

Customers holding boarding passes for same-day travel in first class on flights operated by other Star Alliance carriers departing from Heathrow will be able to visit the United Global First Lounge.

The United Club, for United Club members and customers travelling in United BusinessFirst (business class), is the first facility outside the U.S. to feature the new United Club design concept. Its open layout has a variety of seating for over 280 guests. Amenities include a 25-seat full service bar, two buffet areas, a TV lounge and seven private phone booths.

Adjacent to the United Club are eight spacious shower suites for the use of customers using either the Global First Lounge or the United Club, offering complimentary toiletries and valet service with garment pressing and steaming.

Star Alliance Gold members and business-class customers holding boarding passes for same-day travel on flights operated by other Star Alliance carriers departing from Heathrow will be able to visit the United Club.

There will also be an arrivals lounge in the Arrivals Hall which appears to be a generic Star Alliance facility.

The teaser photograph above does look impressive.  There will also be another potentially worthy Priority Pass lounge – apart from United Club – in the form of the Plaza Premium lounge which I wrote about last year.