This is my review of the Conrad London St James hotel, its rooms and its facilities.

I wrote in August about the surprising news that the new InterContinental Westminster was to rebrand as Conrad St James with almost immediate effect.  It gave the Hilton upmarket business brand a presence in the capital overnight and instantly became the ‘poshest’ Hilton family hotel in London.

Following my original article I was invited by the hotel to take a look.  I was given a room with breakfast and lounge access for free.  Note that I live very close to the hotel (under 10 minutes by taxi) so I did not get any intrinsic benefit from staying there – I was not nearer my office, for example, and did not save any commuting money!

The property was converted from what appears to be office use about 18 months ago.  It is directly opposite St James Park tube station on the District Line. 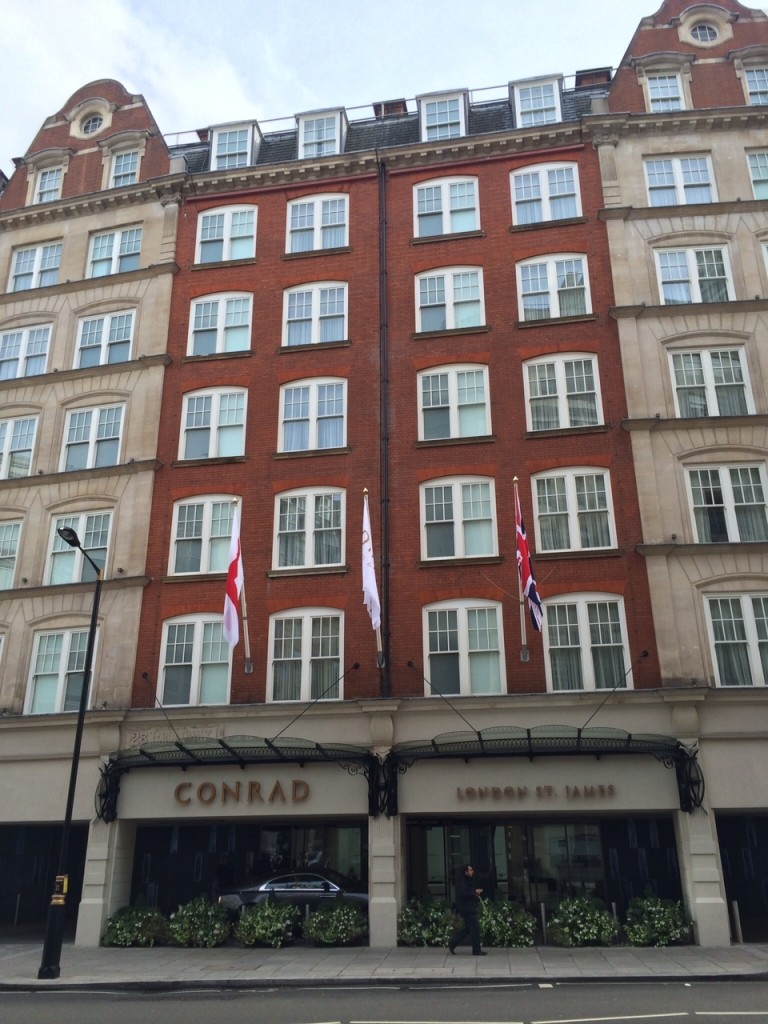 Scotland Yard is next door.  This will become important later! 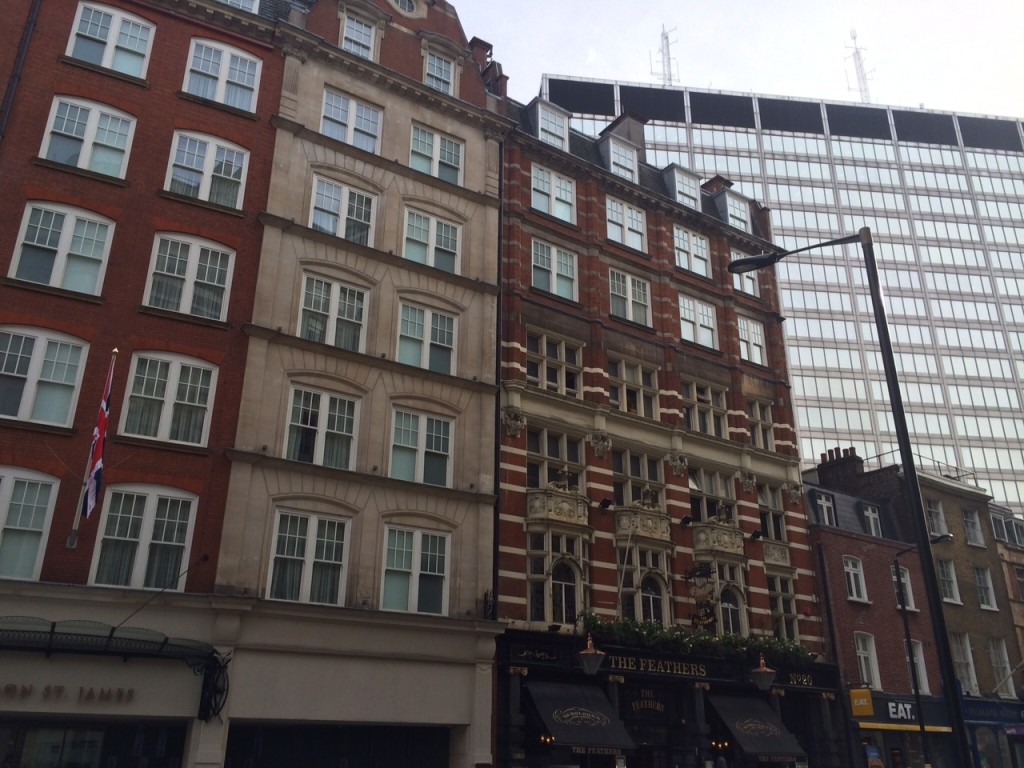 Check in was very efficient.  The lobby is bright and airy, benefitting from a glass roof which encases what is actually a triangular structure.

My Hilton HHonors Gold card was not in the booking and the clerk needed help from a supervisor to add it.  She was very polite and took me on a short tour of the ground floor as well as the first floor where the executive lounge is located.  I was then taken back to the lift and left to make my own way to the fifth floor.

My King Executive Room was very well appointed.  I had NOTHING to complain about.  It is a new hotel and no expense appears to have been spared on the rooms, fittings or the public areas.

There was a decent sized sleeping area with a large bed.  The TV was built into the mirror. 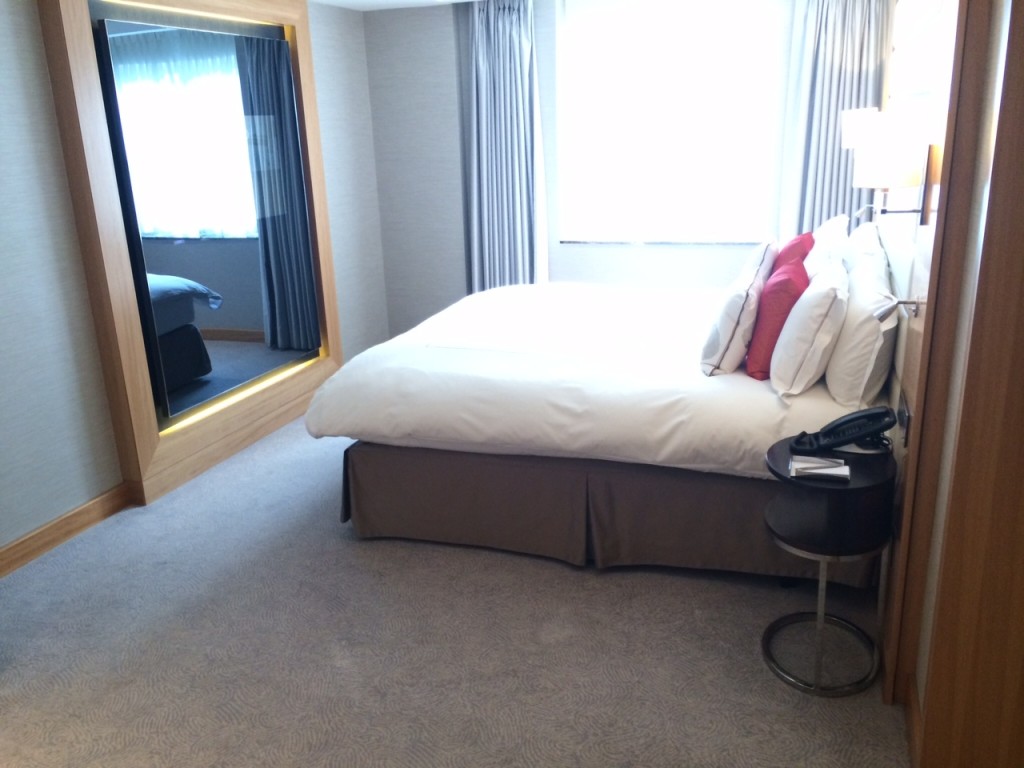 It was adjacent to a good sized desk with a large number of power sockets and an iPod / iPhone dock (with a lightning connector, rarely seen in a hotel).  I also had a Nespresso machine (not pictured) with a small carton of fresh milk in the fridge.  I always appreciate fresh milk – there is nothing worse than an expensive coffee machine and those silly plastic milk capsules …. 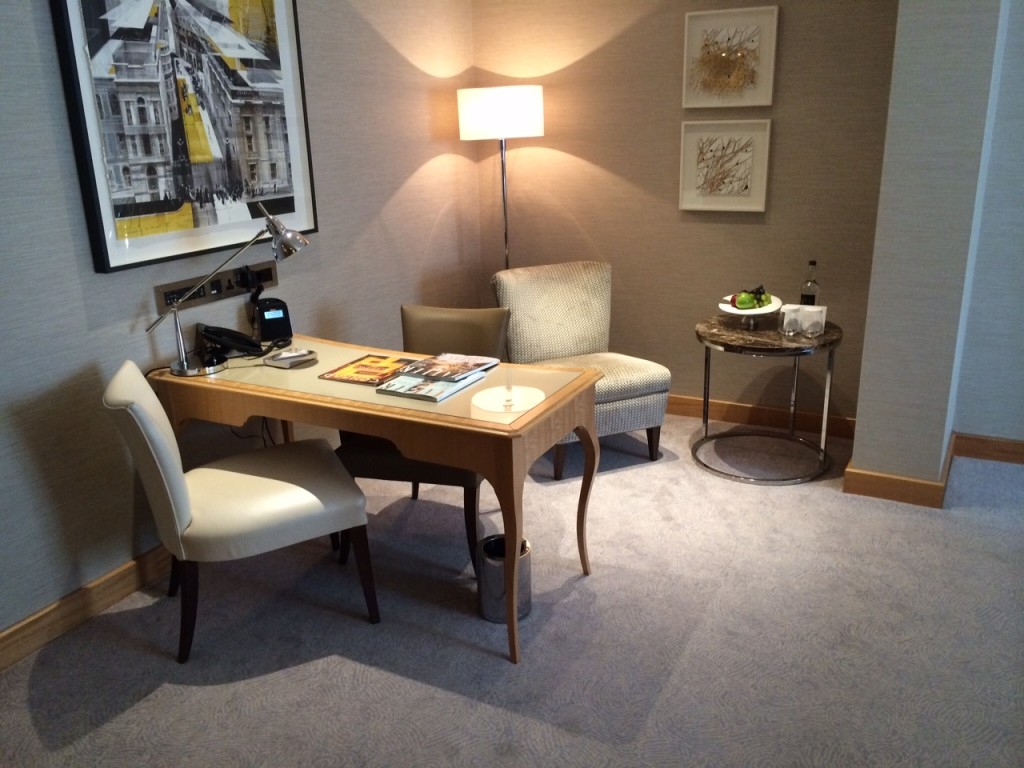 The bathroom was marble with a bath, a large shower and a big sink.  Toiletries were by Aromatherapy Associates which is standard Conrad issue.  The room also had a toothbrush, comb, razor, mouthwash and pretty much everything else you might need. 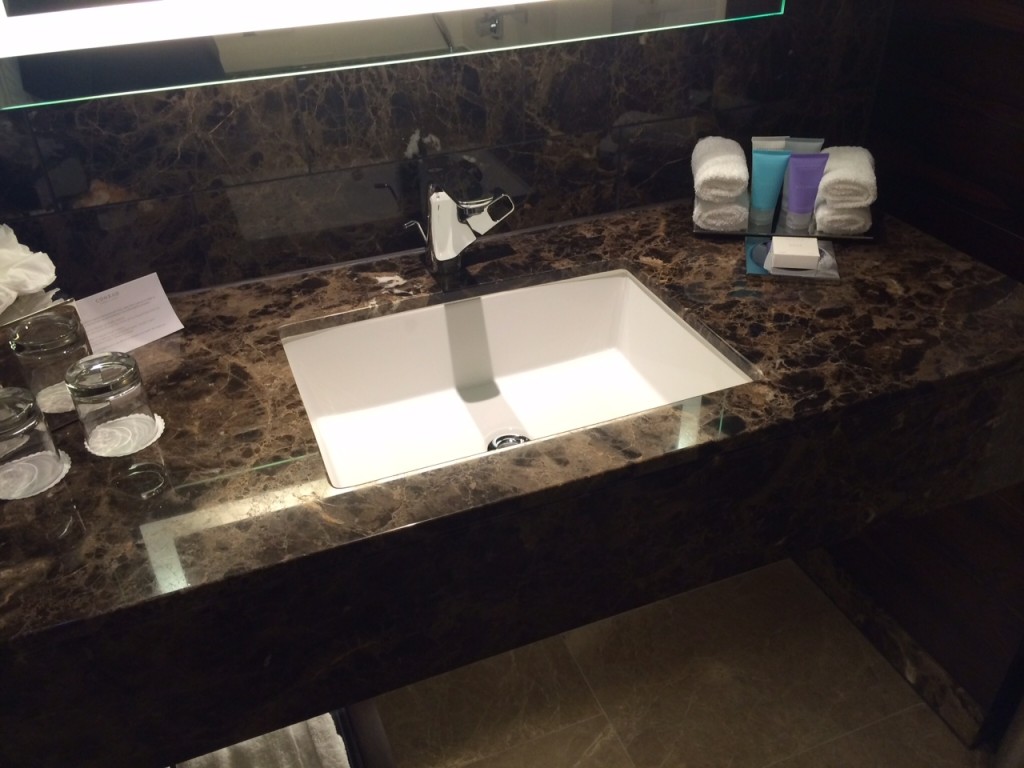 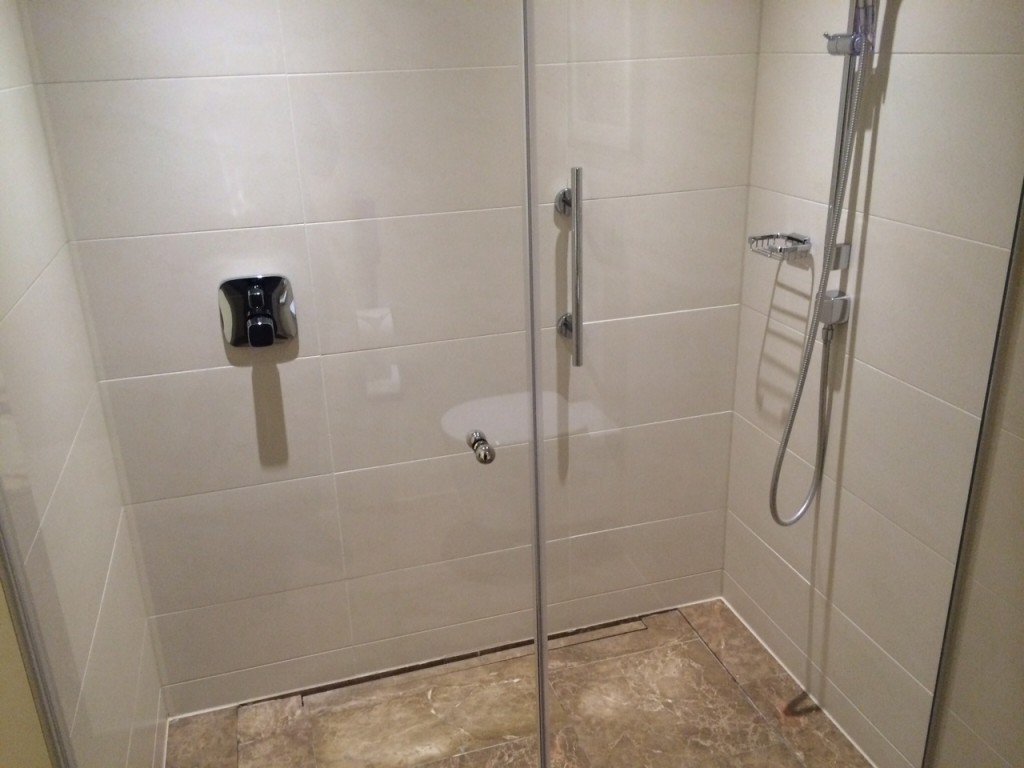 There is always a catch, of course.  In this case, it was the view: 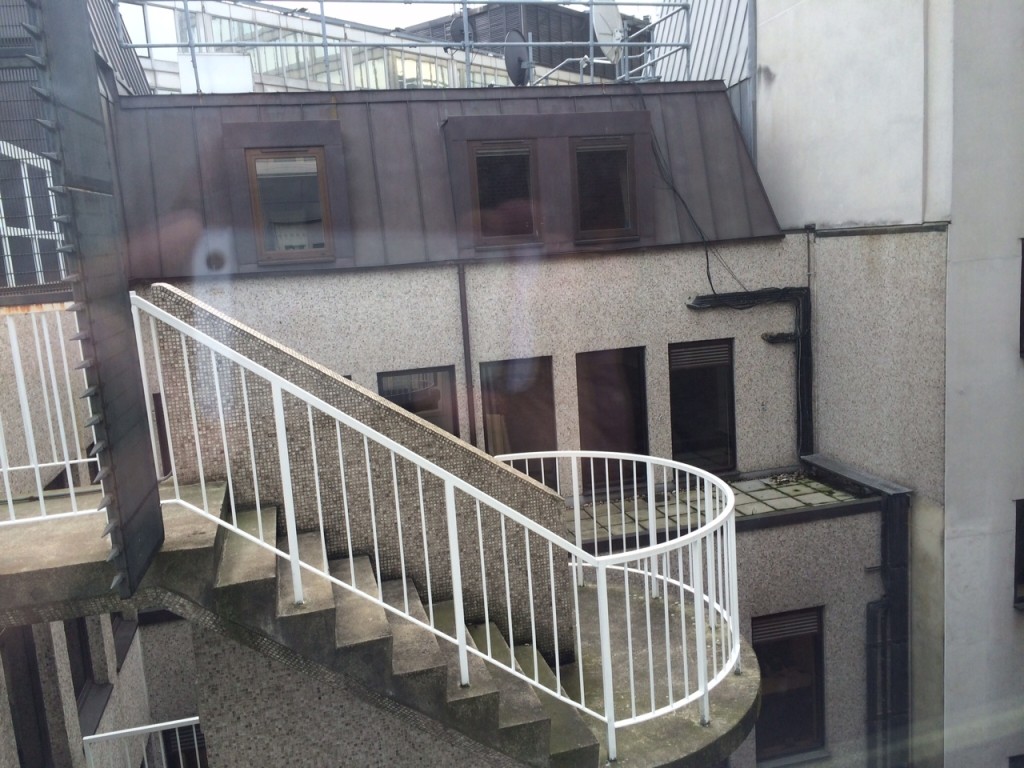 With the nights drawing in, though, it is very possible that if you are here on a business trip you will never see the outside of the hotel in daylight.  It is also likely that the rooms at the back are quieter than the rooms overlooking Broadway at the front.

I also had connectivity issues.  I stuck to using the free wi-fi given to me as a Hilton Gold.  This is advertised as 512 kbs and felt like it.  Whilst not stated, it seems to have only been for one device since, after connecting my laptop, I was unable to connect my iPad or iPhone.  There is a premium wi-fi service available at a cost, and if I was here on business I would certainly have upgraded.

More serious was the inability to receive a decent mobile phone signal in the room.  Despite being five floors up, my Vodafone signal varied from nothing to a very weak 3G.  There was no chance of 4G.

I was told by the taxi driver who took me home, and the hotel confirmed to me afterwards that they also suspect this, that there is an issue with New Scotland Yard next door.  It seems that the Yard uses some sort of signal blocking to stop telephone calls inside the building being monitored.  This seems to be distorting mobile phone access in certain parts of the hotel.

The lounge was impressive.  There is no other way of putting it.  The space has been intelligently used and is divided into different ‘zones’, allowing you to find your own cosy corner such as: 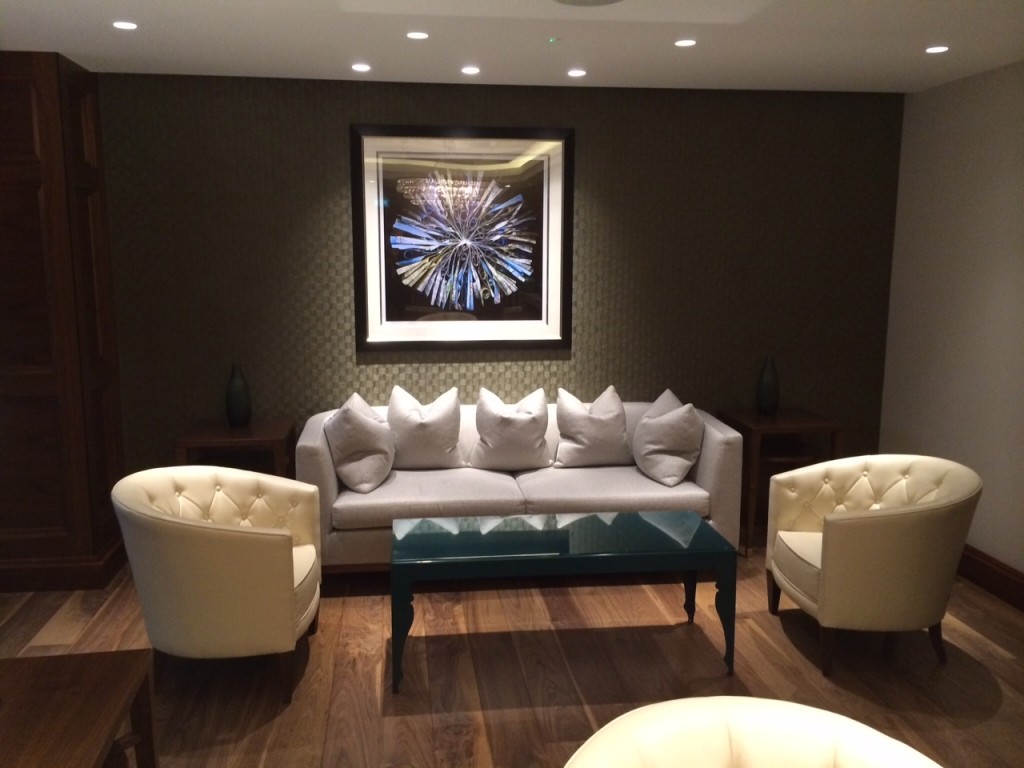 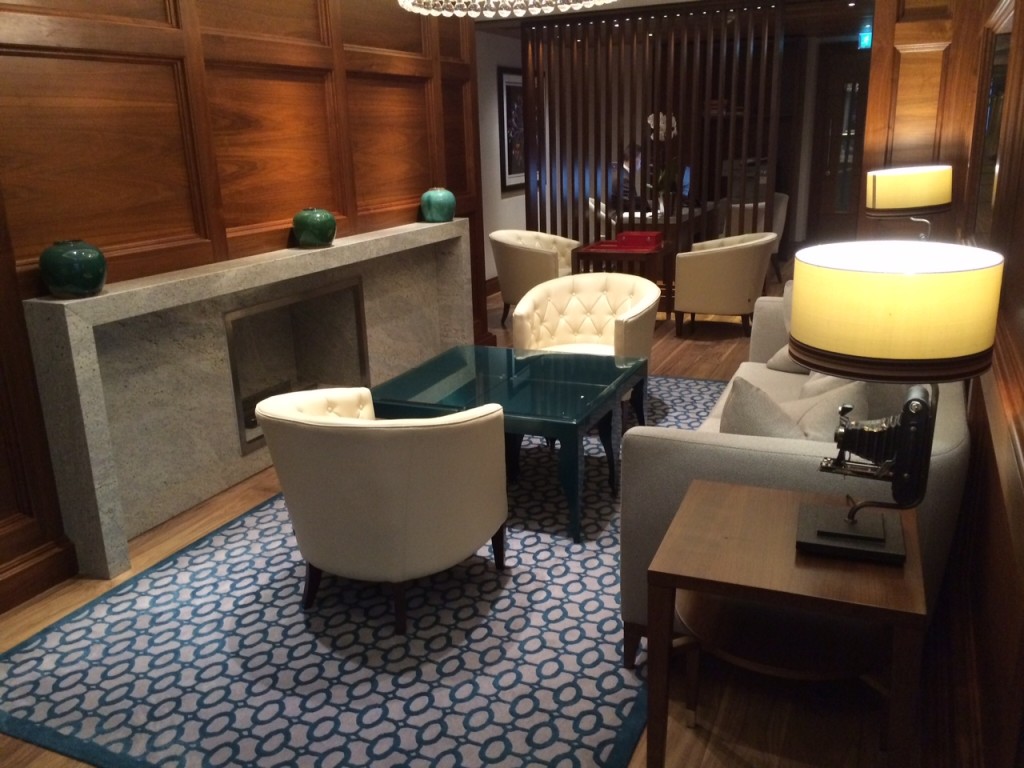 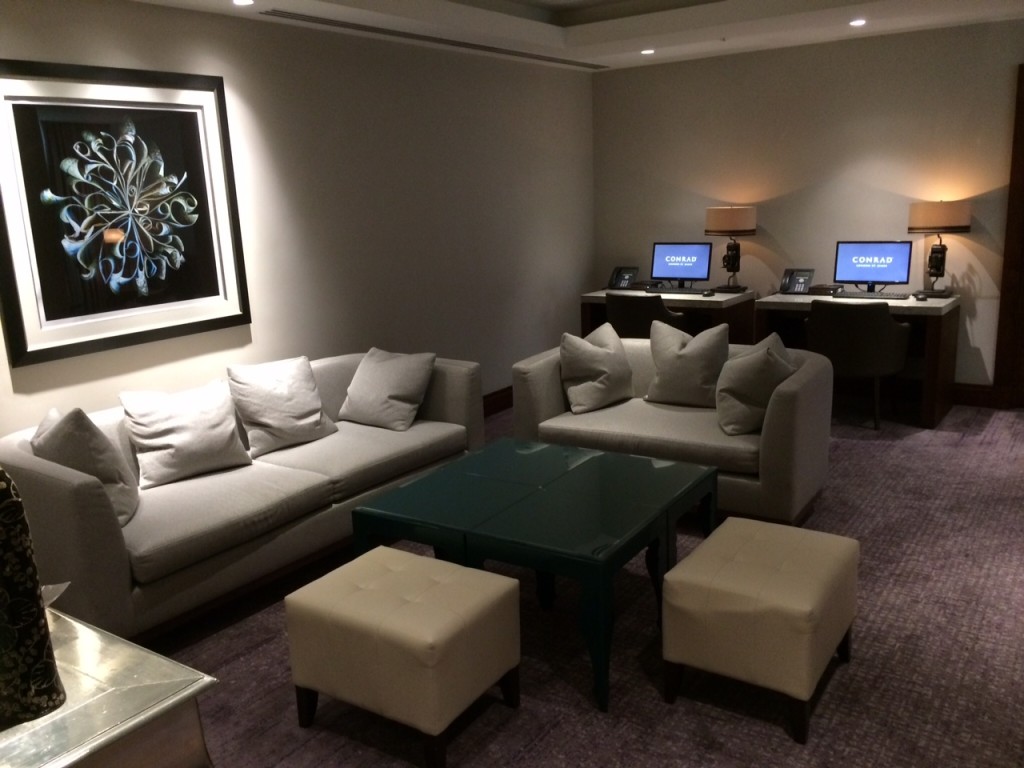 Food is laid out on a long bar.  During the afternoon, a selection of cakes were available:

From 5.30 to 8, the drinks cabinet is opened and a selection of beer, wine and spirits is available.  The staff are excellent and continually ensure that your glass is topped up.  The selection below is only part of what is on offer. 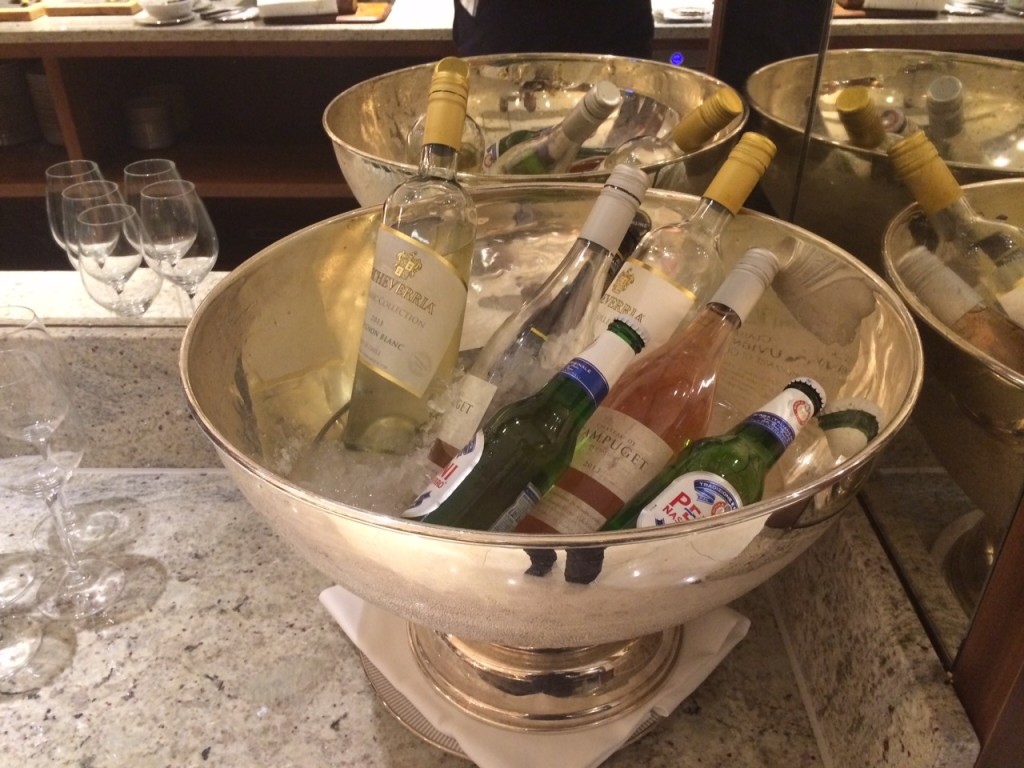 The complimentary food, served until 7.30, was enough to keep me going for the evening.  There were three cold snacks: 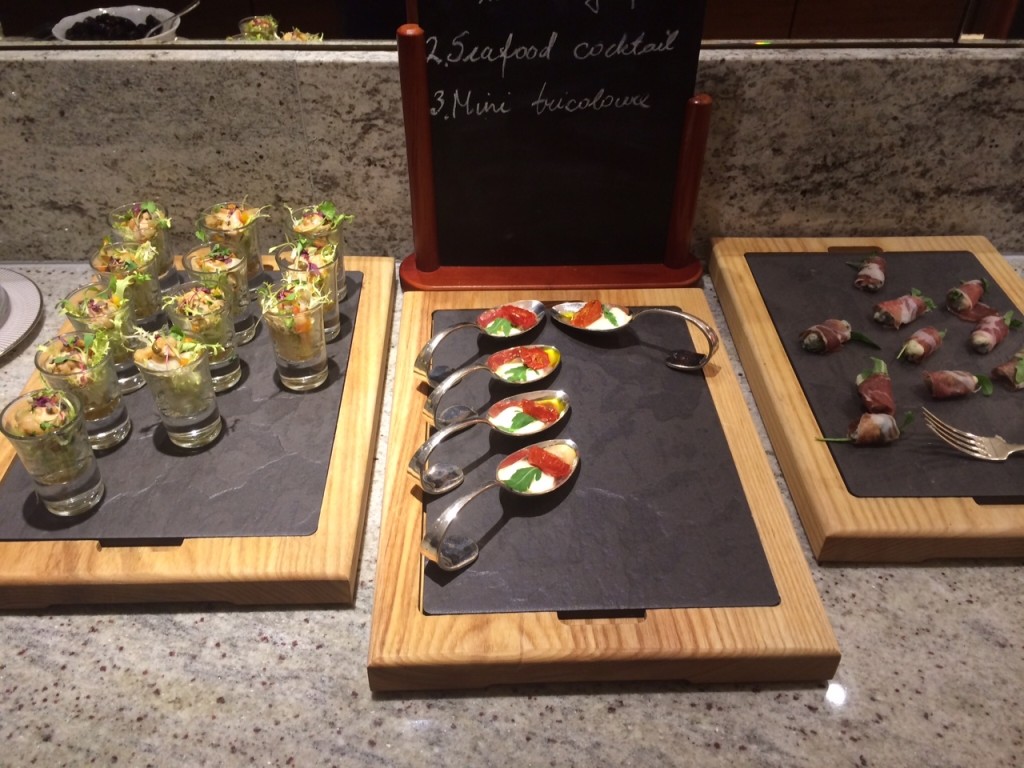 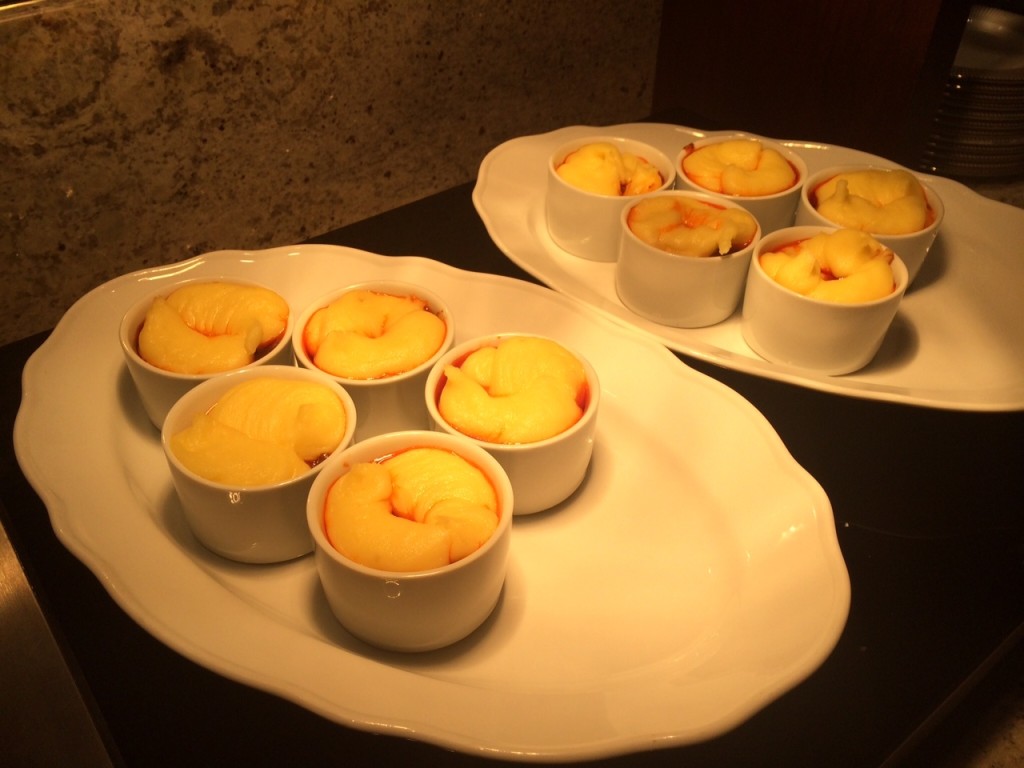 I took breakfast in the main restaurant at Conrad London St James, which is designed as a steak house.  It is very pleasantly designed: 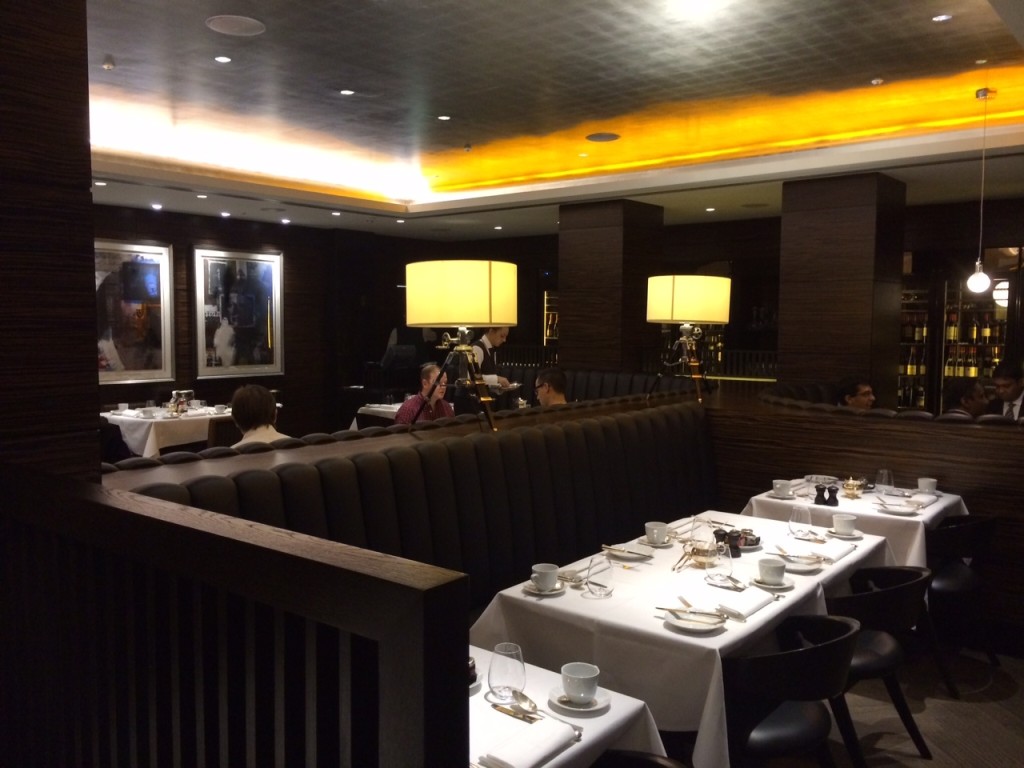 There is a decent buffet selection along with a list of cooked to order items which are available at no extra cost.  I had a salmon omelette which was excellent. 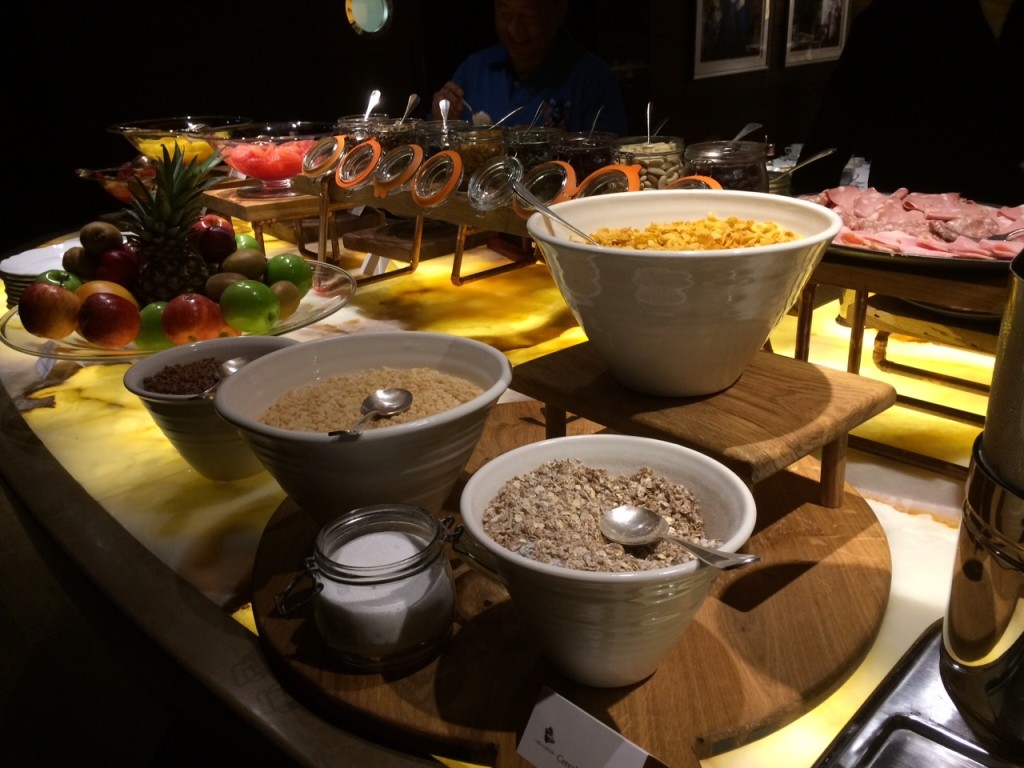 Finally, here are a couple of shots of the bar: 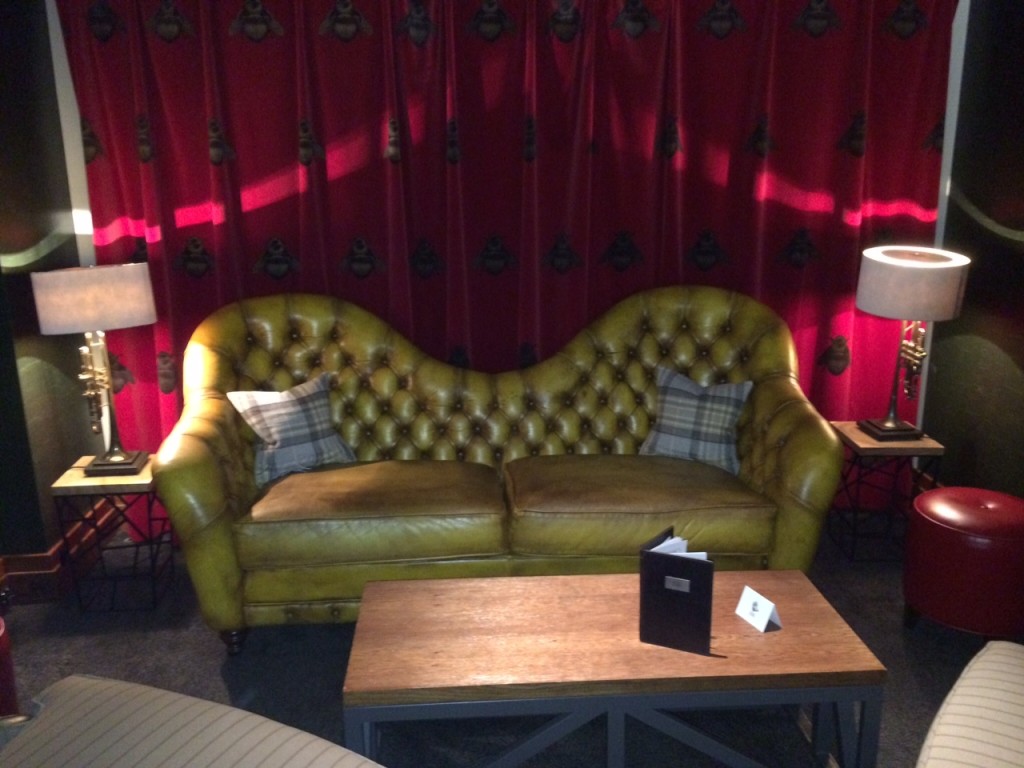 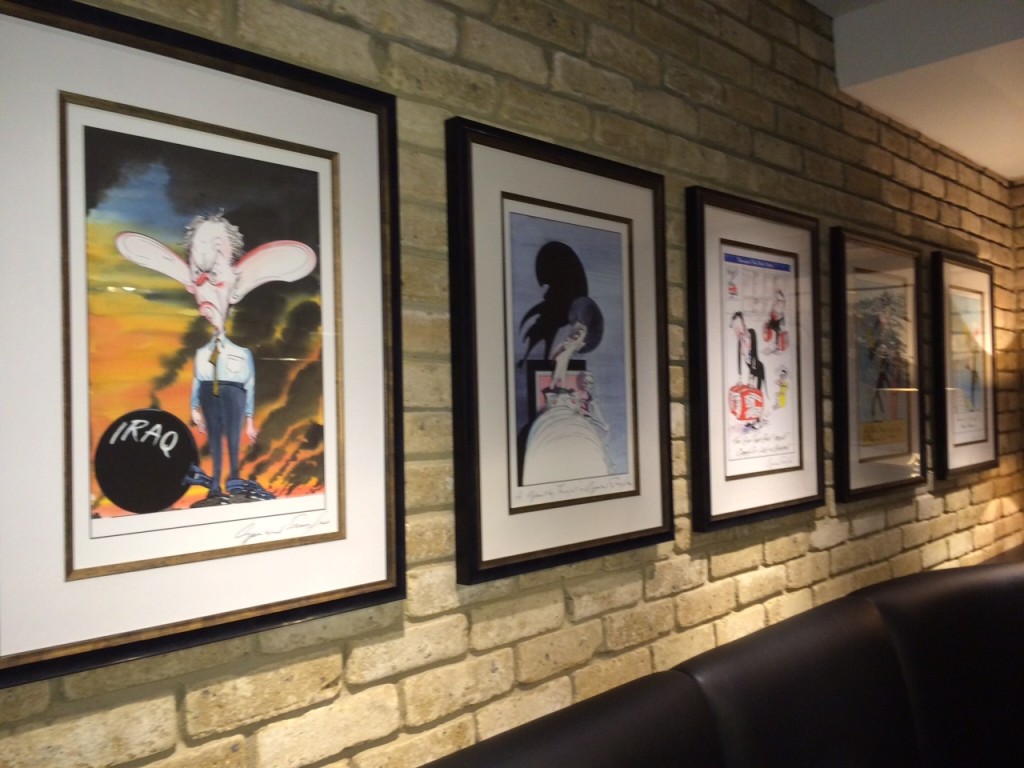 …. and here is the seating area off the lobby which is a lot larger than this photo implies: 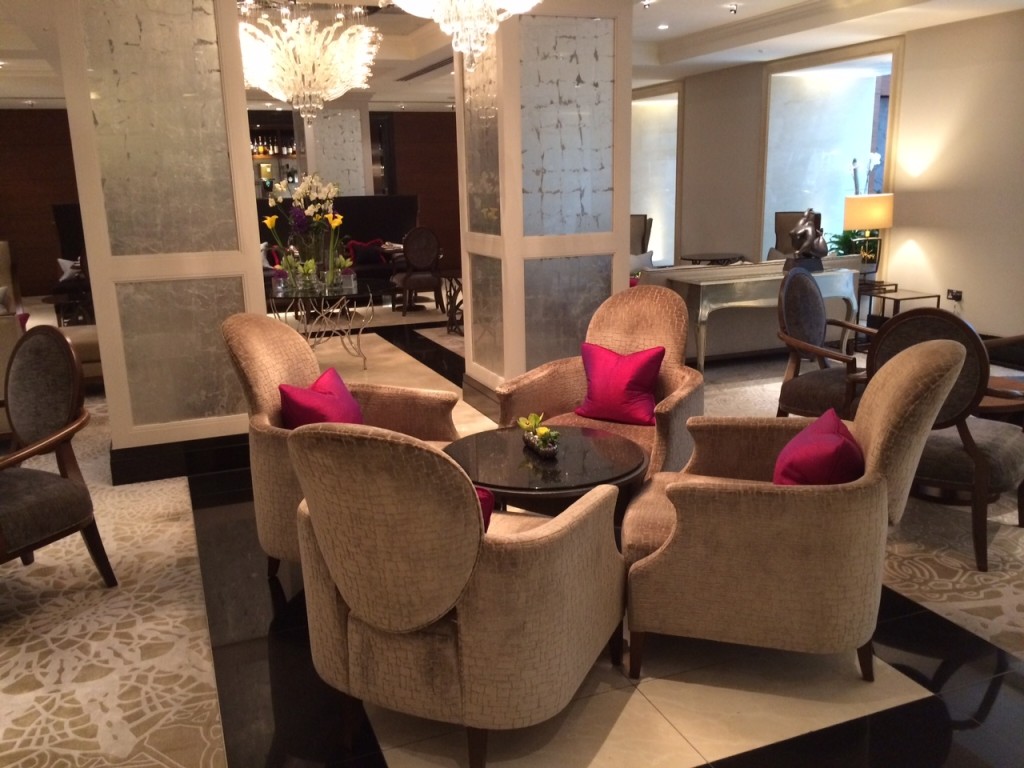 Having spent literally 24 hours here (I took a 2pm Hilton Gold late check-out) I have to say that Conrad London St James is a very accomplished property.  The bar, restaurant, lobby bar and lounge are all well designed and, for want of a better word, ‘cosy’.  I was also impressed by my King Executive room – although I cannot guarantee that smaller rooms will have all of the same facilities.

The location is a little out of the way, but with a District Line tube station opposite (and Victoria within a five minute walk) you can get to pretty much anywhere relatively quickly.  My only big concern was the weak mobile signal in my room.

Without a doubt, this is the best Hilton Group property in London and is well suited for business or leisure.  At 80,000 Hilton HHonors points per night it is expensive but ‘points and money’ rooms on certain nights are a great deal at 32,000 points + £98.  It would also be a great way to use the free night voucher that comes with the Hilton HHonors Visa card – Billy Elliott and Wicked are very close if you want a night out that is only a short stroll back.

The Conrad London St James website is here if you want to find out more.