The Curve card, launched yesterday into public beta, is a radical new sort of payment card.  It takes some of the best features of Supercard (which has still not launched publicly) and adds a few new twists which are bound to appeal to the Head for Points loyalty credit card readership.

Most relevant for our market, it allows you to pay for anything where a MasterCard is accepted and have it recharged – as a purchase – to an American Express card.

Even cash withdrawals are recharged, as a purchase, to your Amex.  I have been testing the card for a few days and I can confirm that this works perfectly.

Let me repeat this bit – you can buy something using the Curve card at a retailer which only accepts MasterCard, or even make a cash withdrawal at an ATM, and it will be re-charged to your American Express card (or a Visa or MasterCard) as a purchase.  It will earn miles, points or cashback and count towards any sign-up bonus.  It also works abroad, even on overseas cash withdrawals.

You must have an iOS smartphone to join up.  Android will follow later in the year but, for now, you will be missing out – sorry!  An iPad would also work – the only purpose of the app is to load up details of your other credit and charge cards and to check your transactions.

Curve is required to target the small business market rather than the personal market, although their description of “bliss for entrepreneurs, freelancers and small business owners” is a very broad one. 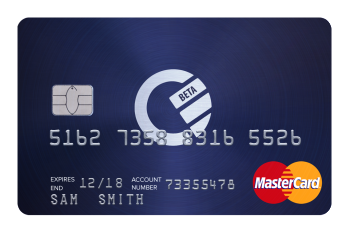 This is how it works:

You download the Curve card app to your iOS device

You link as many other Visa, MasterCard and American Express cards as you wish to the app

You can then use your Curve card in shops or in cash machines.  The transaction shows in the app and is recharged to your underlying card as a purchase.

Last Friday, for example, I withdrew some Euros from an ATM at Frankfurt Airport using my Curve card.  The transaction is already showing, as a purchase with Avios earned, on my BA Amex statement.

Can I use the card everywhere?

You are limited to transactions which can be processed using a prepaid MasterCard.  I tried to pay my Amex bill with it, as a test, and it failed.

It is not clear what happens if you use the card as security at a hotel or for car hire rental, as a prepaid MasterCard is normally blocked in those circumstances.

I am assuming that it does work OK as a debit card (and thus, for example, avoiding the £5 British Airways credit card fee) but I haven’t tested it yet.

What about Section 75 refund protection?

Similarly to PayPal [….] 3rd party purchases, using Curve is not a direct purchase from the user’s original card, so the purchases are not covered by Section 75 of the Consumer Credit Act.

However Curve users are protected by MasterCard chargeback rights where refunds can be provided if goods are damaged, not as described, or the merchant has ceased trading.

What are the fees?

The Curve card is not entirely free, but you may find that you can avoid their fees depending on how you use your card.

Purchases made in the UK – FREE.  Remember that Curve means that you can effectively use American Express EVERYWHERE that a prepaid MasterCard would be accepted.

Purchases made outside the UK – 1% fee.  This compares with the standard 3% fee on 99% of UK credit and debit cards.

Cash machine withdrawals in the UK – FREE.  Yes, you can withdraw cash from a UK ATM and will appear on your Amex or MasterCard as a purchase, earning you miles and points and counting towards any sign-up spend target.

Cash machine withdrawals outside the UK – £2 fee plus 1% FX fee.  If the ATM itself charges a fee, as often happens in the USA and some other countries, this will obviously be added on.

How does this compare to using a card with no FX fees such as the Post Office or Lloyds Avios card?

In terms of making purchases abroad, you will – purely in terms of £ charged to your card – still get a better deal with the Post Office Platinum Money (free, review) or Lloyds Avios Rewards (£24, review) cards.  This is because Curve adds a 1% FX fee which those two cards have no FX fee at all.

However, if you want to put your spending onto a card other than the Post Office or Lloyds Avios then it is a no-brainer to use Curve abroad.  For working towards your BA Amex 2-4-1, for example, you will save 2% on every overseas transaction when you use Curve instead of paying directly with the BA Amex.

You also need to remember that Amex acceptance is rare in many European holiday areas and Curve is the only route to generate Amex spend from these transactions.

Should I use the Curve card for all of my UK ATM withdrawals?

Absolutely.  Withdraw £100 in cash using Curve and it will go through your American Express or other linked card as a £100 purchase.  This will earn you, on a BA Amex, Avios points plus count towards your BA 2-4-1.

Note that ‘fair usage restrictions apply’.  I suspect that anyone withdrawing more than a couple of hundred pounds a week may find their card blocked.

How does Curve make money?

As the card is aimed at business users, the Curve card is not impacted by the EU cap on interchange fees.  There are also plans to offer additional services to users in the future.

What is the difference between the £35 and £75 Curve cards?

They seem to have screwed this up, to be honest.  There are two versions of the Curve card, a blue one and a black one.  The only difference is that the black one, which costs £40 more (a one-off fee, not annual) will apparently earn double rewards in the Curve loyalty programme.  As that programme has not yet been launched, however, it is impossible to know if you’d get £40 of value from it!

In terms of what the card does and the fees you pay to use it, both are identical.  The £35 version should do the job.

As a temporary offer, you will receive a free Tumi leather card case, worth £60, when applying for the £75 version.

Remember that you get £10 back as a credit when you sign up via my link, or any other refer a friend link.

Who is behind Curve?

The company is an independent start-up, but primarily funded by the backers of TransferWise.

What have I learned from the beta?

As I mentioned, I have had the card for the past few days and have been trying it out.

My biggest issue is that the app does not show the original foreign currency value of overseas transactions.  All you see is the £ equivalent.  I am told that this will be added to the next release but it seems to be a major oversight. (EDIT, March 2016: this information has now been added to the app.)

There is also an issue with how American Express transactions appear on your card statement.  MasterCard and Visa purchases made using Curve, as with Supercard, show on your statements using part of the original descriptor so you can still identify what a particular payment was for.

Amex transactions simply show on your statement as ‘Curve London’.  To work out what each transaction represents, you need to open the Curve card app – which shows the original description, eg WH Smith Heathrow – and manually match up transaction values.

I should make clear that every transaction (purchase and ATM withdrawal) I have used it for over the last 5 days in the UK, Germany and Austria has gone through without a problem.

How do I join Curve?

You can sign up here.  This link includes my referral code so you receive £10 credit.

(If you decide to sign up via the app, please add my referral code when prompted of oqb4J)

Remember that the card is aimed at “entrepreneurs, freelancers and small business owners” and you will be asked to say that you fall into one of these boxes.

Only 10,000 applications are being accepted at this stage – I suspect the HFP community will account for a fair % of these.  You will not receive your card until April.

Remember that you must have an iOS smartphone or an iPad to take part and that there is a £35 one-off fee.

Curve is still in beta mode for the next few weeks and, as I mentioned above, the app is still missing some of the functionality which it advertises.  This is a very interesting product however and I’m sure those HFP readers who qualify to get one can see the value in getting one when it comes to maximising their miles and points.

The application page is here.  If you use the app to apply instead of a desktop, please add my referral code of oqb4J.

Thanks to my resident credit card expert Andrew Seftel (@andrewseftel) for his help with this article.  The Curve card links in this article include my refer-a-friend code, which means that you will receive a £10 sign-up credit.