Barclaycard sent out letters to holders of the IHG Rewards Club and IHG Rewards Club Premium visa cards yesterday informing them that the cards will be closed on 26th April.  Points will only be earned on transactions made by 20th April.

This is not a totally surprising move, as the contract to operate the IHG credit cards moved to Creation last year.

What IS surprising is the notice given – six weeks.

In particular, I am surprised that no compensation is being offered for anyone part-way through meeting their £10,000 of spending on the Premium card to get the free night voucher.

This is, to be honest, not acceptable.  Barclaycard would almost certainly have known, from the day that Creation took over the contract, that it would stop servicing the existing IHG cards on a specific date in the future.  It is wrong that cardholders should have been duped, for want of a better word, into putting spend onto the Premium card when Barclaycard knew they would never reach the £10,000 in time.

If you have the Premium card and will not be able to trigger your IHG free night voucher by 20th April, I would seriously consider making a formal complaint to Barclaycard.

The maths is simple:

If Barclaycard does not settle, I would escalate your complaint to FOS.  I struggle to believe that they would not find in your favour.

Existing Barclaycard IHG cardholders are being moved to either the Platinum or Freedom Rewards cards.  This seems to be based on how keen Barclaycard is to keep you.

You will receive a pro-rata fee refund on your IHG card from 26th April until the end of your current card year.

I would be tempted to cancel at this point and look for a more suitable Visa or Mastercard instead.  The rest of this article looks at the IHG options.  My second article today looks at the non-IHG alternatives.

Should I take out the Creation IHG cards?

Fundamentally, yes.  If you were happy with the Barclaycard IHG cards then you will find that the Creation cards are virtually identical as I outline below.

This is a bit of a pain for big spenders.  It also creates issues for anyone who does not want to pay another year of membership fee.  You are forced to wait until your voucher appears and then challenge Creation over whether you are due the bill for the new year or not.  (If you don’t use the card after your renewal date, you have a good case for getting the fee waived.)

One upside is that the free Creation card gives double points for foreign spend.  Under Barclaycard, only the Premium card had this benefit.

You will also get another sign-up bonus for applying, which can’t be bad.

How do the two Creation IHG cards compare?

If you have the existing Barclaycard cards you will find the details below very familiar.  I have written this mainly for the benefit of anyone thinking about getting an IHG credit card for the first time.

There are two different versions of the card.  It isn’t clear if you are allowed to have both as the benefits overlap – one gives Gold status whilst the other gives Platinum. 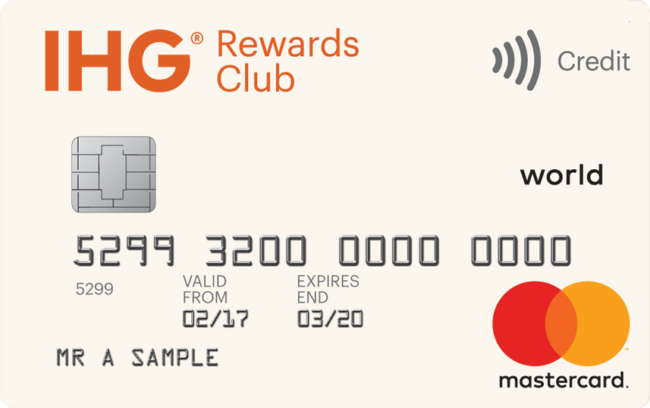 The headline features of this card are:

10,000 IHG Rewards Club points for joining and spending £200 in the first three months – these are worth about £40 of free hotel room or transferable to 2,000 Avios points or other airline miles

Gold status in IHG Rewards Club for as long as you hold the card.  You won’t get much, frankly, for being Gold – usually a few hundred bonus points or a free drink.  However, if you do a few Holiday Inn, Holiday Inn Express, Crowne Plaza or Indigo stays then it is certainly better than nothing.

2 IHG Rewards Club points per £1 when you pay at IHG hotels.  This would be roughly a 0.8% return which is good.

2 IHG Rewards Club points per £1 when you use the card abroad.  This is a new benefit – only the premium card got double points abroad under Barclaycard.  However, as the card has a 2.99% FX fee you would be better off using a card without FX fees instead. 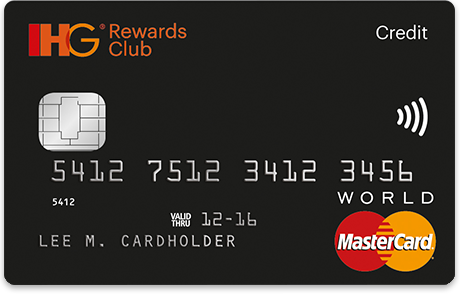 The headline features of this card are:

20,000 IHG Rewards Club points for joining and spending £200 in the first three months – these are worth about £80 of free hotel rooms or transferable to 4,000 Avios points or other airline miles

Platinum status in IHG Rewards Club for as long as you hold the card.  This is no longer the top level following the launch of the Spire tier.  However, if you do a few Holiday Inn, Holiday Inn Express, Crowne Plaza or Indigo stays then it is worth having.  It is occasionally enough for a Club room upgrade at a Crowne Plaza.

4 IHG Rewards Club points per £1 when you pay at IHG hotels.  This would be roughly a 1.6% return which is very good.

4 IHG Rewards Club points per £1 when you use the card abroad.  As the card has a 2.99% FX fee you would be better off using a card without FX fees instead.  I only value the points at 1.6%.  The only reason to use the card abroad would be to work towards your free night voucher or earn additional IHG status points.

A free night voucher for any IHG hotel for spending £10,000.  Use it at the InterContinental Paris, London, New York etc and you could be looking at £250 of value.

With either card, there is a minimum income requirement of £10,000.

According to the terms and conditions:  “If your IHG Rewards Club Credit Card account is closed within the first 6 months of opening, IHG reserves the right to deduct [sign-up] Rewards points from your IHG Rewards Club account.”  As you do NOT get a pro-rata fee refund for cancelling, this is unlikely to be an issue for anyone.

What do I think?

If you are ONLY looking to exploit the sign-up bonus then the £99 card is not the card for you.  You would be mad to pay £99 for a sign-up bonus worth £80 at best, especially as the points do not count towards status.  You should focus on the free card where the smaller 10,000 point sign-up bonus is worth £40.

For long term spending, however, the Premium card is very good.   I had the Barclaycard version of this card for a couple of years and I put a lot of money through it, including tax payments.

Those points count towards status, which could be important if you are pushing for Spire Elite

Your free night voucher, worth say £250 if used at an expensive InterContinental

You also need to add in whatever value you ascribe to Platinum status in IHG Rewards Club.

I have renewed my Spire Elite status for 2017 almost entirely down to credit card spending.  Reaching Spire Elite via 75,000 status points triggers a bonus of 25,000 IHG Rewards Club points.  You could argue that this is an additional bonus for anyone who spends £37,500 on the card.

If you are looking for a new Visa or Mastercard and you have the ability to put £10,000 of spending through the card to trigger the free night, I would recommend it.

I would NOT necessarily recommend it if you will not spend £10,000 to earn the free night.  For low spenders, the higher earnings rate does not justify the £99 fee compared to the free IHG Rewards Club Mastercard.  The only exception is if you stay enough at IHG hotels to benefit from Platinum status but you don’t stay enough to actually earn it from your stays.