Regular readers will know that we have reviewed the two new airport lounges at London City Airport in recent months.  Based in the private jet terminal at the airport, the (landside) Business Class reviewed here costs £35.  The First Class Lounge reviewed here, which includes private passport control and being driven to the steps of your plane, costs £95.

easyJet has clearly been taking notice, because it has announced a similar deal at Luton Airport with Signature Flight Support.

You can now arrive and depart from the new Signature Flight Support private jet terminal at Luton.  You can park at the terminal, which includes its own customs, immigration and security screening facilities.

You can then relax in Signature’s lounges until it is time for your flight.  As at London City, you will driven across the tarmac directly to your easyJet flight where you can board at your leisure while your luggage is transferred to the aircraft.

So far, so interesting.  The cost is a bit of a shock though – £475 for one person and £120 for each additional person in the group.  Given that London City offers a virtually identical service for £90, I think the appeal will be limited.  That said, if the artists impression below of the new facility is accurate, it does look classy.

You can read more on the easyJet website here.   Let’s see if Signature will let us test it out …..

PS.  We are hoping to run a competition on HFP soon to win passes for the First Class and Business Class lounges at London City – keep an eye out. 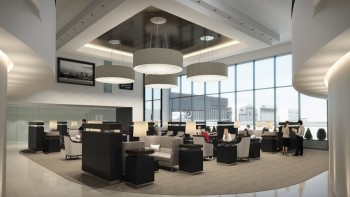 A quick heads-up that we are giving away three nights at the brand new, very luxurious, The Address Boulevard hotel in Dubai on Monday.  This is worth around £1,000.

We originally raffled this at the Head for Points Christmas party last December.  The winner is unable to use it, however, and The Address has generously extended the deadline in order to let us re-offer it.

So, if you can spare 3 nights for a mini-break in Dubai before the end of November, make sure you take a look at HFP on Monday or Tuesday.