This is my review of the Park Inn Palace, Southend on Sea, hotel.

I have never stayed in a Park Inn before.  I have ‘stayed’ in a Park Inn, on a mattress run for the purposes of accruing 50,000 Radisson Rewards bonus points (and you may soon be doing the same if you take part in the new ‘Free Friday’ promotion) but I’ve never spent more than 20 minutes in the room.

We were invited to a barbeque in Southend on Saturday.  Finding decent quality, sensibly priced accommodation in a seaside town for a Saturday night in late June was never going to be fun.  The Park Inn Palace seemed to fit the bill.

Park Inn is a three star brand owned by Rezidor, who also operate Radisson Blu and Park Plaza.  If you needed to rank these brands, I would put Park Plaza up against Crowne Plaza, Radisson Blu against Hilton and Park Inn against Holiday Inn Express.

The Park Inn by Radisson Palace Southend on Sea, to give it its full name, looked fine:

Secondly, the location was great

Thirdly, whilst I was pretty sure they had some poor rooms, I hoped my Club Carlson Gold card (free via my American Express Platinum card) would get me something pleasant

Lastly, it is a conversion of a massive Edwardian seaside hotel (The Palace) and, like many people, I have a soft spot for those.  There is a plaque in the lobby commemorating a stay by Laurel & Hardy back in 1932!  Going even further back, here is a BBC clip showing it as a hospital during World War I. 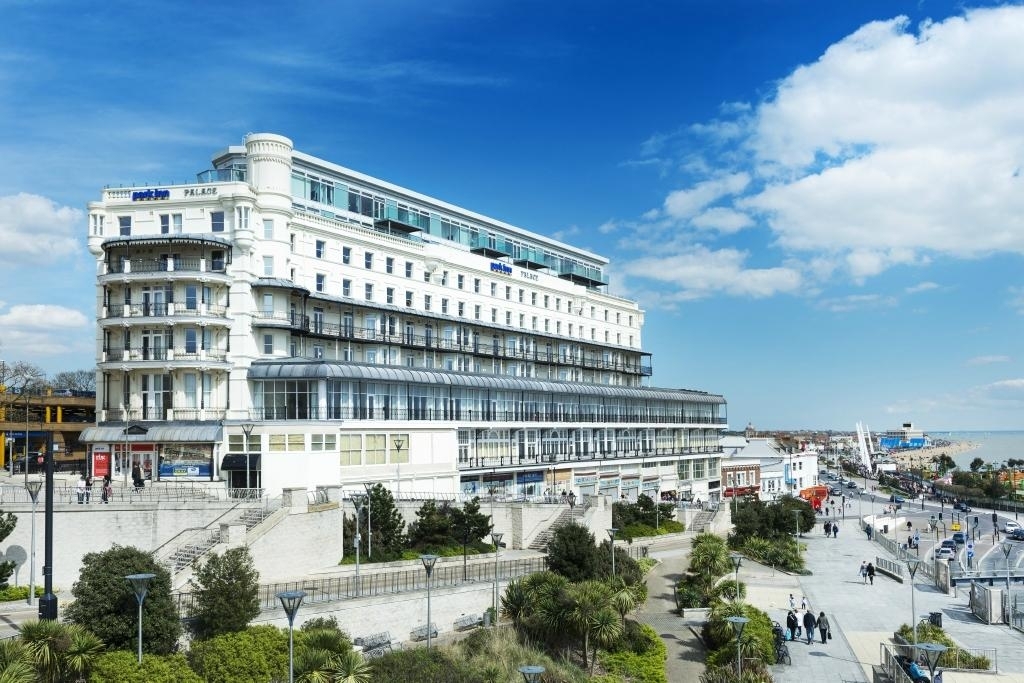 We had two standard rooms at 38,000 Club Carlson points each.

The cash rate was £166 when I checked last week, although it may have been a little less at the time we booked.  This works out at 0.43p per Radisson Rewards point which is excellent value.

If I had booked entirely via a conversion of Amex Membership Rewards points at 1:3, I would have received an impressive 1.3p per American Express point.

At this point, I have a confession to make.

I really wasn’t expecting much from the Park Inn Southend hotel, even though I had seen decent reports.  I was already thinking about how I could write a Fawlty Towers-style review on how it lived up to all of the cliches of British seaside hotels.

But it didn’t.  We really liked it.

Here is the view from our balcony, which was on the third floor.  It is probably the best sea view I have ever had from a UK hotel, although that isn’t saying much!

My kids have been around a bit, but they have never been more enthusiastic about a hotel room than when they saw that we had a balcony overlooking the sea and a massive fun fair and the longest pier in the world: 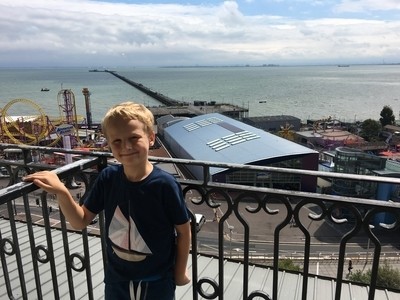 Here is the room itself.  This is a twin bedded room because we did a ‘1 adult 1 child per room’ set-up – you might find the twin beds a little close together in other scenarios but it was fine for us: 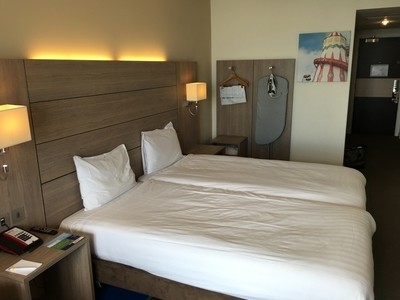 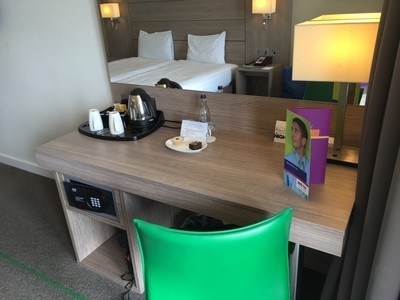 …. and an acceptable bathroom with a shower: 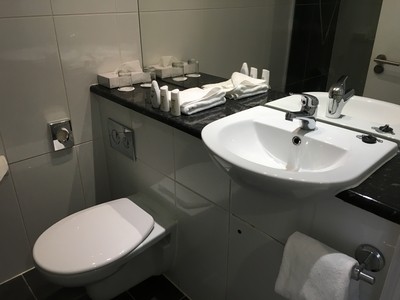 The Park Inn Southend was all perfectly fine.  There was honestly nothing to complain about.  Not everything was perfect – the aircon was noisy, for example, but not needed anyway – but for the star level I was very happy.

There was also minimal external noise, despite the funfair, due to good double glazing and the fact that the Southend Saturday night pub route does not seem to take people past the hotel.  The fun fair closes at 10pm on a Saturday anyway: 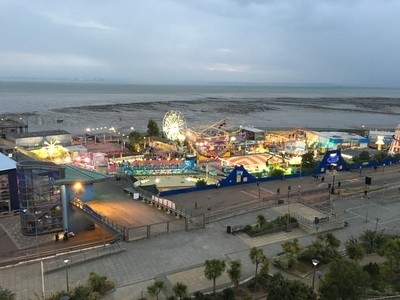 I have Gold status in Radisson Rewards due to my American Express Platinum card.

It isn’t entirely clear what I received at the Park Inn in Southend due to my status and what is ‘normal’.  However:

whilst there were dispensers with ‘3 in 1’ shampoo / shower gel / conditioner in the bathrooms, we were also given individual bottles of Dove-branded products

we got a free chocolate brownie, Bakewell tart and bottle of water in each room

There would also have been a 15% discount on food in the restaurant if we had used it.

The public areas of the Park Inn Southend were equally attractive.  Here is the rather funky hotel lobby: 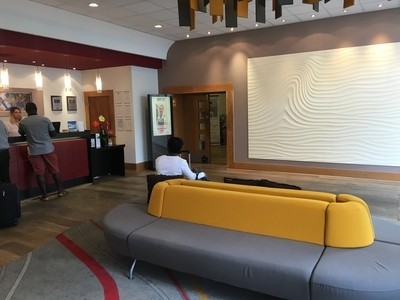 Here is the bar area: 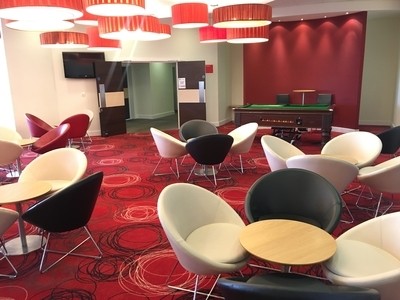 Here is the restaurant / breakfast room – this is an ‘official’ hotel picture: 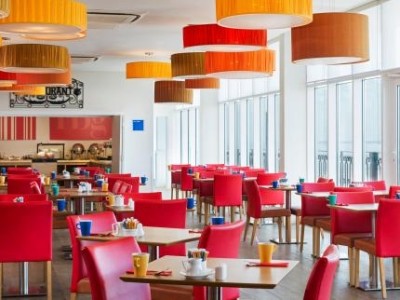 Someone has put real thought into this hotel.  The imaginative way that the buffet had been laid out and presented was the sort of thing I would have expected in a five-star hotel, not a three-star.  It was miles away from the Holiday Inn Express approach to a breakfast buffet.

You need to time your breakfast, though, as they don’t have enough tables to cover the flow at peak times on peak days.  Staff were very efficient at cleaning tables and resetting them as people left, although they were a little slower at refilling buffet items.

Irrespective of the view from your room, you will get a great view over the pier, fun fair and sea / estuary from the glass-walled dining and bar area.

Looking at the photos at the top of the page, you might think that the Park Inn Southend is huge.  It isn’t.  The modern floors on the roof are apartments and not part of the hotel.  The building also contains a casino which is totally separate.  The hotel only has 137 rooms so it isn’t too busy.

The Park Inn hotel in Southend is one of those hotels that had always interested me – I have been using a photo of it to illustrate articles on Park Inn every since HFP started – and it was great to finally review it properly.

I was genuinely impressed by what I found, and Park Inn has done a great job given the 3-star level it is aimed at.  Southend on Sea is only a 45 minute train ride from Liverpool Street, Fenchurch Street, West Ham, Limehouse, Upminster or Barking and, if the sun is out, it isn’t a bad place for a day out if you have kids.   With a train every 10 minutes or so, you don’t get the overcrowding that you find on Brighton services on Summer weekends.

The Park Inn Palace, Southend website is here if you want to find out more.