Loganair operates flights to the Highlands and Islands of Scotland, primarily from Glasgow, Inverness and Edinburgh.  It is probably best known for its service from Glasgow to Barra, where the plane lands on the beach and the flight times are adjusted to the tide table (photo below).

Loganair and Flybe are ending their franchise agreement on 1st September 2017.  From that date flights will operate under the Loganair brand. 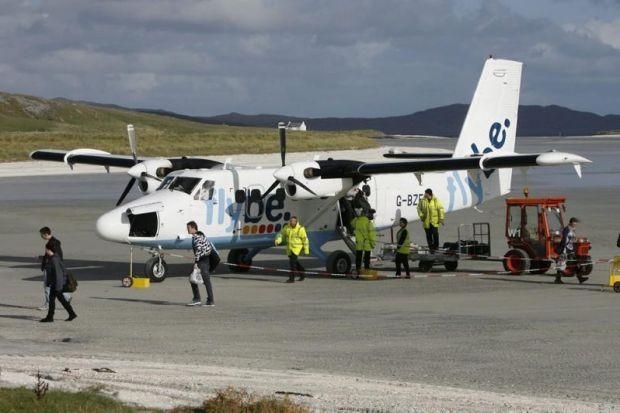 When this news was first reported in November 2016, it was said that the British Airways codeshares would remain in place.  This would allow you to, for example, book through tickets from Heathrow to Sumburgh in Shetland via Edinburgh.

It wouldn’t have been a perfect arrangement.  Unless Loganair signed up as an Avios partner, you would not have been able to redeem Avios on these routes.  You WOULD have been able to continue to earn Avios and British Airways tier points as long as you booked revenue tickets under a BA flight code.

But nothing has been announced ….

1st September is now getting very close.  There have been no announcements from British Airways about what is happening.

As far as ba.com is concerned, destinations such as Barra simply disappear from the BA route map in three weeks time.  The flights will still be operating – and will be bookable on the Loganair website – but not as a BA codeshare.  This will create issues over through-checking of luggage and of course you won’t earn any Avios or tier points.

Last week, a statement appeared on the Loganair website.  All it says – stripping out the waffle – is “Loganair has confirmed that it is in discussion with British Airways on an expanded code share agreement, with a view to its introduction in the near future.”  On the upside, the statement implies that we could eventually see a broader deal than the current one which does not cover all Loganair routes.

More confusion as Flybe launches a partnership with Eastern Airways

Clearly annoyed at losing its deal with Loganair, Flybe has agreed a joint venture with Eastern Airways.

Eastern will use four of its aircraft to operate the following new routes, using Flybe branded aircraft and with tickets sold via the Flybe website.  The joint venture covers services from:

Eastern / Flybe will now operate in direct competition to Loganair on these routes.  The strategy is that flyers will remain loyal to the Flybe brand that they have used for the last eight years.

These flights will launch on 1st September.

It appears that these six routes are not available for Avios redemption, despite the Avios deal with Flybe.  You will be able to earn Avios on these flights at the standard Flybe rates although it is not possible to earn British Airways tier points.