This is my review of the Qatar Airways business class Qsuite ….. sort of.

We covered the launch of the brand new ‘closing doors’ Qatar Airways business class Qsuite product at the ITB travel show in Berlin back in March – see here. It is slowly being introduced onto the Qatar Airways 777 fleet, with London a priority route, but I won’t have the opportunity to fly it for a while.

Last week Qatar Airways invited me down to Heathrow Terminal 4 for lunch – in the Qsuite!  The airline had jiggled its timetable to allow a longer than usual stopover for the aircraft in London, allowing a group of guests to see the Qsuite at first hand.

I was very impressed.

This is, without a doubt, the most ambitious business class seat on the market – a private suite with closing doors for every passenger. What is most impressive, however, is the way that the layout does not just cater for the solo business passenger.

One potential problem with ‘herringbone’ business class layouts, as used by Virgin Atlantic, Cathay Pacific and even Qatar Airways on the 787 and A380 fleet, is that they work less well for a couple or a family. The middle pair of seats face away from each other, which is not ideal for a couple, and there is only a single seat on each side by the window.

For families it is even trickier, because herringbone seats – by virtue of being private – mean that you can’t easily keep an eye on your kids.

(Whilst British Airways Club World has a lot of detractors, the truth is that if you’ve got two kids it is fantastic. Unless you’re on a 787 – where the layout is 2-3-2 – the 2-4-2 layout means that you can put your kids in the ‘double bed’ in the middle, where they have floor space for playing or for their stuff, with a parent on either side.)

Qsuite works for everyone. As well as suites for solo travellers, the pairs of centre seats can be converted into either a double bed or a 4-seat suite.

From an economic point of the view, the impressive thing about Qsuite is that it takes up no extra space compared to the existing Boeing 777 seat layout. There are 42 suites / seats in the cabin, divided into two mini-cabins of 24 seats and 18 seats respectively.

Qatar Airways has been able to swap a standard seat for a full suite, in the same floor space, because your feet now disappear into a cubby hole under the seat in front. The suite itself is not that deep.

This is a photo of 10D where I was sat.  Click on any of the pictures to enlarge: 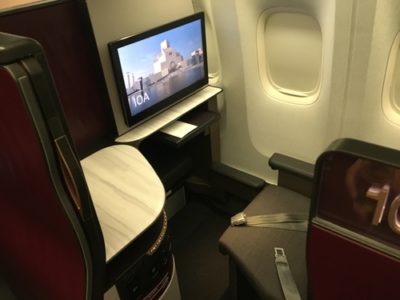 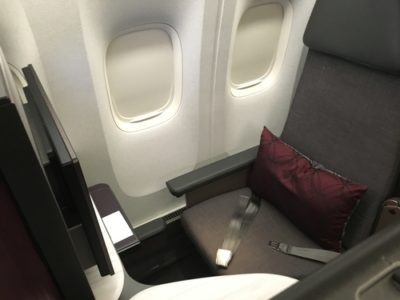 More impressively, here is a shot of a pair of seats made up into a double bed: 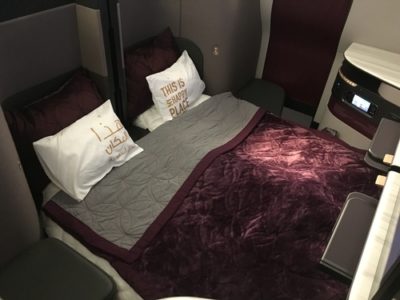 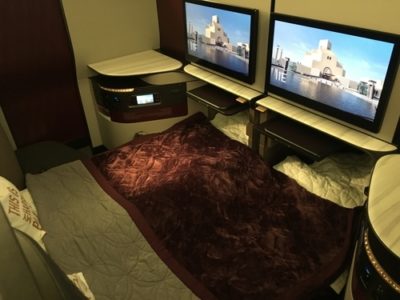 I don’t have any shots of the seats set up as a ‘group of 4’. These were in the other half of the cabin to where I was sat. This is how the cabin looks when the seats are all set up as individual suites: 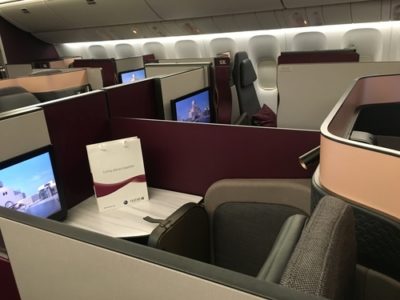 In terms of IFE, you get a very large and clear TV display: 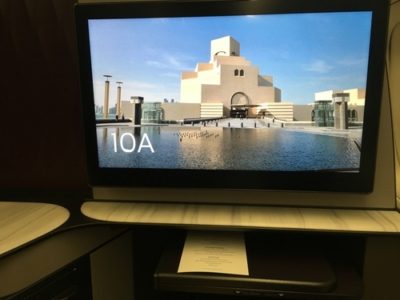 with this rather snazzy control panel / charging area / storage area on the side: 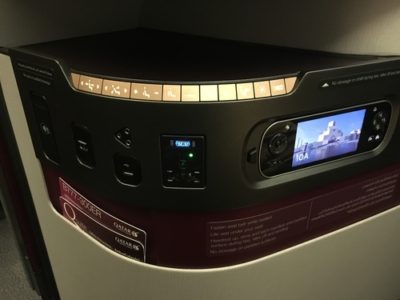 As you can see, there is a second small IFE screen built into the remote control.

There is also a floor level storage area by the side of the seat.

Here are a few shots of the lunch we were served. I am assuming that these meals are from the standard business class menu, as they were prepared in the galley from a standard catering trolley. 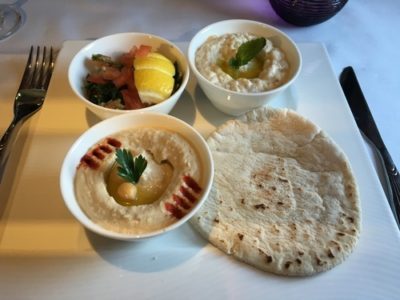 A main of Arabic spiced chicken breast with rise in cinnamon sauce: 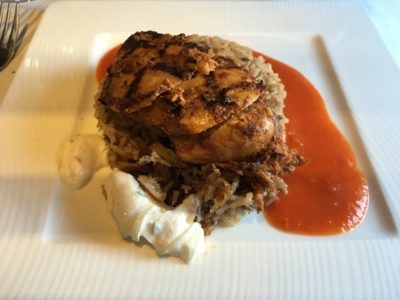 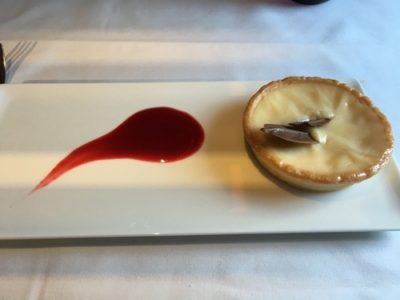 And that was that! We only had a limited amount of time on the aircraft, as it had to be re-cleaned before boarding began. I didn’t get to test out the recline on the seat. I also didn’t get to see how it felt with the suite doors closed, as they were locked open as would be normal for take off and landing.

Popping onto an aircraft for lunch is clearly not the same as taking a 6-hour flight. I don’t think I am pushing the boat out, however, to say that this is clearly a superior product to pretty much everything else on the market.

The Qsuite is currently only available on certain London services with Paris and New York launching soon.  Don’t be disappointed if you don’t get it, however, as I am also very positive about the A380 seats – especially the private bar – and the A350 and Boeing 787 seats.  The original Boeing 777 seats are not great but, of course, those are being replaced by Qsuite.

Here are links to my other Qatar Airways seat reviews –